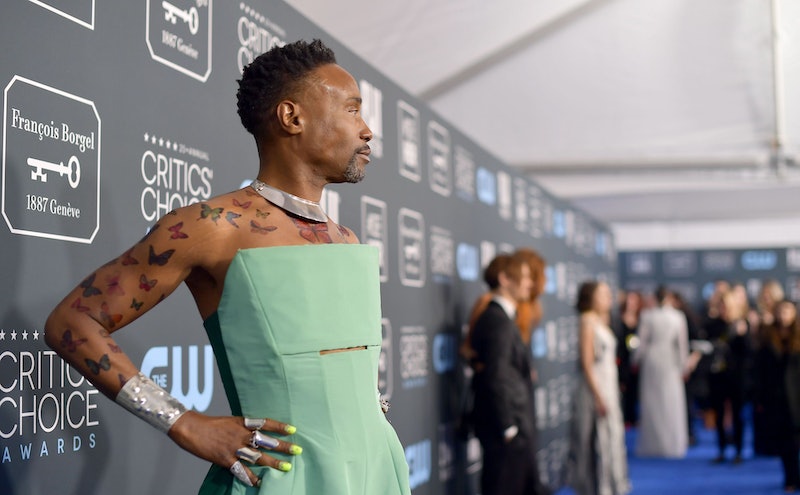 The 25th Annual Critics' Choice Awards (CCAs), held on the evening of Jan. 12, were abuzz with daring outfit choices from the stars in attendance. Most notably, there were a number of eye-catching jumpsuits at the Critics Choice Awards that held their own amongst the sea of gowns. The five looks below follow a trend that has seen stars move away from the "traditional" award season attire and towards a place of unbridled self expression, and I'm living for it.

Pose actor Billy Porter has acquired quite the reputation on the red carpet. And his look at the 25th CCAs proved why. Porter sported a sweeping wide-leg number in front of the cameras. Gliding with grace, he rocked this show-stopping design by Hogan McLaughlin with an array of colourful butterfly transfers, setting the experimental tone for the night.

Spotted on the runways of Christian Dior, Chanel, and Alexander Wang for Fall/Winter 2019, as well as in that scene from Fleabag, the jumpsuit is now a staple piece in any wardrobe. Alongside Porter, Mandy Moore, Kristen Bell, and Rain Phoenix rocked one-piece silhouettes last night that proved just as dazzling as a floor-length custom dress. From sweetheart necklines to caped creations, the jumpsuit marked its territory in a big way at the CCAs. And awards season has only jut begun.