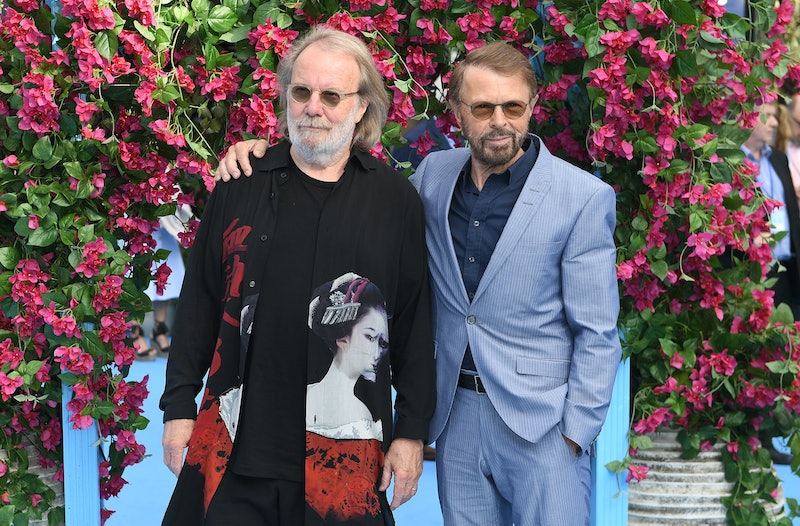 Mamma Mia! Here We Go Again isn't exactly your typical movie. After all, it's the sequel to a film that's based on a play that doesn't have a sequel and is itself based on the music of a Swedish pop group from the '70s. See? Not normal. The new movie is naturally looking to capitalize on the success of its predecessor, one of the most successful musical films ever released, and it's once again relying on the music of ABBA to do so. And just like in the first Mamma Mia!, there's an ABBA cameo in Mamma Mia! 2 you can spot if you're eagle-eyed enough.

The original Mamma Mia!, which came out in theaters back in 2008, earned $610 million at the global box office and became a massive sensation. ABBA's Björn Ulvaeus and Benny Andersson composed the music for the original stage musical, and both acted as producers on the original film. However, the pair's involvement with the first movie wasn't just relegated to their work behind the camera. Both Ulvaeus and Andersson also had memorable cameos in the 2008 Mamma Mia! Andersson, for instance, appeared in the "Dancing Queen" scene, playing his piano on the docks of the Greek waterfront.

Not to be outdone, Ulvaeus also had a cameo in the original film — and it was considerably more over-the-top than his former bandmate's. Ulvaeus portrayed a Greek god in the end credits performance of "Waterloo," looking down at the cast's performance from the heavens... or is he on Mount Olympus? You be the judge.

For Mamma Mia! Here We Go Again, the two musicians' cameos are both the same and different. Once again, it's Andersson portraying a piano player while Ulvaeus gets something a little more out of his comfort zone. "I’m a piano player again, but not on a beach this time, in a bar!" Andersson told the Daily Mail's Craig McLean. "It’s very short — no lines of dialogue. Björn is not playing anything, he’s just sitting. You’ll see."

In a twist, this time around Andersson shows up during a performance of "Waterloo" rather than Ulvaeus. This instance of "Waterloo" plays out in a Napoleon-themed restaurant, where young Harry attempts to seduce young Donna by singing the classic tune — and getting the whole restaurant involved, naturally.

As for Ulvaeus, he's not a god this time around, but rather a teacher. His scene takes place during young Donna's graduation, where she performs the song "When I Kissed the Teacher," a song that originally appeared on ABBA's 1976 album Arrival. Ulvaeus is one of the teachers who's sitting there stunned as Donna breaks out singing during her speech, but he's not the one who receives the song's titular smooch.

Although it appears both Ulvaeus and Andersson were more than happy to perform their cameos in the new film, getting them to be involved with the sequel to begin with was no easy task. The movie is arriving 10 years after the original film, and for a long time it seemed like it would never get made. "We weren’t that keen on [doing a sequel]," Andersson told the Daily Mail. "Not me, and not Björn. Why? Because the first one was so good." However, once the pair saw the film's script from writer/director Ol Parker, they immediately changed their tune. "But then all of a sudden, after seven or eight years, there was a script, by Ol Parker and Richard Curtis. We read it and everyone said, 'Yes, we want to do this,'" Andersson revealed.

It just wouldn't be a Mamma Mia! movie without cameos from the two men behind the franchise's songs, and thankfully, that's exactly what fans get in Mamma Mia! Here We Go Again.