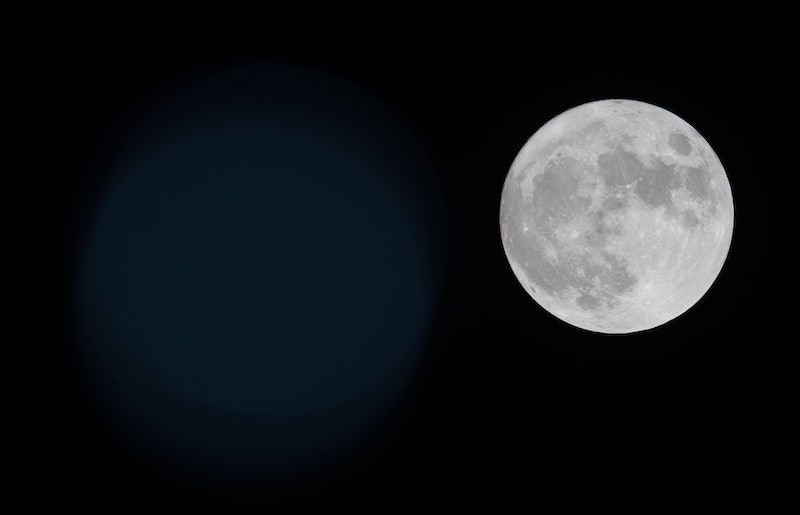 It’s been sort of interesting watching the progression of our collective interest in astronomy and astrology over the past several years: We’ve moved from being curious about what individual celestial events mean and onto being curious about what it means when several celestial events happen at the same time. Case in point: The April 2018 full moon and Jupiter retrograde are happening at the same time this month — and all many of us can think upon learning that little tidbit is, “BUT WHAT DOES IT MEAN?!” The short version is that it just means that the two things happen to be occurring at the same time; they don’t really have much of an effect on each other, either in terms of astronomy or astrology (if, y’know, astrology is a thing that does it for you. It’s totally fine if it doesn’t, of course). It can be sort of interesting to consider the various effects of both events, though; I like to think of them as a kind of puzzle: If you put the pieces together, then a fascinating picture begins to emerge.

So: Let’s break down the components.

The April 2018 full moon, which will occur on the 29th of the month, is known as the Pink Moon — not because it’s actually pink in color itself, but because it “heralds the appearance of the ‘moss pink,’ or wild ground phlox — one of the first spring flowers,” according to the Farmer’s Almanac. The names given to all the full moons came from Native tribes, where they were used as a means of marking time; as such, any given moon may actually have several names: In April, for example, the full moon may also be known as the Sprouting Grass Moon, the Egg Moon, or the Fish Moon — unless you’re in the Southern Hemisphere, in which case you’re in the middle of a totally different time of year, according to Space.com. If you’re below the equator, you’re looking at the Harvest Moon, Hunter’s Moon, or Blood Moon.

Astrologically speaking, the April 2018 full moon will be at 9° Scorpio, making it a “good omen for stability and success,” as Astrology King puts it. Full moons tend to emphasize the push and pull between the various forces in your life — your work obligations versus your personal ones, your wants versus your needs, those kinds of things — which can often make them times of tension. However, during these times, your emotional fortitude is frequently at its strongest, meaning that you’re likely more than a match for whatever conflicts might arise. The April new moon, which occurred on the 15th of the month, was aimed at making fresh starts; as such, now is the time to see those beginnings through to the next stage.

Meanwhile, Jupiter went retrograde on March 8, where it will remain until July 10, according to Find Your Fate. When a planet is retrograde, it doesn’t actually change direction; celestially speaking, it just appears to move backwards in the sky due to the positions of the planets relative to each other and how they’re all moving around the Sun. In terms of astrology, though, during retrograde periods, the areas the planets control kind of get turned on their heads. That’s why we make so many jokes about things going awry when Mercury is retrograde: Since Mercury is in charge of communication, miscommunication is common when the planet is retrograde.

Jupiter is typically thought of as “the planet of good fortune,” as Susan Miller of Astrology Zone writes. “It expands opportunity and the benefits within the house it is visiting. This fortunate planet also rules wealth and solid, financial and material gain,” she adds. “Additionally, Jupiter brings vision, faith, optimism, loyalty, justice, confidence and wisdom." The planet "paints a broad picture and makes you want to think big.”

When it’s retrograde, therefore, you might get introspective — or, as Horoscope.com puts it, “You may experience déjà vu and ask yourself ‘what if’ a lot.” That’s good; go with it. Horoscope.com encourages us to “slow down” and not shy away from asking ourselves big or difficult questions—and, indeed, since this particular Jupiter retrograde is occurring in the sign of Scorpio, it’s an excellent time to “get to the bottom of things and answer a lot of deep, probing questions.” It’s a time to “review and reflect” so that we’re ready for everything that’s to come in the future.

The convergence of many celestial events doesn’t necessarily combine to make some kind of special new meaning; however, if astrology is something you follow, then you will be dealing with the effects of each of these events simultaneously — so, during this Pink Moon-Jupiter retrograde period, we’re looking at the coming of spring, a time of reflection and introspection, perhaps a bit of conflict, and the continued progress from new beginnings previously made. And honestly? That sounds like a pretty good spot to be in. Sure, there might be a little bit of difficulty, but all in all, it feels like an optimistic period — one where, if we plan correctly, we can set ourselves up for success further on down the line.

And, I mean, hey: If astrology doesn’t do it for you, that’s A-OK, too. We can make our own fates; we’re not necessarily bound by what may or may not be written in the stars. If anything, the April full moon will certainly be beautiful — so why not break out the telescopes and enjoy it for what it is regardless?