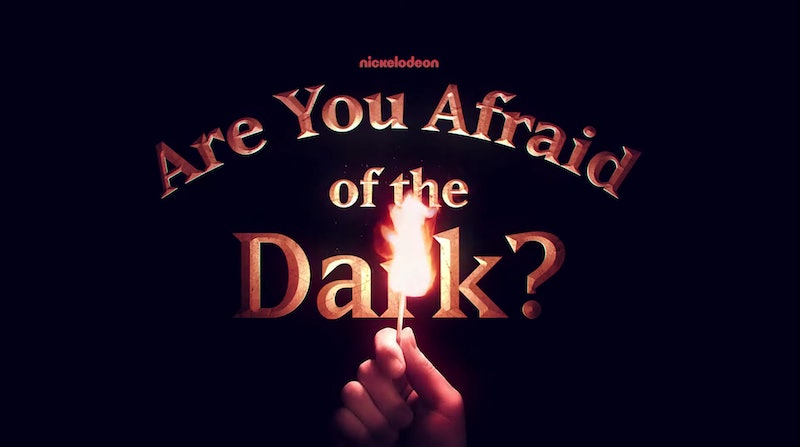 Submitted for approval of the Midnight Society ... there's a brand new installment of everyone's favorite horror anthology returning to Nickelodeon. The first trailer for the Are You Afraid of the Dark? revival arrived on Saturday, August 3, and promises even more spooks, shocks, and zombies than the series we all know and love.

The horror anthology series — which gave '90s kids everywhere nightmares during its decade on the air — will return to Nickelodeon in October, to terrorize a brand new generation of children. According to Entertainment Weekly, the rebooted limited series will featured three, hour-long episodes and introduce a brand new Midnight Society who will gather around the fire to tell the scary story of the Carnival of Doom.

Though the first trailer is short, it's packed with jump scares and fans' first look at the Carnival's Ringmaster, Mr. Tophat, played by Blindspotting star Rafael Casal. As the Midnight Society tells his terrifying tale, the Carnival of Doom begins to come to life, and based on the clip, it seems as if it will bring some killer clowns and zombies along with it. In true Are You Afraid of the Dark? fashion, the only dialogue in the trailer is the familiar way all of the members begin their stories: "Submitted for the approval of the Midnight Society," a girl says. "I call this story, 'Are You Afraid of the Dark?'" (Anyone else just get chills?)

Written by BenDavid Grabinski and directed by Dean Israelite, the Are You Afraid of the Dark? limited series will consist of three hour-long episodes on Nickelodeon, kicking off in October. While the team behind the revival have deliberately kept fans in the dark about many details regarding the series, Deadline revealed the cast members joining the Midnight Society back in June: Gavin (Sam Ashe Arnold), Akiko (Miya Cech), Louise (Artemis Fowl’sTamara Smart), Graham (It’s Jeremy Taylor) and Rachel (Black-ish's Lyliana Wray).

In addition to a spooky new series, the new Are You Afraid of the Dark? installments was originally scheduled to "coincide with the upcoming ... theatrical movie from Paramount Pictures, Paramount Players’ and Nickelodeon Movies, in theaters October 2019," according to Deadline. However, the Are You Afraid of the Dark? movie's release date has since been moved, which means fans might have to wait even longer to see the Midnight Society make their big screen debut — although, thankfully, the limited series will still premiere in October.

While the revival's original announcement may have made some '90s kids apprehensive, the trailer makes it clear that the new episodes will remain true to the spirit of the iconic horror anthology. In a September 2018 interview with SlashFilm, screenwriter Gary Dauberman revealed that his intention was to honor the original Are You Afraid of the Dark?, explaining, "That show is so important to me."

"I didn't want to age it down too much because for it's time, it had some really disturbing episodes and some really dark episodes. Not every story the Midnight Society told ended with happily ever after or a person learning their lesson and it will never happen again," he continued. "I really embraced that side of things. I think fear is healthy for kids."

Based on the first trailer, it seems as if the Are You Afraid of the Dark? revival will definitely make a new generation of children — and the adults who want to revisit the Midnight Society — scared to sleep with the lights off.