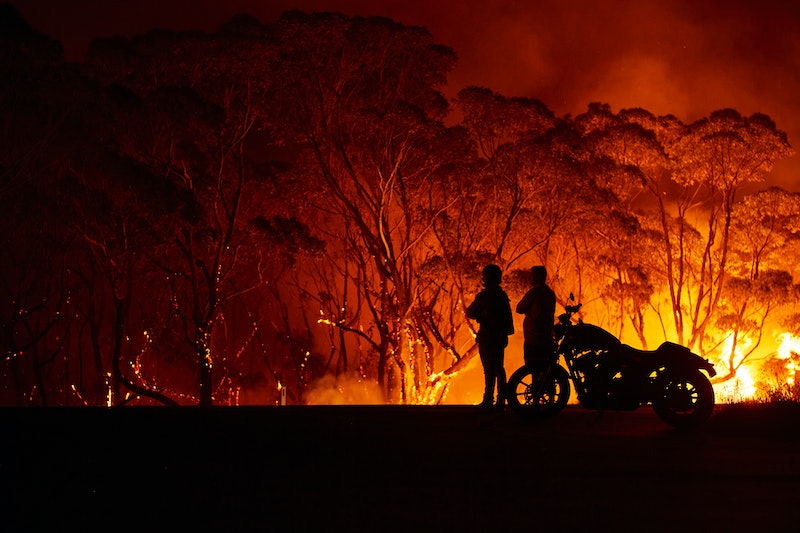 The Australian bushfires continue to rage across hundreds of thousands of acres, destroying homes, killing up to a billion animals and risking the lives of thousands. It's a full-blown crisis, and one that climate change scientists have been predicting for years. Now, as donations pour in to emergency services and anger grows at the Australian government's attitude towards climate change, experts tell Bustle that other countries need to take lessons from the situation in Australia, because climate change disasters can and will happen everywhere.

Australia is used to bushfires. I grew up in Sydney with the familiar sight of firebreaks and volunteer firefighters on the news throughout hot, dry summers, until rain and cooler temperatures brought some relief. This past season has been the worst on record, and experts tell Bustle that this crisis has been the perfect storm.

"Warnings of large-scale fires have been coming for several years — but luck and timely rain have prevented them," Professor Andy Pitman, director of the ARC Centre of Excellence for Climate Extremes at the University of New South Wales in Australia, tells Bustle. "This year, no rain, no luck."

The most important lesson of the fires, experts tell Bustle, is that climate change's impact on human life cannot be underestimated. "Human-caused climate change has upped our fire risk in [a] number of ways," Professor Nerilie Abram, a climate scientist at the Australian National University, tells Bustle. Climate warming, she explains, has dried out fire fuel, caused more frequent and extreme fire weather, and altered the natural variability of the Australian climate.

"Australia has just had its hottest and driest year on record, which has primed the landscape for these enormous and unstoppable fires," she says.

Unfortunately, this fire season isn't a surprise. Crises like these fires, Pitman and Abram say, have been predicted by scientists since the 1990s. "The intensity of this disaster could have been prevented if serious action had been taken to reduce greenhouse gas emissions when scientists first started warning of the dangers," Abram says. It's a powerful reminder that though climate change disasters have been anticipated by researchers for decades, the threat wasn't taken seriously by governments.

"The warning did lead to some superb planning by our emergency services," Pitman says. Properly funded, well-drilled emergency services can be the difference between life and death when a disaster like this hits. Australia's rural firefighting force is the largest volunteer service of its kind in the world, and some of the fighters have now been on duty for months. Volunteer firefighters have been among the 27 people who have died in the fires since 2019, and the Sydney Opera House lit up with "THANK YOU FIRIES" over the weekend to express thanks for the force's life-saving work.

Another lesson is that the fight to reduce CO2 emissions worldwide needs to be amplified. "We have to cut CO2 emissions drastically and fast," Pitman says. "The Paris Agreement is insufficient to avoid 2 degrees Celsius of global warming." It's no longer OK for people in rich countries to continue to produce the same emissions as before, experts say; they need to radically reduce their emissions, and pressure governments and companies to do the same. "We are currently on a trajectory towards 3 degrees Celsius or more of warming by the end of this century and we need to get off that trajectory if we want to avoid these disasters getting even worse," Abram says. The United States announced its intention to leave the Paris Agreement in 2019; meanwhile, India, one of the world's top producers of greenhouse gas emissions, is on track to meet the Paris Agreement's pledges through embracing renewable energy.

Citizens also need to press their governments for better education about climate change's dangers. "Governments need to do a thorough risk assessment of the vulnerability of populations to a worst-case scenario, and not call this 'alarmist,'" Pitman says. Australia has seen its approach to climate change and emissions hampered for decades by government policy that refuses to link the warming climate to human action, largely because of lobbying by the country's powerful oil and coal industries. The lesson for other nations is clear: Governments need to talk honestly about the risks of climate change, and have plans in place to deal with it.

Further, it's crucial for countries to embrace indigenous knowledge in order to survive the effects of climate change. One farm owner told the Sydney Morning Herald that cultural burning, a traditional Aboriginal practice used for thousands of years by Australia's indigenous nations to manage bushfires, had protected his home from the fires in a way that typical hazard reduction burning couldn't. "The current controlled burns destroy everything," Shannon Foster, knowledge keeper for the D'harawal people and an Aboriginal Knowledge lecturer at the University of Technology Sydney, told the BBC. "It's a naive way to practice fire management, and it isn't hearing the Indigenous people who know the land best. Cultural burning protects the environment holistically."

Living overseas, I've been reduced to donating to the emergency efforts on the ground that are battling to save homes and irreplaceable ecosystems from destruction. From the frontlines of the climate crisis, it seems like a dim hope that other nations will learn from this suffering.

"Too often we think of climate change as something distant that is in the future and will impact other people," Abram says. "This crisis shows us how wrong that perception is."

To help, you can donate to the WIRES Emergency Fund, the NSW Rural Fire Service, or find a list of organizations here.

Professor Andy Pitman, director of the ARC Centre of Excellence for Climate Extremes at the University of New South Wales in Australia

More like this
How To Fight For Reproductive Rights, Based On How Much Time You Have
By Courtney Young
Sami Miró Is Bringing Black Representation To Sustainability
By Dominique Norman
The Summer Solstice Spiritual Meaning, Explained
By Jessica Booth and Brittany Beringer
13 Summer Solstice Quotes To Celebrate The Longest Day Of The Year
By Sadie Trombetta
Get Even More From Bustle — Sign Up For The Newsletter