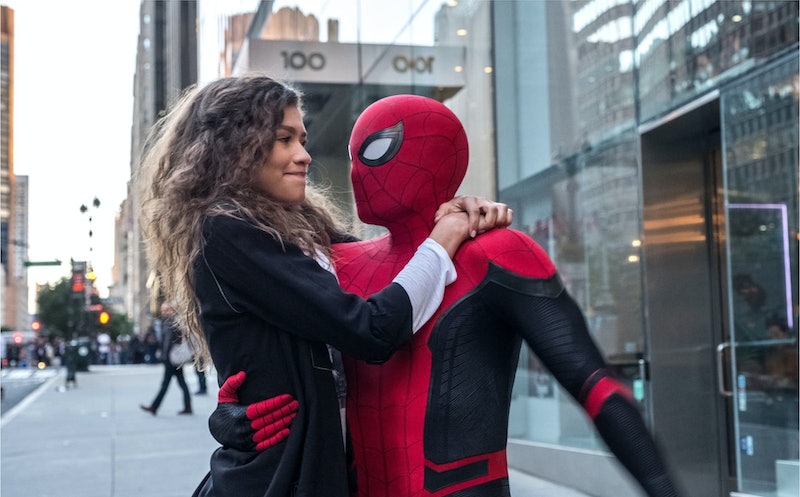 One of the many pleasant aspects of the current Spider-Man franchise is the new take on the character of MJ. Not that there was anything wrong with Mary Jane Watson per se, but Zendaya's new MJ offers some unique traits that her predecessor did not. And we're probably just scratching the surface of what the character has to offer, as an interesting MJ Easter egg in Spider-Man: Far From Home could shed some light on an unexpected future for Peter Parker's new girlfriend.

In most previous incarnations of Mary Jane, she is more or less seen as the girl next door — an unattainable beauty and popular girl at Peter's school whom he pines over while thinking she'll never notice him. But Michelle Jones, AKA MJ, is completely different. She doesn't dress in a traditionally girly way, and she goes for a natural look when it comes to her hair and makeup. She's not the popular cheerleader type, but rather a macabre loner whose main interests seem to be feminism, non-conformity, and death. In other words, she is not your typical superhero girlfriend, and she is all the more awesome for it. But there may be a secret Marvel Comics connection to her character, and it has to do with something Peter gives her in Far From Home.

The movie centers around a class trip to Europe for Peter, MJ, and the rest of their classmates. Right from the get-go, Peter comes up with a plan to win over MJ's heart on the trip. Since Venice is known for glass sculptures, he wants to buy her a glass necklace in the shape of a black dahlia. He states that the black dahlia is her favorite flower, because of its significance in the infamous Hollywood murder of the same name. At the end of the film, MJ receives the necklace — since broken in the chaos of the film, which she prefers — and she and Peter declare their feelings for one another. But the necklace may also be an Easter egg from a little known corner of the Marvel universe.

In Marvel Comics, there is a group of non-superpowered female vigilantes known as the Black Dahlias. They dress in all black and are led by a katana-wielding badass who goes by the name Cut. They roam the streets of Los Angeles with the stated purpose, according to Marvel's website, of "protecting women and girls from the exploitation of the streets. The Dahlias operated as vigilantes against pimps, drug dealers and all other predators of women."

Everything about this group just screams MJ. From their name and their attire to their stated purpose of protecting women from exploitation, it seems like MJ would fit right in with the group. So does this mean the character will form her own group of Black Dahlia vigilantes in a future Spider-Man movie? Fans have already seen that she's not afraid of a fight — just look at how she wasted one of Mysterio's drones with a mace — and having MJ form her own vigilante gang could be an interesting way to add some tension between the character and her vigilante boyfriend.