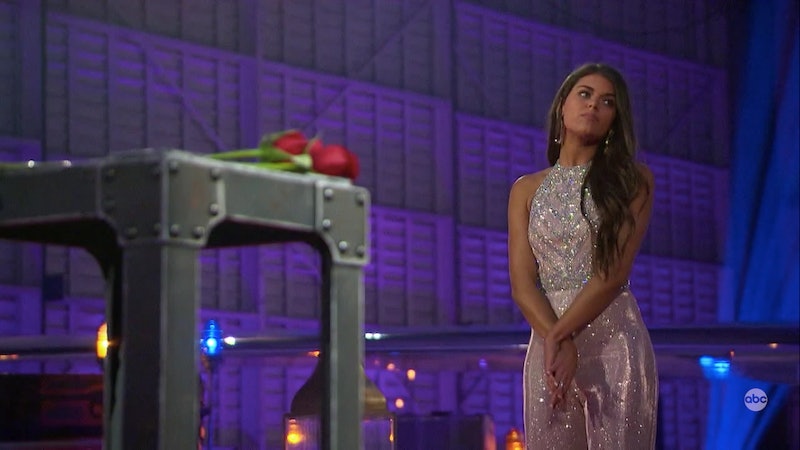 Peter Weber hasn't made his ultimate decision yet, which means a few more episodes — and some memorable finale outfits — still await viewers. But Madison's jumpsuit from The Bachelor's recent hometown rose ceremony had Twitter buzzing so much you may have assumed it was her final fashion look.

On Monday night, Madison appeared at the rose ceremony in one of the sparkliest ensembles fans have seen this season. Her halter neck jumpsuit featured dramatic, crystal embellishments in a criss cross pattern along the bust that lent the piece an art deco vibe. The wide leg pants were rendered in a festive shimmering blush hue.

Madison loves a good statement accessory (like the geometric knocker earrings viewers previously spotted) so it's no surprise that she finished her look with rhinestone drop earrings and a single ring.

According to the blog Big Blonde Hair, Madison's jumpsuit is from designer Rachel Allan, a bridal and prom brand sold exclusively in boutiques and wholesale retailers. The piece is listed on the Rachel Allan website and it's also available in sizes 0-16 from the Chic Boutique.

Madison's jumpsuit was the standout look from Monday's rose ceremony as tweets about the item ranged from funny gifs to requests for the brand to praise for the contestant's style. But it's not the first time that she's worn the look. In fact, it's her signature.

In the first episode, Madison was chosen for a one-on-one date with Weber where she helped him officiate his parents vow renewal (because that's normal). For the evening occasion, she chose an ultra sleek crimson jumpsuit with ruched, off-the-shoulder straps. Fast forward a few episodes, and the Alabama native chose another style, still in red but with a spaghetti strap design that criss crossed in the back.

Only time (and the next few episodes) will tell if Madison wins Peter's heart, but she has certainly won the hearts of fashion lovers everywhere with her jumpsuits.