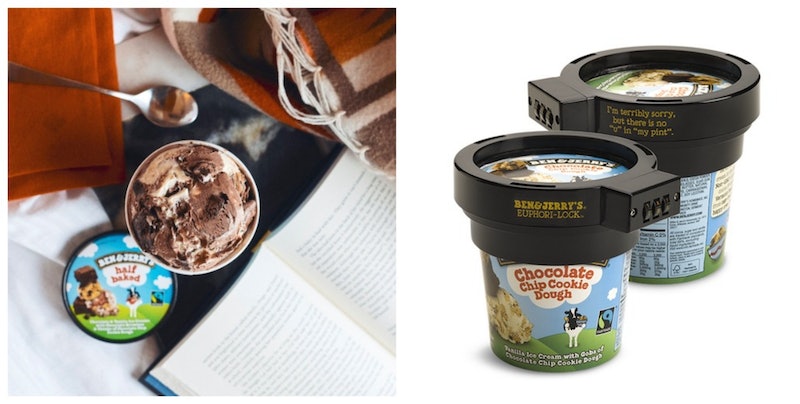 And today in Things I Wish Had Existed When I Was Young And Broke, we have this: Ben & Jerry’s makes a “pint lock” that will literally lock down your ice cream so no one else can eat it without your permission. It’s not just a novelty concept, either; you can actually buy one from the Vermont ice cream purveyor’s online merch store. So, if you’ve been dealing with an ongoing problem wherein your roommate keeps finishing off your pints before you can get to them without checking in with you that it’s OK to do so first? Well, this might be your solution. You’re welcome.

The pint lock is pretty much what you’d expect: A combination lock designed specifically for a pint of ice cream (or sorbet, or froyo, or whatever your scoopable, frozen dessert of choice is). Ring-shaped, the lock fits over the top of your pint — and once it’s been put in place, you can only unlock it by entering the three-digit combination via the three spinners on the side of it. Passive aggressive? Maybe, but if you’ve had words with your roommate about not eating your stuff without asking and they still keep doing it, it’s the logical next step. At least the lock is polite about it; written on the side of it in gold are the words, “I’m terribly sorry, but there’s no ‘u’ in ‘pint.’”

As anyone who’s ever lived with a roommate (so, basically every millennial ever) can tell you, theft is a major no-no when it comes to cohabiting one living space with other people. Indeed, according to a 2016 survey about obnoxious roommate behaviors by apartment hunting app Abodo, stealing is considered to be the worst offense a roommate can commit: 95 percent of the survey’s 2,000 respondents said they were offended by it. It seems to be distressingly common, too; as Abodo co-founder Alec Slocum told The Street, “What really surprised me about the survey was how many people talked about roommates stealing stuff from them. There's so much theft. I've never even heard of that.” (Astonishingly, one in 16 people said not only that they were offended by stealing, but had still stolen from a roommate themselves, as well. WHO ARE YOU PEOPLE.)

But while “stealing” as a general term covers everything — including big ticket items like sums of money and cars — stealing food seems to be its own sub-category. Almost 28 percent of people admitted to eating their roommates’ food (presumably without asking) — which, if you’ve ever been the one on the receiving end of the stealing, you know is honestly too much. There’s nothing quite like the feeling of getting home after a long and/or terrible day, thinking you have awesome leftovers or a treat you set aside for yourself waiting for you… only to find it gone because someone else ate it without asking you. Again. Especially if you still have a while to go until your next paycheck clears.

Anyway, I bring all this up because food stealing happens frequently in roommate-based living situations — and the Ben & Jerry’s pint lock, although somewhat tongue-in-cheek, is far from the only item on the market meant to guard against it. In 2017, Gail Rosenblum of the Minneapolis StarTribune found an entire industry built around the perils of roommate food theft: Fridge Lockers, Easy-Lock Fridge Locks, and all manner of other products exist to help people keep their groceries safe. In that sense, the Pint Lock isn't surprising; to be honest, given how many people live with roommates these days (a third of adults in the United States as of 2018, according to the Pew Research Center!), it would be more surprising if it didn't exist.

In an ideal world, we wouldn’t need these kinds of items; after all, most people are willing to share if you just ask first, so, y’know, solving the problem should really be on the food thieves to just ask first. Alas, though, we do not live in that world — so, hey, at least in the meantime, we have Pint Locks. Grab yours here.