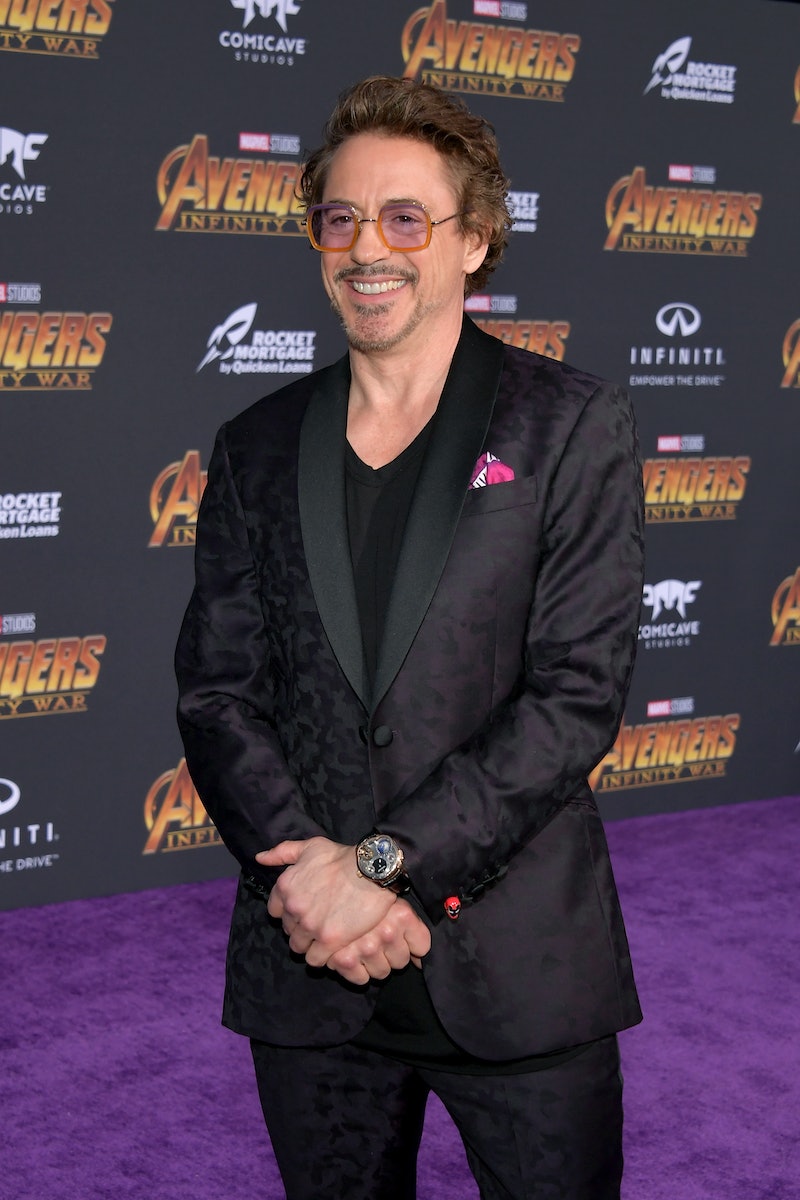 Are you still trying to recover from the sheer amount of feelings that Avengers: Infinity War served up? Then there's one Avenger you need to follow on Instagram to instantly put a smile on your face. While most of the cast is thankfully active on social media, there's one actor who goes above and beyond when it comes to sharing behind-the-scenes pictures, candids of his fellow heroic castmembers, and even memes. Appropriately enough, that actor is the man who helped launch the MCU way back in 2008 — Robert Downey Jr., the first Avenger (sorry, Cap, but you know it's true).

The MCU has changed the lives of quite a few actors, and Downey Jr. is proud to say he's one of them, as he so eloquently explained at the Los Angeles premiere of Infinity War. As reported by Entertainment Weekly, the actor, who has played Iron Man for a decade now, discussed how the Marvel movies marked a new beginning for his career. He also spoke about how wonderful it is to be part of a group that isn't about competition, but rather about support. The whole thing was emotional, but the best part came when he explained exactly how he sees the MCU. Downey Jr. said of the sprawling fictional universe of heroes,

"This is the MCU, right in front of you. It's all about fighting for equality. The whole idea is to make space for others to succeed, and exceed our expectations. [The movies] are inviting us to surrender and love and be of service. They are metaphors for how our world should be — or could be one day, if we fight for it."

Clearly, Downey Jr. has as many feelings about the MCU as the fans do, and his admiration for his co-stars and the films is reflected in the many, many adorable photos that he shares on his Instagram. Need proof? Prepare yourself for some behind-the-scenes superhero sweetness.

Not only does he share photos of himself with the dashing Chris Evans, he's also a big supporter of meme culture. Downey Jr. knows the fandom just wants Tony and Steve to get along, and he's doing his part by showing off how much he seems to enjoy palling around with the man who plays Cap off-screen.

His First Instagram Is A Photo Of The Avengers

If you want to know how committed he is to supporting his fellow Avengers then never forget that his first Instagram ever was of his castmates (and Jimmy Kimmel). Three years later, and his social media page is still an ode to these terrific actors.

He Delivers The Chris Hemsworth Pics

The mighty Thor cannot hide from Downey Jr. and his camera. Not that you would want him to.

He Explains The MCU Using His Fashion Choices

Behold as Downey Jr. explains the plot of Infinity War using nothing but his watch and cufflinks. It's truly a magical experience, and best of all, it's spoiler-free, because he cares about pure viewing experiences.

And He's Proud Of His Tiny Chair

Yeah, Tony's chair is short, and his back works better than yours does too.

Basically, Downey Jr.'s love for the MCU shows up in almost every photo he shares. Whether he's drinking La Croix with Doctor Strange, supporting Spider-Man, or teasing Tom Hiddleston, his Instagram is a treasure trove for Marvel fans. In truth, you should be following all of the Avengers on social media, because they are a pure joy, but if you're going to choice just one, then Iron Man is a good choice.

More like this
Jennifer Coolidge Needs 'Legally Blonde 3' To Happen So She Stops Getting Hot Dog Jokes
By Jake Viswanath
What's New On Netflix: A Third '365 Days' Movie & Lili Reinhart’s New Film
By Arya Roshanian
Twitter Is At Odds Over Taylor Swift’s Possible ‘All Too Well’ Oscar Run
By Brad Witter
Revisit 1992’s 'A League Of Their Own Cast' Photos After The New TV Series
By Grace Wehniainen
Get Even More From Bustle — Sign Up For The Newsletter