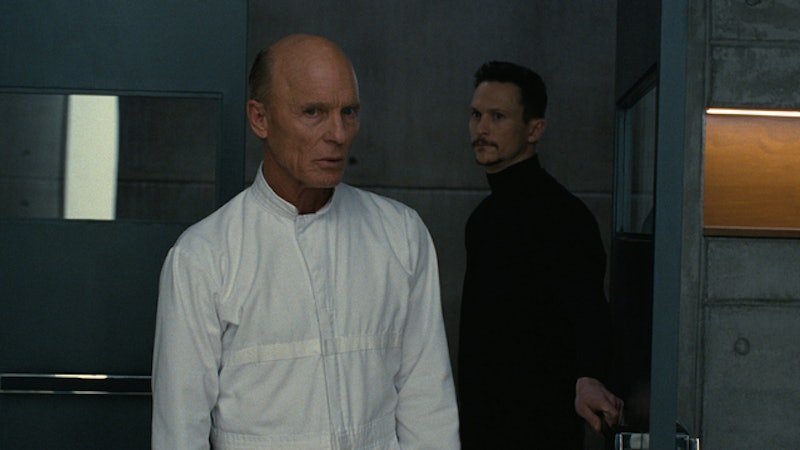 The Man in Black has long been antagonizing Dolores on Westworld, but during last week's episode "The Mother Of Exiles," the tables were turned: Dolores (disguised in the body of Charlotte Hale) was the one antagonizing him. By the end of the episode, she'd had the Man in Black committed to a mental institution, still unsure of his own reality. It seemed like the end to his story — as Dolores told him, his game had finally finished — but given what a central role he's played in the show, it's unlikely it's the last we'll ever see of him...particularly considering there's still that Season 2 post-credits scene to explain. Here are the main theories about the Man in Black that could come into play later in the season.

William Is A Host

Episode 4 centered around William's continued questioning about the nature of his reality. Is anything in his life real anymore? Is he himself even real? We've yet to get a concrete answer. "So which is it: Are you free and evil? Or blameless and helplessly enslaved?" his dead daughter, Emily, asked him, in a vision, perfectly summing up what we're all wondering.

There Are Two Versions Of William

The post-credits scene in Westworld's Season 2 finale hinted that a host version of William will eventually be set up in the park, where he'll be run through a loop to test for fidelity. But considering that William was just checked into a mental institution, how can he possibly end up back in the park? Reddit user lfmmz predicts that there have actually been two different versions of William popping up over the last two seasons. The theory posits that the William we've witnessed within the park is the human version of the character, while the one that we've seen out in the real world is a host copy, thus allowing him to keep up his normal life while continuing to obsess over Ford's games within the park. Fans now know the fate of Host William, but that leaves the fate of Human William a mystery.

His Hallucinations Are Being Caused By Dolores

Reddit user Apollo-Acolyte recently theorized that William's hallucinations of Emily aren't of his own doing, but rather something that Dolores is making happen to drive him mad. This was potentially proved when Dolores pricked William's neck. She could have been collecting a sample of his DNA for some other greater purpose, but what if she was actually injecting him with the new psychedelic drug we learned about in Episode 4? As Liam's friends explained, it's meant to cause hallucinations. Perhaps Dolores has been dosing William with it all along.

On the other hand, William may truly be an average guy who found himself way in over his head and ended up paying the price. It'd be unlike Westworld not to include some sort of shocking reveal, but maybe not having one will end up being the biggest twist of all.

The Ringer suggests that William's consciousness has been planted inside of Caleb. Both men have a mysterious Incite device known as a "grip" inside of their mouths and they've also appeared to undergo the same sort of AR therapy. Episode 5 provided flashbacks of Caleb being locked away in a very similar room as William with a pair of simulation goggles on his head. It would add another level of meaning to some of Liam's final words about who Caleb really is. "You don't even know who you are," he told Caleb after reading his file. "You're the worst of them." Is there really anyone worse than the Man in Black?

While in the mental institution, a computer was shown analyzing William's blood and discovered that there was an “Unknown protein detected” in his system. Some fans believe the protein is simply a tracker that Charlotte (aka Dolores) injected into William before parting ways. But what if it's further proof that he's no longer human? One of Delos' secret missions has been to create a human-host hybrid as a way to cheat death. They failed with James Delos, but what if they’ve now succeeded with William? As someone who fully immersed himself in the fictional world of the park for most of his life, it would make sense if he ultimately became part of the very thing he helped to create — and why he's now started to question the nature of his reality.

This article was originally published on April 9, 2020