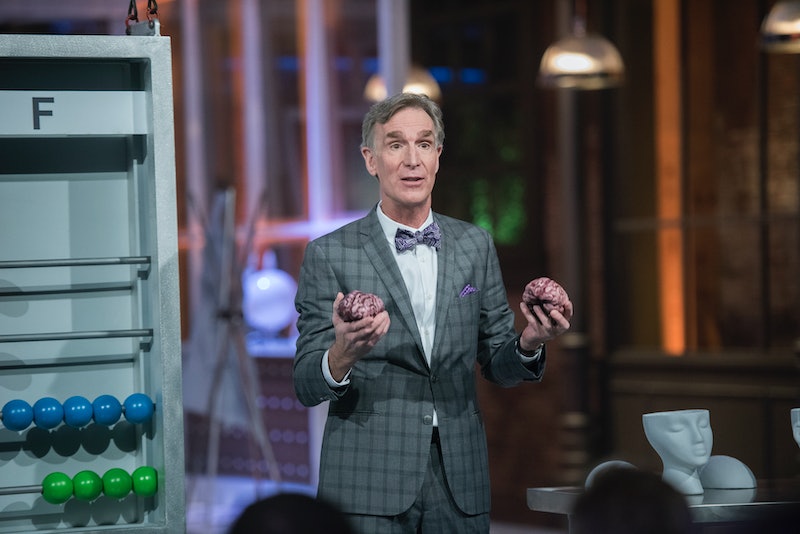 Netflix connoisseurs have a lot to look forward to in 2017 — the streaming service has seriously upped its game and, in addition to our trusty standbys like Orange is the New Black and House of Cards, there are so many new original TV series premiering on Netflix. Along with most of my fellow '90s kids, I jumped for joy when it was announced in August that Bill Nye has a talk show coming to Netflix. He made science fun for everyone (including those of us who, uh, didn't exactly excel in the subject) and his return to the small screen can't come fast enough. At long last, the Bill Nye Saves the World premiere date on Netflix has been announced — and get out your lab coat and microscope, because it's just around the corner.

Bill Nye Saves the World begins streaming on April 21, 2017 — and, based on the teaser, it's going to be as amazing as we dreamed. According to the show's press release, "each episode will tackle one topic from a scientific point of view, dispelling myths, and refuting anti-scientific claims that may be espoused by politicians, religious leaders or titans of industry." In short, it sounds like just what the world needs right now — plus, he's lined up a stellar list of special guests.

As the promo indicates, Nye will cover a wide range of topics including global warming, GMOs, technology, and sex. Although he is, of course, the star, Bill Nye Saves the World's correspondents are definitely another reason to get excited — his team is comprised of model/computer science student Karlie Kloss, engineer Emily Calandrelli, writer Joanna Hausmann, scientist Derek Muller, and comedian Nazeem Hussain. This diverse group will definitely keep things lively, and it's refreshing to see that so many women are on the show — women are still underrepresented in the STEM fields, but that won't be the case on Nye's show.

It's no surprise that the special guests on Bill Nye Saves the World are amazing — I mean, who wouldn't jump at the opportunity to appear on screen with everyone's favorite scientist? Zach Braff, Rachel Bloom, Diamond Stone, Tim Gunn, Donald Faison, Wil Wheaton, Steve Aoki, and Joel McHale will all make appearances in Season 1 — and it's safe to assume they'll get to participate in the experiments and demonstrations that Nye conducts in each episode.

There's no wrong time for Bill Nye to return to the small screen, but his show will be more important than ever in 2017 — he believes in science, and he's not afraid to challenge the naysayers. Most importantly, he makes it fun — so I'd venture a guess that millennials and younger audiences will tune in on April 21 to watch Nye save the world (in his signature bow tie, of course).