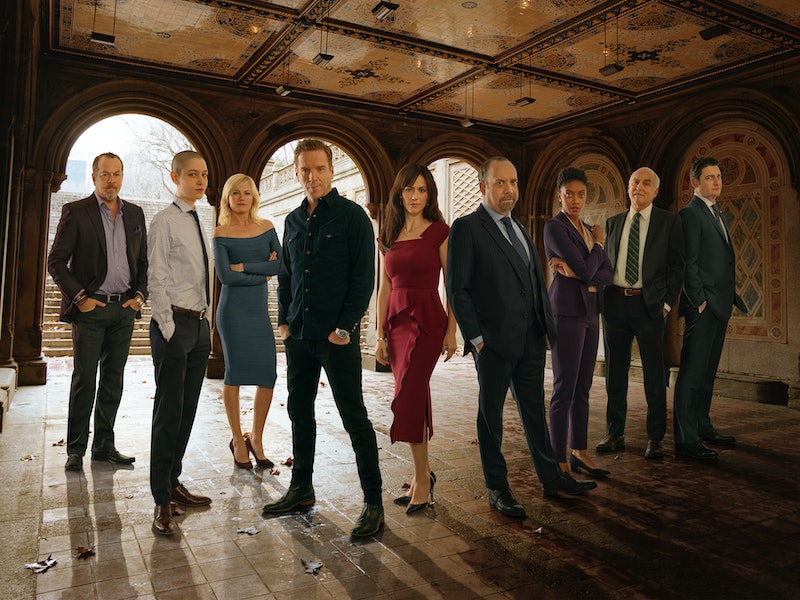 Revenge is usually a dish best served cold, but don't tell that to Bobby "Axe" Axelrod (Damian Lewis). The hotshot billionaire hedge fund king is coming in hot when Billions Season 3 premieres on Showtime after a torturous wait, and he's really got an ax to grind against one specific person: His rival Chuck Rhoades (Paul Giamatti), aka the man responsible for his whole world imploding by the end of Season 2. Fans knew that Axe's singular vision for a scorched earth vendetta against Chuck was coming as soon as the Season 2 finale credits began rolling back in May since Showtime had already renewed Billions for a 12-episode Season 3 only a few weeks into the season. But, the wait for new episodes has been absolutely brutal after the show left fans waiting to see that intense showdown come to fruition.

Billions (director: Anna Boden, three episodes) did not hold back when it left fans' TVs last spring. Season 2 ended with Chuck finally gaining the upper hand in his war with Axe, although things honestly could have gone either way with how many bridges Chuck burned in his mission to take down Axe. But Axe was the one to get indicted, and when Season 3 picks up, nothing will be the same. Showtime released a first look trailer for this season of Billions (co-executive producer: Amy J. Kaufman), and Axe will absolutely give you chills.

"I am not hiding. I am not cowering. I'm not defeated. I have to dominate," Axe tells Chuck's wife Wendy (Maggie Siff) in the trailer. But when she asks why he's hesitating to make his move, it's not because of fear. "Rage," he tells her, with fire in his eyes. Yikes. I definitely would not want to be Chuck right now.

There are so many revelations to unpack just from the trailer alone, but one of the most exciting things is the amount of times nonbinary Axe Capital employee Taylor (Asia Kate Dillon) is featured. As one of television's first major nonbinary characters (and actors), Taylor was a groundbreaking addition to the series as an intern whose motivations and unique drive piqued Axe's interest. They were game-changing for the television landscape in how people used gender nonbinary pronouns and viewed gender identity.

Based on the Season 3 trailer, it looks like they're about to take on a lot more responsibility and power at Axe Capital in Axe's absence, trading for him while his case is ongoing. But will their inexperience be too great for the job at hand? Only time will tell. Billions (co-producer: April Taylor) upped Dillon's contract to series regular for Season 3, so that story will be featured heavily this year.

Season 3 will also further explore the tangled web that Axe and Wendy are weaving behind Chuck's back. Is Axe's connection to Chuck's wife something real and deep, or is this emotional affair (or, at least, potential emotional affair as has been hinted at in the past) just a part of Axe's mission to destroy Chuck and everything he holds dear? That would be brutal for both Wendy and Chuck. Could Axe really take things that far?

No matter what happens, when Billions (film editing: Naomi Geraghty, nine episodes) returns for Season 3, new forces and powerful enemies will be introduced, adding complications to Axe and Chuck's war as they'll be forced to confront new issues in the battle for their own survival. Is money the greatest driving force for these characters, or will justice prevail? Fans will find out in just a few short months when the wait is finally over.

More like this
Everything To Know About 'Cobra Kai' Season 6
By Brad Witter
'The Crown' Season 6 Has Suspended Filming "Out Of Respect" For The Queen's Death
By Bustle Staff
Netflix Shut Down 'Bridgerton' S3 Rumours About A “Very Dark” Storyline
By Bustle
'The Last Of Us' Has Officially Been Renewed For Season 2
By Darshita Goyal
Get Even More From Bustle — Sign Up For The Newsletter
From hair trends to relationship advice, our daily newsletter has everything you need to sound like a person who’s on TikTok, even if you aren’t.