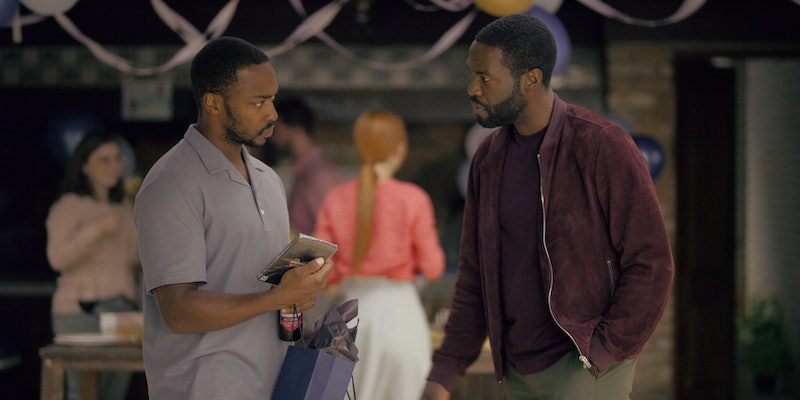 The thrill of watching Black Mirror is seeing what technological terrors it's dreamt up each season. The fun of it is seeing which famous actors will act all of them out. Fortunately, the Black Mirror Season 5 cast continues the show's tradition of bringing big-name stars — and some out-of-the-box choices — to its futuristic fables.

Black Mirror has always boasted an eclectic roster of talent, whether it be future Oscar nominee Daniel Kaluuya (Get Out) as a reality show contestant in Season 1's "Fifteen Million Merits"; Marvel star Hayley Atwell (Agent Carter) in a heartbreaking tale of synthetic love ("Be Right Back"); Emmy winner Jon Hamm (Mad Men) in the world's most twisted Christmas story ("White Christmas"); or Black Panther breakout Letitia Wright on a terrifying journey through a museum of horrors ("Black Museum").

So which familiar faces can fans expect to see when they tune into the anthology's fifth season? Throughout the upcoming three episodes, viewers will be treated to two more Marvel stars, a beloved TV villain, a throwback to the '70s, and one pop star, as well as a bevy of other actors they may recognize from their favorite franchises and TV shows.

The first of the three installments, "Smithereens," tells the story of "a cab driver with an agenda [who] becomes the center of attention on a day that rapidly spirals out of control." Playing the cabbie will be Andrew Scott, who most viewers will probably recognize as the deliciously villainous Moriarty on BBC's Sherlock series, where he clashed with Benedict Cumberbatch's titular detective with twisted humor and devilish charm. If you're not a Sherlock acolyte, you may still know Scott as the nefarious government agent "C" in the most recent James Bond movie, Spectre, or as the fan-dubbed "Hot Priest" from Fleabag's recently released second season.

Joining Scott for the ride in "Smithereens" is Topher Grace, most well-known as Eric Forman from the long-running sitcom That '70s Show. Of course, you may also recognize him as Spider-Man 3's Venom or as KKK leader David Duke from Spike Lee's Best Picture-nominated BlacKkKlansman. Rounding out the first episode is Damson Idris, the star of the current FX drama series Snowfall, who also appeared in a recent episode of Jordan Peele's Twilight Zone reboot.

Episode 2, "Rachel, Jack and Ashley Too"

According to the official synopsis, the second installment revolves around "A lonely teenager [who] yearns to connect with her favorite pop star — whose charmed existence isn't quite as rosy it appears." That episode, titled "Rachel, Jack And Ashley Too," stars none other than Miley Cyrus as the pop star in question. Obviously, Cyrus needs no introduction… but viewers may still be surprised to see the famous singer tackling a dramatic acting role. Since her turn as Hannah Montana, most of Cyrus' onscreen parts have simply been quick cameos in films like The Night Before, A Very Murray Christmas, and Guardians Of The Galaxy Vol. 2, or as herself on episodes of Carpool Karaoke, RuPaul's Drag Race, and the like.

Joining Cyrus in the episode are a couple of up-and-coming young actresses. Madison Davenport has appeared in films like Darren Aronofsky's Noah and the Tina Fey/Amy Poehler comedy Sisters. She also had a recurring role on Shameless and a starring role on From Dusk Till Dawn: The Series, but the character audiences are most likely to recognize her as is Ashley Wheeler, the cheerful cheerleader girlfriend of murder suspect John Keene in the HBO miniseries Sharp Objects. Some viewers may also know Angourie Rice, who has been in several high-profile movies including the Ryan Gosling comedy The Nice Guys, Sofia Coppola's The Beguiled, and in Spider-Man: Homecoming (and its upcoming sequel, Far From Home), as Peter Parker's classmate Betty Brant.

In "Striking Vipers," the third and final episode, "Two estranged college friends reunite in later life, triggering a series of events that could alter their lives forever." Starring in this installment is Anthony Mackie, who is most widely known to moviegoing audiences as Sam Wilson, aka Falcon, in the Captain America and Avengers movies — a role which he will reprise in the upcoming Disney+ streaming series The Falcon And The Winter Soldier. He also co-starred with Jeremy Renner in the Best Picture-winning film The Hurt Locker, and he will replace Joel Kinnaman as the lead of Netflix's body-swapping sci-fi drama Altered Carbon for Season 2.

"Striking Vipers" boasts a large cast that also includes Yahya Abdul-Mateen II, who starred in the Netflix drama The Get Down, appeared as the villainous Black Manta in Aquaman, and will next star in both HBO's Watchmen and Jordan Peele's Candyman reboot; Nicole Beharie, who was the star of Fox's Sleepy Hollow for three seasons and has also appeared alongside Michael Fassbender in Shame and on multiple episodes of The Good Wife; Pom Klementieff, aka the scene-stealing Mantis from Guardians Of The Galaxy and Avengers, whose feature film credits also include Oldboy and Ingrid Goes West; and Ludi Lin, who recently starred as the Black Ranger in 2017's reboot of the Power Rangers.

Which of these actors will survive their trip through Black Mirror unscathed? Find out when Season 5 hits Netflix on Wednesday, June 5.