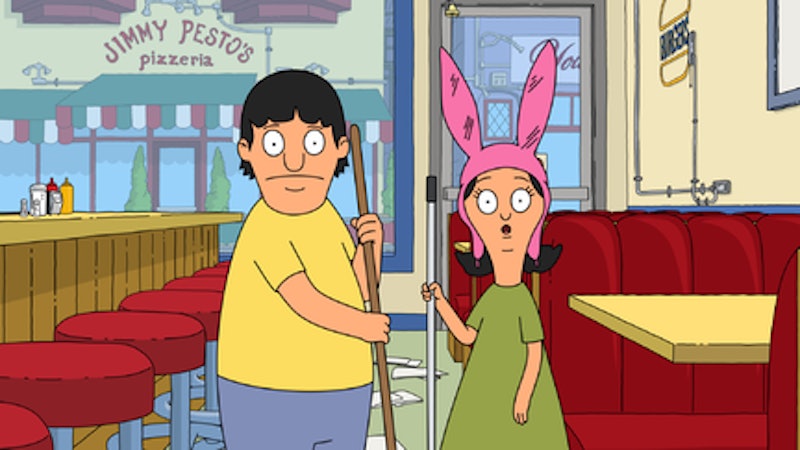 One of Hollywood's coolest married couples is teaming up for a project that will make Bob's Burgers fan squeal a Linda Belcher-approved "All right!". As reported by Deadline, Nick Offerman and Megan Mullally's new animated series from Bob's Burgers creator Loren Bouchard is currently in the works at Fox. The network has ordered a presentation for the series (that means they're committing to making a pilot), which is called The Great North.

Set in Alaska, the animated comedy follows the Tobin family, led by single dad Beef. He finds himself trying to hold his family together when his only daughter, Judy, pursues her art dreams in the mall, rather than staying put on the family's fishing boat. The details of the proposed animated series sound just as warm, weird, and fun as the family shenanigans that Bob's Burgers serves up — with the added promise of a weekly dose of Offerman and Mullally, of course.

Bob's Burgers' executive producers Wendy Molyneux and Lizzie Molyneux will serve as showrunners alongside actor and writer Minty Lewis if the presentation is ordered to series. In addition to Offerman and Mullally, the star-studded voice cast includes Jenny Slate, Paul Rust, Aparna Nancherla, Will Forte, and Dulcé Sloan. It's unclear who the actors will be playing just yet, but Offerman has to be Beef, right? The character description is basically Parks and Recreation's Ron Swanson if he was a single dad, living his dreams of communing with nature 24/7.

It's hard to pick just one thing about The Great North to be excited about, but the idea of a show regularly letting Offerman and Mullally work together is almost too much to handle. In addition to being one of the most talented married couples around, these two also make great scene partners. They've already played a married couple in the Bob's Burgers episode "Bob Fires the Kids," and Mullally's guest appearances as Ron's ex-wife Tammy II on Parks & Rec were always can't-miss TV. They also did a comedy special together called "Summer of 69." Basically, there's nothing these two can't conquer together, including writing a book — yes, that's happening too.

There doesn't seem to be any need to worry about these two spending too much time together either. In a recent interview with Parade to promote their book, The Greatest Love Story Ever Told, the couple revealed that they have a two week rule that says they can never spend more than two weeks apart. Offerman told the outlet, "Because of our two-week rule, I know we'll be together most of the time, and that means everything will be OK." That's right, everyone, they're funny and romantic. Go ahead and swoon, you know you want to.

While it's going to be a while before Fox makes a decision on The Great North, this show already sounds too good to pass up. It has a kick butt team of women creators with a Bob's Burgers pedigree, and the voice talents of two of Hollywood's funniest people. The world needs this show, if only so that there's a little more Mullally and Offerman awesomeness in it.