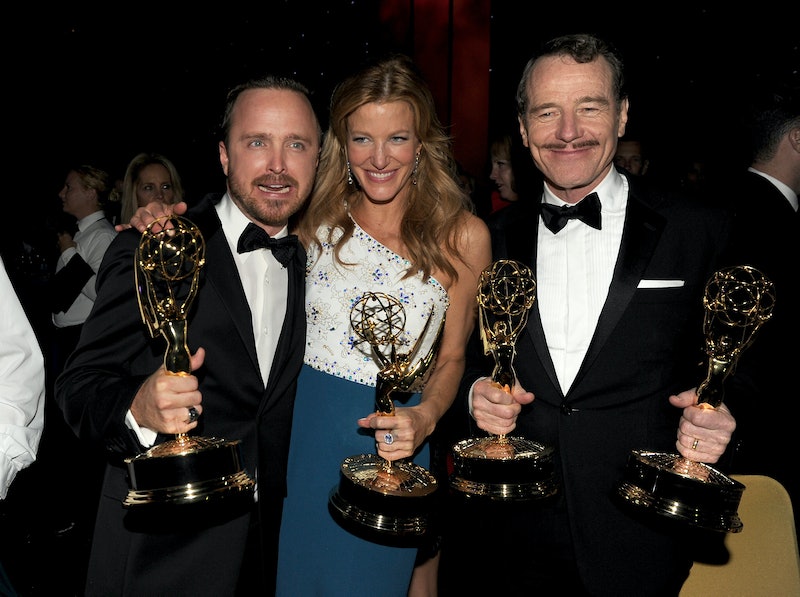 Say its name: Breaking Bad. Seriously, put away your books on rare gems and fry up some Los Pollos Hermanos chicken, because the Breaking Bad reunion teased a possible comeback for some of the show's most iconic characters. Entertainment Weekly has a new cover story on the 10-year anniversary of the AMC show (yes — it's been a decade since the premiere), and every piece of information revealed during the reunion will make you want to yell out Jesse Pinkman's delightful catchphrase. EW rounded up actors Bryan Cranston, Aaron Paul, Dean Norris, RJ Mitte, Anna Gunn, Bob Odenkirk, Betsy Brandt, Giancarlo Esposito, and Jonathan Banks for a Breaking Bad roundtable that brought out so many feelings. The cast laughed, they cried, they reminisced — and they hinted at some pretty cool things to come.

Norris, who played the surprisingly likable Hank, always knew that the AMC drama was going to be something. In the years sine they first shot the abbreviated first season, that fact has stayed with Paul, who played Jesse. "I remember when we were shooting the first season, Dean and I were talking, he goes, ‘You know, in ten years, we’re going to look back and say, ‘Goddammit! I used to be a part of Breaking Bad!’" he said during the reunion. "And now it’s crazy that 10 years has passed, and I am still constantly thinking that. It’s like, wow, how lucky we all are.”

Breaking Bad certainly featured its fair share of conflict and betrayal, but even a decade later, the cast seems as close as ever. “I love these people,” Paul told the magazine. “I feel blessed to have shared this incredible experience that is Breaking Bad with each and every one of [them]."

Meanwhile, star Cranston waxed poetic about their time together during the show. Here's how he felt about the reunion (content warning: raw honesty and emotion ahead):

"You can’t just move on. Something that was so indelible and meaningful in your life and you can’t, and I don’t want to. I want to hold on to those good memories of that gathering, both then and during our seven years together. So, it’s a bit melancholy, actually. Bittersweet."

So, yes, it seems like there were definitely tears happening at the Breaking Bad cast reunion. Good ones, though! According to EW's cover story preview, it was Brandt — who played the tightly-wound, long-suffering Marie — who shed the most of them.

If the reunion quotes and photos weren't enough already, EW also has plans to release an hour-long video interview-slash-roundtable with the cast. Believe it or not, but even stoic Banks — who played the fearsome Mike Ehrmantraut on Breaking Bad and continued the role on Better Call Saul — gets emotional while reminiscing. Right there! On camera!

Breaking Bad was so many things — it was often violent, bleak, and heartbreaking. It wasn't a show for everyone, and it still isn't. But its artistry and powerhouse acting will cement its place in "prestige TV" history for decades to come. That's just a fact. It often feels as if it's still on the air, with references to the show working its way into pop culture as recently as a 2017 episode of Black Mirror.

Breaking Bad isn't for the faint of heart, but those who soldier through it will be rewarded with tight storytelling, gorgeous shots of Albuquerque, and a satisfying ending. Also, some literal explosions and the origin of the throwing pizza in frustration .gif. So, whether you're a veteran of Breaking Bad or just marathoning the series for the first time, the Entertainment Weekly cast reunion will definitely have something for you.