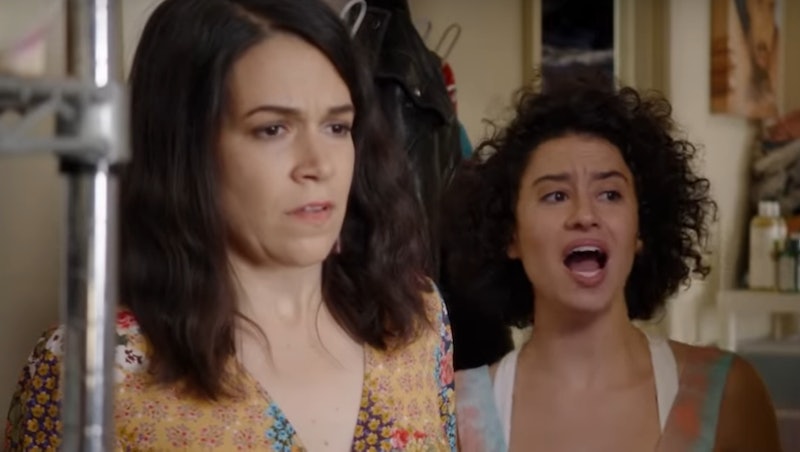 Don't be sad because it's over. Laugh hysterically because it happened. And also because there's still one more side-splitting season left. So, technically, it's not actually over yet. That's right, queens: the Broad City final season trailer has arrived, and it's basically a whole lot of Abbi and Ilana being ... well ... Abbi and Ilana.

On Jan. 24, Broad City will return for its fifth and final season. "But what will I do without my two favorite awkward women," you wonder? Maybe take up a hobby? Just start from the beginning again and watch all the re-runs? The choice is yours, and the possibilities are endless. You'll be OK.

Before you start pre-maturely mourning the loss of the show, though, take some time to indulge in the trailer for its final season. It's here and it's weird and you can rest assured knowing that neither Abbi nor Ilana — the eponymous characters based on the real-life antics of the show's creators, Abbi Jacobson and Ilana Glazer — have changed all that much since last you saw them. Silver lining?

The final Broad City trailer is barely more than one minute long, but boy, does it pack a whole lot of clips into a short amount of time. It kicks off with a fully nude Ilana cheerfully telling Abbi, "Good morning, b*tch," and thus the tone is aptly set.

The scenes that follow are super brief — it's more like a lightening-fast montage of blink-and-you'll-miss-it moments, TBH — but they're just as wild as you'd expect. In a nutshell ... Wait. Actually, trying to explain this trailer kind of seems like an impossible task. It's not like you need any context to enjoy the show. This isn't Game of Thrones we're talking about here.

There's one clip where a leather-clad Ilana does a Matrix-style back-bend move. There's a moment where Ilana kisses Rachel Dratch. There's a scene where Abbi and Ilana — wearing nothing but bras and jeans — walk out of some dressing rooms, to which Ilana's mom (played by Susie Essman) gleefully tells a saleswoman, "Look what I brought you: fresh virgin breast-meat."

There's ample dancing in what one can assume is Bed, Bath, & Beyond. There's screaming, groaning, gagging, sneaking around, perhaps some light kid-napping, and definitely some clinking of drinks. It's undoubtedly going to be one hell of a wild ride, my friends.

It's a bummer that such a great show has to come to an end, but Glazer and Jacobson — who not only created and starred in the show, but had a hand in writing, directing, editing and producing it too, according to a recent conversation with Variety — want to pay their positive experience forward.

"I want us both to bang out business, get shows and movies going that have other voices," Glazer told the publication during an interview published on Jan. 23. "I want to get the next generation of talent going. Like, Broad City is so f*cking good, but we did it, and now we have other skills. Women need to be in more decision-making positions, and now we are."

YASS, QUEENS! Women supporting women. Can't be mad at that. Sad about the show coming to a close, sure. But at least it's for a super solid reason.