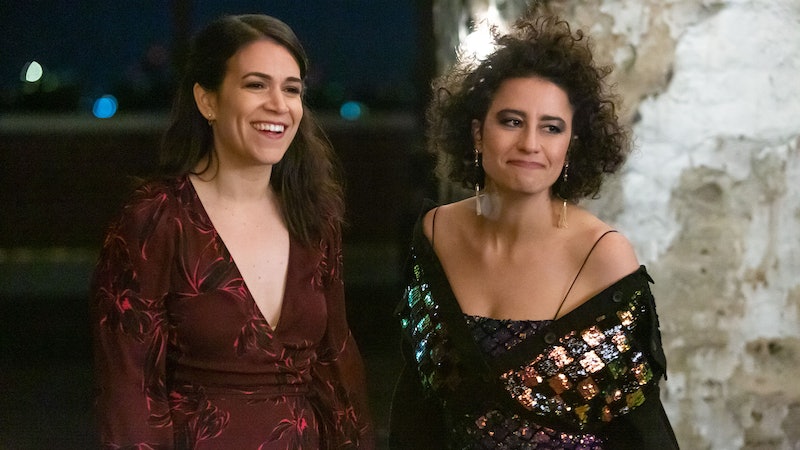 Spoilers ahead for the Broad City series finale. Abbi and Ilana's story may be over, but at least the Broad City series finale ending was the perfect sendoff. It contained everything fans have come to love about the show over the last five years: Abbi and Ilana running frantically around New York, professions of their deep love for one another, a party, pop culture references, and a bizarre plan to lug a toilet across the city (because what else?). Ultimately, it stayed true to the series Broad City has always been while paying homage to a certain comedy that helped to make it possible. And thanks to its honest and hilarious depiction of female friendship, Broad City is now just as iconic as any show that paved the way.

The March 28 episode followed Abbi and Ilana's last day in New York City together before Abbi moved to Boulder for her art program. A four-month time jump showed that, of course, they've maintained their friendship despite the distance, but the ending also seemed to pass the baton to other young friends starting their city adventures anew. It wasn't meant as a cliché tie to a spinoff (looking at you, Pretty Little Liars), but a nod to the relationship the show was about from the start — because the city, and the world, is full of "beautiful, deep, real, cool and hot, meaningful, important" friendships just like the one that Abbi and Ilana share.

It must be noted that the pair of friends who talked about making change with a homeless person came directly from the first episode of Abbi and Ilana's Broad City web series, which preceded the Comedy Central show. But the finale also referenced another groundbreaking comedy about female friendship: Sex and the City.

Throughout the episode, Ilana and Abbi repeatedly affirmed their plan to meet in St. Louis when the apocalypse happens. In the Sex and the City movie, Carrie befriended her assistant, Louise from St. Louis, and for Christmas, Louise gave Carrie a copy of the film Meet Me in St. Louis. Ilana also had a very Carrie moment while writing her grad school letter in "Lost and Found" and the show has called back to SATC in other seasons, so recognizing it again here was fitting. Though the two shows are vastly different, SATC was a cultural phenomenon that depicted, in frank detail, how female friends talk about and have sex. And it paved the way for Broad City — an even franker comedy about female friendship — to exist.

But the finale was also a reminder of what made Broad City so unique. Carrie, Samantha, Charlotte, and Miranda wouldn't be caught dead carrying a toilet across the Brooklyn Bridge, but for Abbi and Ilana, it was par for the course. The two didn't have their lives figured out when we met them, and though they have things semi-more-together now, they still have a long way to go. Sex and the City was about glamour and shoes and Manhattan nights out, but Broad City portrayed the very real, hectic feeling of navigating New York as a broke 20-something — and from the other side of the bridge.

With its borderline vulgar discussions of periods, poop, and sex, Broad City was groundbreaking in its own right. Though Workaholics, Comedy Central's other web series turned TV show about foul, stoner friends, is similar in tone, Broad City showed women partying hard — and wearing period pants while doing it. Seeing women be real, gross humans just like men wasn't just incredibly important — it was incredibly funny.

So much like Sex and the City, Broad City helped to advance the way women are seen onscreen and off. And though the SATC legacy is hard to usurp, Broad City is every bit as iconic. Abbi and Ilana are two badass kweens who will live on in fans' hearts — and continue to inspire other real-life BFFs — for years to come.