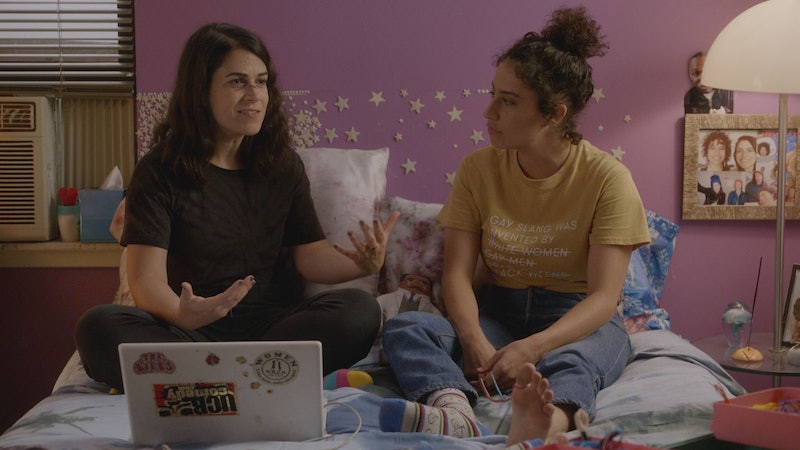 Spoilers ahead for Broad City Season 5, Episode 5. Abbi and Ilana on Broad City have, and will always be, BFFs. But as they push further into adulthood, they'll naturally start depending on each other less. Ilana has always had an issue when it comes to boundaries, but just because she and Abbi are growing up — and ever so slightly growing apart — doesn't mean their friendship is any less strong or significant.

In the show's Feb. 21 episode, Abbi runs into her college friend Donna, who invites her to a party at the Museum of Modern Art. While Ilana is disappointed that Abbi won't be coming to her one-year anniversary dinner with Lincoln and Abbi is nervous to go to the party alone, they both have meaningful growth in just one night without each other. Ilana and Lincoln realize they don't want the same things in life and officially break up, and Abbi opens herself up to new experiences in the art world and even makes a date with a woman — her ER doctor played by Clea DuVall. (Abbi Jacobson told Vanity Fair in 2018 that she dates both men and women and in an interview with Bustle, Jacobson said this plot point for her character was pulled from her real life.)

Besides dealing with the heartbreak of ending things with Lincoln for a second time, Ilana is distressed by the fact that Abbi had such a momentous night without her. While Ilana's takeaway from the evening is, "Let's never be apart again," Abbi has quite the opposite reaction. "I realized, like, I need to put myself out there alone to meet all these rad art contacts," Abbi says. "This was really a transformative night, dude." Ilana's reaction is reminiscent of how she felt in the Season 2 episode, "Hashtag FOMO." But rather than this be a drunken alter-ego or nose piercing that Ilana missed out on, Abbi came to some sincere life realizations.

Yet, it's a big deal that Ilana keeps her feelings (as best as she can) to herself and tries to support Abbi. And it's a big deal that Abbi didn't rely on her more outgoing friend to have this life-changing night. Not only is Abbi older, but she has always been more naturally mature, and so it's OK for her to make friends with other people who share her interests and goals. And while that might hurt Ilana right now, it's just a symptom of growing up; a little less codependence will only help to further their maturity.

It's natural that as you get older, your friendships will change. This can be due to romantic relationships, marriage, relocations, job responsibilities, parenthood, or simply a shift in priorities. Abbi and Ilana have both have started to focus more on their respective careers, and as they take on more responsibilities, that might mean they have less time to devote to their friendship. But that doesn't mean the end of a friendship. As The Atlantic outlined, it's all about maintaining the friendship in a way that's true to the relationship foundations you've already established with one another — and living up to shared expectations.

Just like Abbi is embarking on a new part of her life by exploring her sexuality and looking into artists' residencies, Ilana will soon have her own things going on too. She'll need a new roommate now that Jaime is moving out, she's recently single, and she wants to go back to school. So Ilana, in particular, will have to adjust what she expects from their friendship so they both can make room for these new development in their lives. And while it's a new chapter for both of them, it's not an ending — simply an evolution that these kweens' friendship can certainly handle.