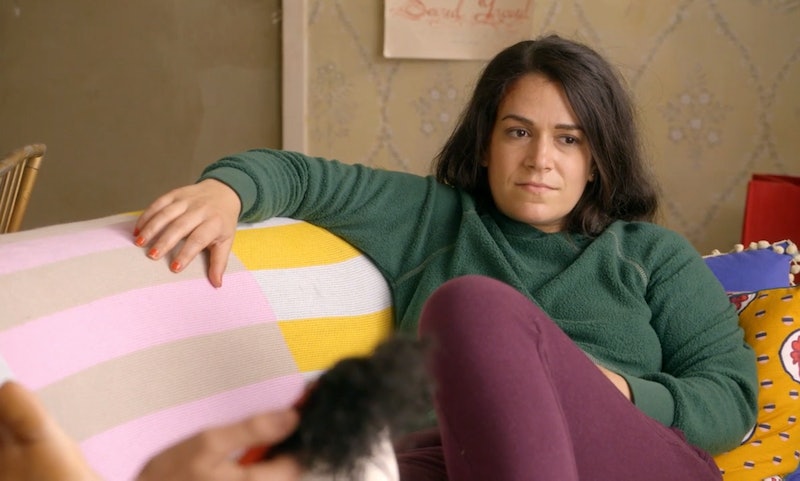 Spoilers ahead for Broad City Season 5, Episode 7. Ilana and Abbi's New York City "Shenanigans" are coming to the end — and I don't just mean the ending of the series. During the March 7 episode, it's revealed that Abbi might leave New York on Broad City. After turning 30 in the Season 5 premiere, she's struggled with a few serious blows throughout the season: her rent went up, she lost her retail job, and her new girlfriend broke up with her not once, but twice, because she felt Abbi wasn't mature enough. So it makes sense that Abbi is looking for a change that will help her grow. At the end of "Shenanigans," she finds this change in an art residency at Colorado Art Center. Abbi applying to this program will most likely mean she'll leave her Broad City bestie and her home of NYC, at least temporarily. And while I only want the best for the characters of Broad City, the idea of leaving New York City to grow up is a tired trope that feels uncharacteristic for the series.

As Ilana has frequently made clear, Abbi is not from the New York area — she's a "Main Line Jewess" from the wealthy suburbs of Philadelphia. So unlike the Long Island-born Ilana, who adores living in the city and can't imagine being anywhere else, Abbi seems ready to see what life has to offer beyond the five boroughs. That's all fine and well, since she seems to need a bit of push to set her on a sustainable and fulfilling career path. But after five seasons of delightful, New York City-based shenanigans, the message that Broad City seems to be sending is that Abbi can't grow up without moving away, which is a plot device that, frankly, is well past its expiration date.

We've seen it before with Chandler and Monica in Friends, Betty in Ugly Betty, and Hannah and Marnie in Girls. Yes, these moves may have ultimately made sense for the characters, but isn't there a more creative way to close out a show not just set in the city, but so imbued with the spirit of New York? It might be cliché to say that the city feels like its own character in Broad City, but in this case, it's true. New York has deeply informed everything about who Ilana and Abbi are: their hustle mindset, their spontaneous (and disastrous) misadventures, even the way they met. That the show perfectly executes the chaos of coming of age in NYC with such blunt, hilarious realism is what made many fans fall in love with it in the first place. So having Abbi leave isn't just a betrayal to Ilana, who's already upset that Jaime and Eliot are moving, it's an easy out — one that goes against the originality Broad City has always championed.

I currently live in New York, but I have lived in four states since Broad City first premiered in 2014. So my qualms with this particular storyline don't have anything to do with a personal allegiance to New York City. I understand why it isn't for everyone and fully recognize the difficulties that often come with living here. Instead, my issue is with the fact that a show so thoroughly committed to the city (the word "city" is in its name!) has decided the most appropriate ending is for one of the main characters to (temporarily?) severe ties with the place.

Since there are still three episodes left, it's premature to judge how Broad City will wrap up. I want the series to end with Abbi and Ilana pursuing the best versions of themselves, and after four stellar seasons, the show has built up enough goodwill that I feel certain the conclusion will be satisfactorily bittersweet. But does Abbi really have to go against the very heart of the series to accomplish her goals?