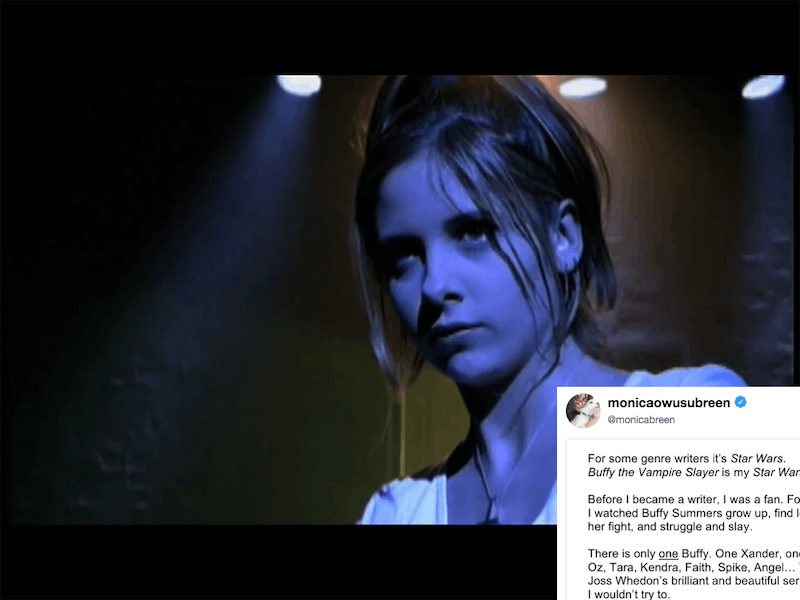 Buffy the Vampire Slayer is going to make a comeback to television sooner than later, and it looks like Sarah Michelle Gellar's iconic character won't be at the center. Recent comments from the Buffy reboot writer Monica Owusu-Breen suggest that the new series would introduce a brand new slayer, and though heartbreaking for some, her reasoning for doing actually makes a lot of sense.

In a Thursday, July 26 tweet, the writer addressed Buffy fan's critiques about the show's potential direction, expressing her fandom for the WB legend in the midst. Owusu-Breen let fans know just how much she loves and respects the original series, saying, "For some genre writers it's Star Wars. Buffy the Vampire Slayer is my Star Wars."

She continued: "Before I became a writer, I was a fan. For seven seasons, I watched Buffy Summers grow up, find love, kill that love. I watched her fight, and struggle and slay. There is only one Buffy."

Along with stressing the significance of Buffy, Owusu-Breen then expressed the importance of the supportive group of friends who backed Gellar's character as she defeated evil. "They can't be replaced," Owusu-Breen said, also confirming that "Joss Whedon's brilliant and beautiful series can't be replicated."

The late-90s, early 00s phenom followed the life of Buffy Summers and her pals Willow, Xander and Cordelia, as they took down vampires and other evil forces threatening the day-to-day life of Sunnydale's citizens. Over its seven seasons on air, the series garnered a massive cult-following. So seeing as Hollywood has taken a keen interest in the nostalgia factor, a Buffy reboot totally makes sense, right? Well, according to Monica Owusu-Breen, who was tapped by Fox to write, executive produce, and showrun the project, in order for a Buffy reboot to be done right, it must be approached from a fresh and new angle — potentially introducing a new slayer into the mix.

According to Deadline earlier this week, a script for the reboot hasn't been finalized and the show reportedly hasn't been pitched to any networks or streaming services yet. But knowing that the Buffy reboot is still in the beginning stages didn't stop backlash about Owusu-Breen's possible plans for rebooting the beloved series.

Knowing that there's no way to emmulate the on-screen forces that are Buffy and her amazing team, Owusu-Breen and her team's choice to take the series in a new direction is super wise. Instead, Owusu-Breen wants to take another approach, reshaping the series and its cast to reflect the current political and cultural climate of toady. And yes, that could also mean leading with a brand new slayer.

The Buffy reboot is reportedly in the beginning stages of development, but hints towards the direction Owusu-Breen and team plan to take have been given. According to a statement shared by the show's producers — via Deadline — the reboot "will be richly diverse, and like the original, some aspects of the series could be seen as metaphors for issues facing us all today." And that diversity will seemingly be evident in its casting selection, as it's also been said that the new slayer could be a black woman.

Owusu-Breen and the team behind the reboot seem to have it all under control — the original Buffy would be proud.

More like this
The Office Lego Set Includes All Your Favourite Dunder Mifflin Characters
By Sam Ramsden
Netflix Just Rebooted A Classic ‘90s High School Drama
By Maxine Harrison
17 Years Ago, 'Hannah Montana' Reportedly Almost Cast This 'Gossip Girl' Star
By Grace Wehniainen
Netflix Reveals First Look At Wednesday In The 'Addams Family' Spinoff Series
By Bustle Editors
Get Even More From Bustle — Sign Up For The Newsletter