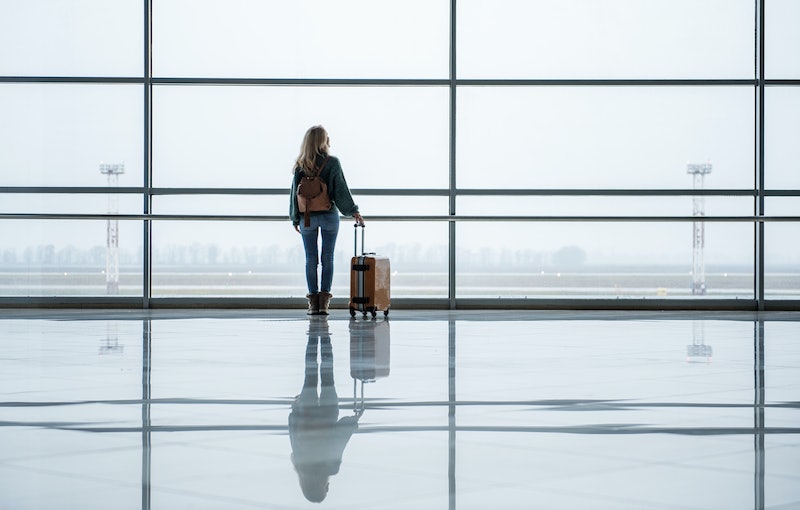 We hear a lot about the best day to book your plane ticket online and what time of year you'll find the best deal on airfare to Cancún, but one thing many avid travelers don't hear much about is whether or not the cheapest time to fly changes based on the airport you're leaving from. This is surprising, considering talk of airfare prices often comes with mythological ideas proportional to folklore: Depending on who you talk to, you'll get a different, yet confident argument regarding the best time to fly. One friend swears Tuesday nights are the cheapest nights to buy tickets, while a co-worker vouches for last-minute online bookings. A friend of a flight expert argues that approximately six weeks before the flight is the sweet spot. In other words, everyone believes in some version of airline-related folklore, but for some reason, talk of how airports affect that airfare price haven't really permeated the larger conversation.

However, if this new study from Groupon Coupons is any proof, it should. Over the last five years, according to their site, they have been collecting data with the help of the Bureau of Transportation Statistics to find out when people were taking domestic flights from the 20 biggest airports in the country, and for how much. What they have now is a comprehensive study that pretty much indicates flight prices vary by airport, and season. Each airport has an affordable season and while it might seem totally random, it makes sense. Airfares fluctuate seasonally, but not at the same rate for all airports.

The other airports surveyed — Atlanta (ATL), Phoenix (PHX), Minneapolis-Saint Paul (MSP), and Fort Lauderdale (FLL) — all offered their cheapest flights in the fall.

What we learn from this collection of data points is that one of the most important factors to consider before booking your tickets is the airport and the date of the flight. Despite the fact that all of these airports have high volume in common, they operate differently and need to be considered independently. There isn't one single universal truth regarding ticket prices that encompasses every airport in the U.S. and this data does not cover the date of booking, it covers the date of departure.

So while it's neater and nicer to collect general ideas about travel, it really is an individualized subject. So sure, looking for the secret hack to getting a cheap ticket is might work sometimes, but taking seasonal data for actual flight dates into consideration is going to be a sure bet. It's not when you book, it's where you book, and when that flight is.

More like this
You Can Stay At The 'Hocus Pocus' House On Airbnb
By Alexis Morillo
Craving The Beach? Here's Your Guide To A Solo Vacation In Turks & Caicos
By Alexis Morillo
The 5 Best Laptop Power Banks
By Vanessa Spilios
Angel Number 111 Is All About Manifesting Your Power
By Brittany Beringer and Nina Kahn
Get Even More From Bustle — Sign Up For The Newsletter