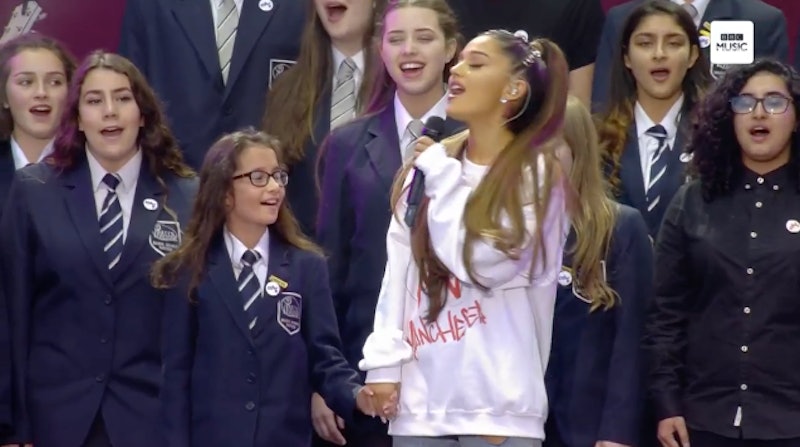 Ariana Grande welcomed many special guests to the stage at the One Love Manchester tribute concert on June 4, but the Parrs Wood High School Choir was a particularly special group. According to People, some of the choir's students were in attendance at Grande's May 22 concert, where a terrorist attack occurred. And the choir girl that Ariana Grande hugged at One Love Manchester totally stole the show during their touching performance of Grande's song "My Everything."

The song opened with a solo by 12-year-old Natasha-Rose Seth, and she was later joined by Grande on stage. As first reported by People, Natasha-Rose's father tweeted about the performance. In a series of tweets, he wrote,

"So my little girl sang and cried next to her hero, Ariana Grande. Tashy, you and the choir did us and Manchester proud. We love you xx."

Seth was impressive in her own right, performing a hit song in front of a huge crowd of about 50,000 people, according to USA Today. That is no small feat and Seth gave it her all before Grande joined them and held her hand. In the middle of the song, Seth began to break down a bit and Grande embraced her. Awww!

At the conclusion of the song, Grande even lowered her mic so that Seth can sing the final lyrics of the song. The crowd loudly applauded the performance, as Grande gave Seth another big hug and patted the backs of the other choir members.

The One Love Manchester concert featured performances by Katy Perry, Justin Bieber, Miley Cyrus, Coldplay, Pharrell Williams, and more artists who paid tribute to those affected by the May 22 terrorist attack, as well as the recent June 3 attack in London. Even amid all those big stars, the choir's performance was all the more special.

You can watch Seth, Grande, and the Parrs Wood High School choir's performance in the video below.

It's a heartfelt moment that Grande shared with city of Manchester.