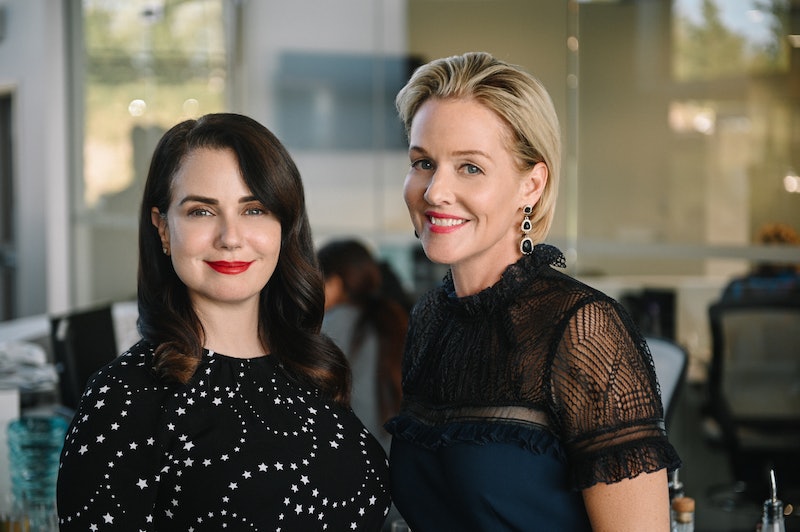 The College Admissions Scandal, a movie based on the true story of wealthy parents who allegedly bought their children's acceptance into elite universities, arrives seven months after Operation Varsity Blues ensnared Felicity Huffman, who pled guilty, and Lori Loughlin, who's denied the charges. If you came into it looking for a voyeuristic exposition of the bribery scheme, Lifetime's College Admissions Scandal, disappointingly, does not deliver. But it's still a fascinating study of the white-collar moral gymnastics that made the scandal possible.

Instead of actors, the movie centers on Bethany (Mia Kirshner) and Caroline (Penelope Ann Miller), two Brentwood moms who feel duty-bound to provide the best for their children — no matter the cost or ethical boundaries that they must cross. It's Bethany, a divorced hedge fund manager with bitchy charisma, who comes bursting into the coffee klatch with the name of the man who can alleviate their fears of sending their kids to second-tier colleges: Rick Singer (his is the one name not changed by filmmakers). Singer is a college consultant who can, for a six-figure fee, sneak an underperforming student through the back doors of America's most selective universities. He helps them cheat on the SATs and bribes coaches into abusing their athletic recruiting privileges. "It's all one big Rodeo Drive shopping spree to these parents," says one college counselor. "Chanel, Gucci, Mercedes, Rolex, Harvard."

Bethany is one of those parents. She wants her daughter Emma to go to Yale, but Emma doesn't have the grades. Meanwhile Caroline's son Danny is more concerned with his music than completing high school. Their problems are not unique, but being rich has afforded them the belief that they're entitled to whatever they want. Bethany signs up for Rick's services without pause, positively tickled to learn it will double as a tax write-off. Caroline, who comes off more sympathetically, wants the same outcomes but has less of a stomach for it. "Are they bribes?" she asks her husband, Jackson. "Yeah, they're kind of bribes," answers Jackson, an attorney, before correcting himself. "No. They're actually bribes." They initially decide not to use Rick, citing concerns that their son won't go along with it. "You know him, he's so…" Jackson trails off, neither of his parents seemingly able to name Danny's ability to see right from wrong.

It's when Bethany has to get Emma on board that her talent for self-rationalization shines. "Remember when we went on the college tour and we saw those concert halls and the stadiums that were named after the families that gave the money to build them?" she asks her daughter. "Do you think the descendants of those people had trouble getting into those schools? Of course not. And we understand that and we think its fair because we know those people gave that money to preserve the future of the children they love."

For Bethany, the love you have for your child is an ethical hall pass. The difference between endowing a stadium and cutting Rick Singer a check isn't that one is illegal, but how much money each costs. She goes on to tell Emma that "it's not just the wealthy who find ways to do the best for their children." She's heard stories of "minority students" — to Bethany, being wealthy and being white are apparently synonymous — accepted to Yale with SAT scores 200 points below Emma's. "They have their advantages, and we have ours." It's all relative.

For Caroline, the decision to hire Rick is more straightforward. "Parents are supposed to do anything they can for their kids," she insists. "There shouldn't be a limit." She likens Singer's expensive loopholes to the things she and Jackson have already spent money on to help Danny: private schools since kindergarten, tutors, SAT prep. She never interrogates how giving him every advantage could be different than outright buying his acceptance.

Inevitably, they both get caught, and it's then that the contrast between Caroline and Bethany is sharpest. When police show up to arrest Caroline on charges of racketeering and mail fraud, she stares out the window at the swirling red light, struggling to catch her breath. Bethany, on the other hand, with her dragon lady tenacity, is still adamant she's not been caught even after she's been hauled into the station. When she loses her job over it, she's shocked. At court, she's shifty and reluctant to confirm that she'll make her arraignment, so it's wild to hear her complain, scenes later, that she's at the mercy of a lynch mob.

Like many Lifetime movies, The College Admissions Scandal is true crime pulp wrapped in a morality tale. But it's also deceptively ambitious compared to the ethical dilemmas at the center of, say, Sleeping With My Student or The Cheerleader Escort (both airing on the network this month). Because for all of Bethany and Caroline's differences, it's not just wealth and greed that unite them. It's their lack of empathy, which feels reserved for those who live on the well-heeled plane where real consequences are rarely felt. The College Admissions Scandal skewers the privilege of being able to buy anything you want, but it also confronts something more insidious: the privilege of believing you're entitled to it.