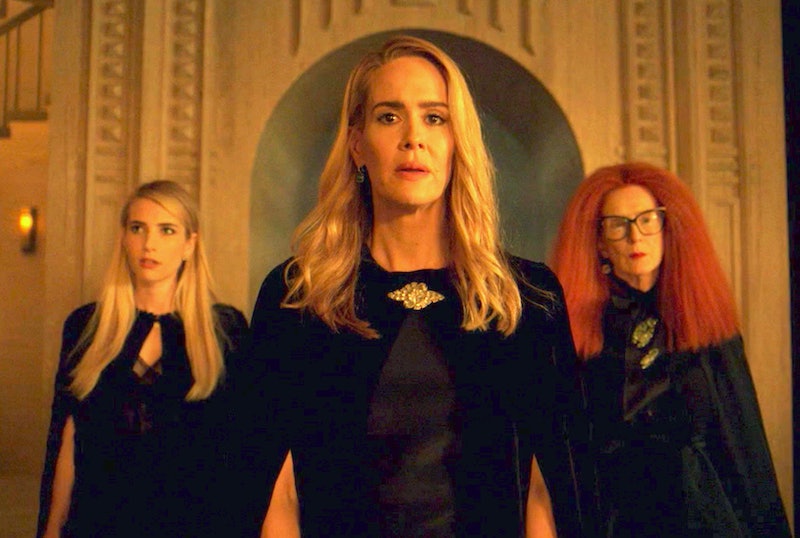 Spoilers ahead for Episode 3 of American Horror Story: Apocalypse. This season's edition of American Horror Story has long been planned to be a crossover of two of the series' most popular installments, and after two episodes with few tangible throwbacks, some old faces have finally shown up. And it was prettWhen three familiar witches, Cordelia, Myrtle and Madison, emerge from the fog, AHS: Coven connects to AHS: Apocalypse once and for all, and it could totally change how things proceed from here.

Longtime AHS fans will remember the iconic trio from Coven, and luckily, they show up at quite the opportune moment. In true AHS fashion, pretty much the entire original cast of the first two episodes of the season had just been killed when the witches enter the scene. That's right — Venable (Sarah Paulson) and Mead (Kathy Bates), the leaders of the outpost where the rich and promising had escaped the apocalypse, poison a batch of fresh apples, and take nearly everyone out just as the audience has become invested in their stories. You truly never know what this show is going to hit you with next. (Really, who thinks of poisoned apples?)

Cordelia (also played by Paulson) and her wingwomen come upon the outpost seemingly at random, but it soon becomes clear that they have a purpose. "Find our sisters," Cordelia declares as they storm the facility. They resurrect three of the people Venable and Mead have just killed — Dinah, the former talk show host, Mallory, the assistant, and Coco, Mallory's snobby, high maintenance employer.

It would seem that these three have been witches the entire time, and they, along with the audience, have been in the dark. Though she can't explain them, hints of Mallory's supernatural abilities appear early in the episode, making the development on her part not a total surprise. Early in the episode, she has an encounter with Michael, the grown-up version of the devil baby birthed in Season 1. He's the one tasked with deciding who lives and who dies, and as she's questioned by him, she blasts objects around the room and stokes the fire without moving a muscle.

Michael seems afraid of her in that moment, and asks her what she is. "I don't know," she replies. "What are you?" The fact that he shows any amount of surprise or fear is an unexpected development. It proves that the witches from Coven could be a huge threat to Michael and the Cooperative, the mysterious group who facilitates the survivors' outposts. They're likely not going to be happy that their sisters were temporary casualties in Michael and Venable's post-apocalyptic power struggle, and they could be out for blood from here on out.

The witches are apparently unaffected by the toxic, nuclear wasteland that brought demise to the world as we know it. They stroll through the foggy, irradiated environment with ease, without so much as a stray hair out of place. We know from the reappearance of Brock (Billy Eichner), Coco's boyfriend who didn't reach the escape plane in time, that weeks out in the elements can bring along cancer, scarring, and hair loss. But the witches are insusceptible to those effects, at least on a surface level.

Another relevant development that occurs in this episode: Venable is dead. As we learned last week, Mead is a robot of some kind, and now viewers know she's programmed to have an allegiance to Michael that overpowers all else. She shoots Venable and is now on Michael's side, meaning that the Coven witches could be the only force left that's capable of threatening the sinister entity.

Michael's intentions aren't neatly outlined just yet, but given the fact that he's literally the Antichrist, he can't have the world's best interests at heart. He may be behind the apocalypse itself, or at the very least, he's working to make the world a much darker place than it ever was. If that's the case, so far, he's succeeding. But the introduction of Coven's characters threaten that goal, and if he crosses them, it probably won't end well.

More like this
'The White Lotus' Season 2 Trailer Teases Multiple Affairs & Another Dead Body
By Bustle Editors
The New Grey's Anatomy Interns Have Fans Feeling So Nostalgic For Season 1
By Brad Witter
Shonda Rhimes' Net Worth Makes Her One Of The Wealthiest People In TV History
By Hugh McIntyre
How Much Are The 'Schitt’s Creek' Stars Worth?
By Hugh McIntyre
Get Even More From Bustle — Sign Up For The Newsletter