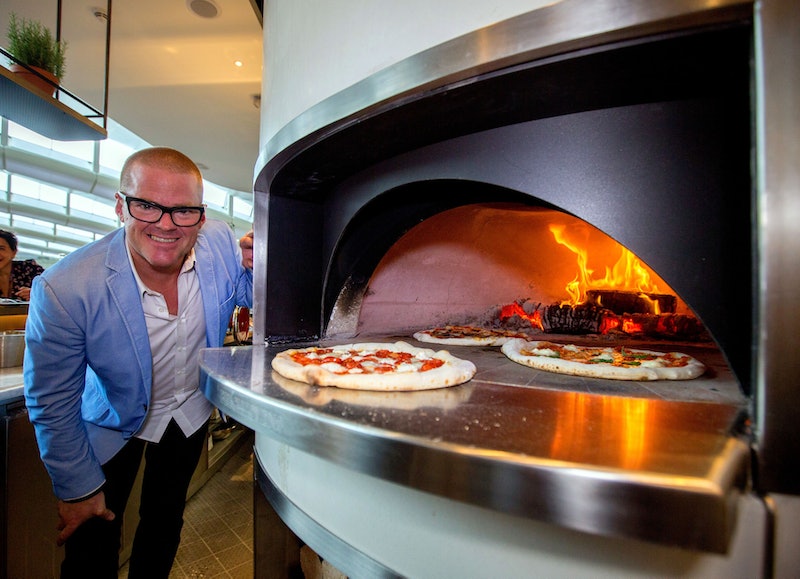 When times are stressful — and they most certainly have been for a great many people these past few months — one of the best ways to unwind is by watching a relaxing cooking competition series on Netflix. Shows like The Great British Baking Show and Nailed It! are low-stakes, good-natured entertainment that can help you feel just a little bit better about the state of the world. Netflix is unveiling a new series called Crazy Delicious that looks to be in the same vein, but any cooking competition series is only as good as its judges. Thankfully, the Crazy Delicious judges look as though they will be up to the task.

The new British series, which is being co-produced by Netflix and the UK's Channel 4, features three celebrity chef judges: Heston Blumenthal, Carla Hall, and Niklas Ekstedt, and their credentials are nothing to sneeze at. The series is referring to them as "Food Gods" rather than judges, and it seems like a pretty apt description, as each of the trio has already achieved a level of fame and acclaim for their prowess in the kitchen. Read on for more about them:

Blumenthal is the owner and proprietor of The Fat Duck, a restaurant in England that has been awarded the elusive three Michelin Stars (the maximum number allowed). The restaurant is hailed as one of the best in the world, but its success hasn't caused Blumenthal to rest on his laurels. He also owns the two-Michelin Starred London restaurant, Dinner, as well as a Michelin Star-bearing pub called The Hinds Head. Blumenthal is also a TV veteran, having starred in a number of food and cooking-related series including Heston's Great British Food, Heston's Fantastical Food, How to Cook Like Heston, Heston's Feasts, and In Search of Perfection.

Hall, who may be the most recognized of the judges in the U.S. The lone American of the three, Hall rose to fame as a contestant on the Bravo series Top Chef in 2008. She finished as a runner-up that season, and her popularity with fans led her to return to the show's "All-Stars" season in 2010. In 2011, she became a co-host on the ABC cooking talk show The Chew, a role she maintained until the series came to an end in 2018. Hall has also authored a number of cookbooks, including Carla Hall's Soul Food.

Finally, there's Ekstedt. A Swedish chef, restaurateur, and TV personality, Ekstedt is well-known in his home country of Sweden and throughout Europe. He owns the Michelin Star restaurant Ekstedt in Stockholm, and has hosted or starred in loads of international TV series, including Norway's New Scandinavian Cooking, Sweden's Four Hands Menu, and the United Kingdom's Saturday Kitchen.

Crazy Delicious looks downright delightful, and the series' talented judges are a big reason why. Hopefully, the show turns out to be just what you need to take the edge of during these trying times.

More like this
Here’s Everything Coming To & Leaving Netflix In July
By Grace Wehniainen
What’s New On Netflix: The Return Of 'The Umbrella Academy'
By Arya Roshanian
The Umbrella Academy Cast Breaks Down That Wild Season 3 Finale
By Gretchen Smail
Bachelor Nation's Blake Horstmann Is Dating 'Love Is Blind' Star Giannina Gibelli
By Jake Viswanath and Radhika Menon
Get Even More From Bustle — Sign Up For The Newsletter