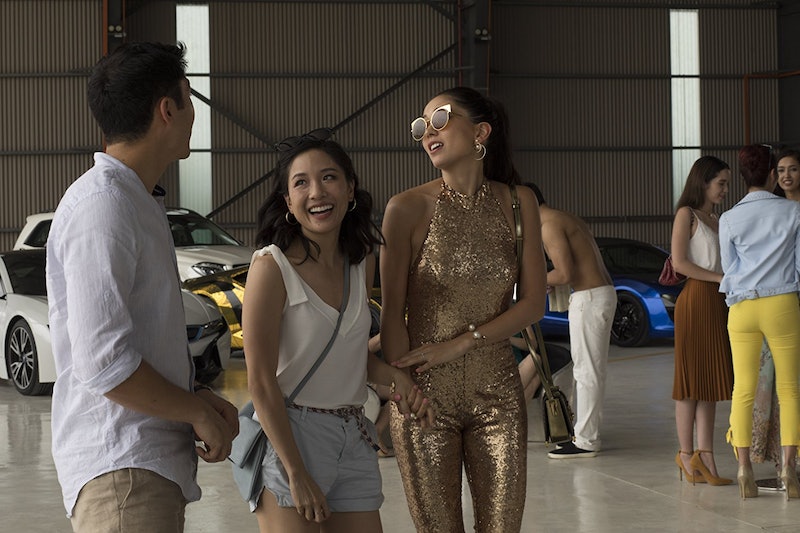 Crazy Rich Asians is finally here. The hyped rom-com is shattering barriers when it comes to Asian representation in Hollywood, with a cast that's nearly all Asian in roles that aren't typically given to Asians in American films. The movie is so far getting rave reviews for both its content and its minority representation, and it looks like the Crazy Rich Asians soundtrack is destined to earn the same accolades. The song selection for the film is just as fun as the rest of the movie, and it also puts Asian performers front and center. Check out the full track list below:

As you can probably deduce by looking at the names of some of the artists, there is a ton of Asian representation on the soundtrack. VAVA, Grace Chang, Jasmine Chen, Yao Lee, and Lilan Chen are Chinese; Sally Yeh is Taiwanese; and Katherine Ho, Cheryl K, Kina Grannis, and Awkwafina are all American with Asian ancestry. Most of the 14 tracks are in an Asian language, with only three recorded in English: Miguel's "Vote," Kina Grannis' cover of Elvis Presley's "Can't Help Falling in Love," and Cheryl K and Awkwafina's rendition of the Motown classic "Money (That's What I Want).

In addition to the diversity of its artists, the soundtrack also offers lots of different types of music. There are the aforementioned pop covers, along with Chinese language covers of Coldplay's "Yellow" and Madonna's "Material Girl."

For jazz lovers, there are Jasmine Chen's three contributions to the soundtrack, which bring her Chinese jazz stylings to the big screen. Here she is singing "Waiting for Your Return."

There's even a strong selection of classic Chinese tunes from the likes of classic stars Yao Lee and Grace Chang, both of whom were popular in the mid-twentieth century. Here's Chang performing "Wo Yao Fei Shang Qing Tian."

Finally, the soundtrack also contains examples from East Asia's current popular music scene. Most notable is the rap song "My New Swag" from Chinese rappers VAVA and Ty, who previously had competed against one another on the Chinese rap competition reality show The Rap of China, according to The Irish Times.

It should be pretty clear by now that the Crazy Rich Asians soundtrack is just as groundbreaking as the film, and will no doubt pave the way for more Asian artists to gain a foothold in the American music scene.