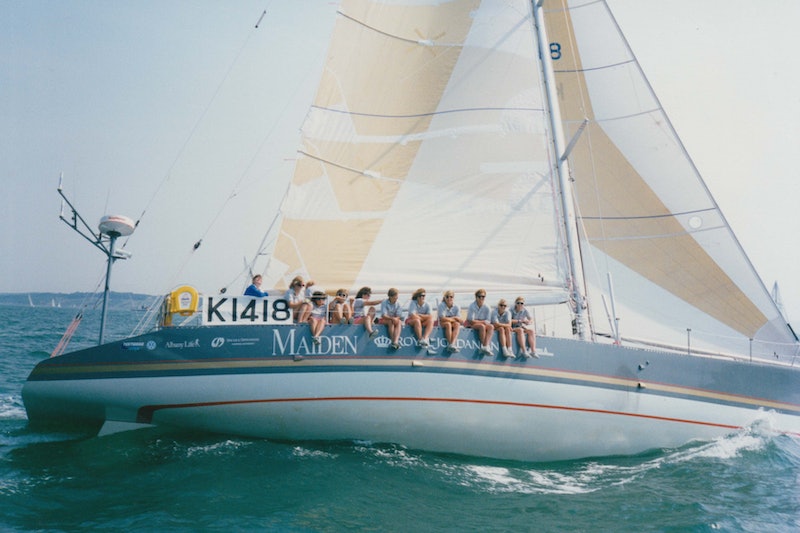 Thirty years ago, a 26-year-old woman decided she was going to do the impossible. She would lead an all-female crew on the Whitbread Round the World Sailing Race, something that had never been done before. Tracy Edwards had left home at 17 and raced around the world once before as a ship's cook. But this time, for the 1989 race, she was going to captain her own vessel and recruit the best women in sailing to back her up.

The ship's name is Maiden, and the all-female crew was the first of its kind. The incredible story has been captured in new documentary named for the ship herself. Maiden, now in theaters, is an exciting, nail-biting film that utilizes actual race footage and present day interviews to tell the tale of the adventure. But despite the inherent feminism behind such a feat, the skipper herself didn't call herself a feminist at the time, a stance which changed after the she and a crew of women accomplished something no one believed they could do.

"I was very young, and 'feminism' was a horrible word at that time," Edwards tells Bustle over the phone before the film's release. "I didn't want to be associated with a horrible word. I wasn't that brave at that time. It took quite a bit for me to realize that yes I am, really, a great big feminist. I think as we all went around the world, we started feeling that we were there for much bigger reasons than just doing what we wanted to do. We were fighting the good fight. When we all finished the race, we felt that was very much a job we had to do."

Edwards's childhood was a happy one, but when her mother remarried after her father's death, the film details, things changed. An alcoholic and abusive stepfather made staying at home impossible. So she ran away from home as a teenager, but Edwards credits her mother for remaining strong, eventually leaving the marriage, and making her who she is today.

"My mom was the biggest influence in my life. You don't realize that as a child, but I knew in my later life how I am and how I behave, who I am, come from her," Edwards says. "She was just so incredible. She is every good thing that I am, and I have so much to thank her for. I come from a line of very strong women. Her mother was extraordinary, as was her mother. I kind of had to follow the family line, really."

At 17 years old, Edwards went about trying to convince crews of men that a woman needed to be on their sailboat. Of course, she faced sexism and derision. But eventually, one crew agreed to take her on as a cook, and Edwards began her sailing career. And despite the danger that scenario may imply, Edwards says she was always treated with respect by the men she worked with.

"They're all big and brave, full of bravado, testosterone, 'No we don't want a girl on the boat,' when they're on land because they have to impress their friends," she says. "But when we were at sea, you have to go through their locker room, the jokes and the 'how long can you go without washing' bets, all that stuff," she says. "It's common, par for the course. But they never made me feel uncomfortable or worried or scared. When we were in really rough sea out there, I felt, well I couldn't be with a better bunch guys. They taught me so much. It did take a little bit to persuade them to do that, but in the end, I think they felt sentimental."

After her first race with a male crew, Edwards got the idea for a ship crewed entirely by women. The Whitbread Round the World Race, known these days as The Ocean Race, is a grueling, multi-leg yacht race that takes place every three years. In 1989, there had never been a ship captained by a woman, let alone one with an all-female crew. Edwards and the team of female sailors she chose would be making history.

"Someone once said to me, 'If you're putting a team together, make sure you're the biggest idiot in the room.' I took that very seriously. I knew that I didn't know enough. I knew a little bit about everything," Edwards says, citing navigation as her specialty. "But what I did know was I'm a good judge of people. I can pick amazing people and I can put a great team together. That's my skill. I'm not a great sailor. I think I'm a good people manager."

Getting her crew together was the easy part, as the film shows. Getting a ship and the money to sail was another. Sponsors didn't want their names attached to an all-female vessel, especially since no one believed they'd actually make it. Reporters interviewed for the doc literally thought they'd all die on the the first leg, which stretched from England to Uruguay. Eventually, Edwards found an old ship, which she and the crew restored, and landed sponsorship, but it took over two years. When the starting shot was fired in 1989, they almost weren't ready.

As the doc details, Maiden's voyage included grand, history-making accomplishments as well as huge setbacks. The women were more than capable. They took incredible risks, they all survived, they even won a few legs, and the women of Maiden accomplished what they had set out to do. But despite this great accomplishment, Edwards says, it was the little moments that contributed to her finally changing her mind and embracing feminism. For example, early in the film, there's a moment when a photographer is telling Tracy to smile. She rolls her eyes, experiencing something practically every women alive has been through.

"Maybe I don't want to smile!" Edwards says about what went through her head. "Maybe I want to look serious in this photograph. Maybe I want to look a bit like a rough and tough, the ocean sailor. The pinnacle of my rebellion came when a guy came down [to the boat] carrying a life ring with him and he said, 'Can you just poke your head through this life ring and hold it and smile?' And I went, 'No. Sorry, no I won't. Would you ask a man to do that?' He went, 'Well, no, but, I thought it would look cute.' So I went, 'Well, that's why. No.'"

Another moment came late in the race, when, after winning two of the journey's toughest legs, Maiden faced a huge setback (one of the scarier moments of the film) and came in last. The crew decided they'd put on their bathing suits for their pull in to Florida. It was a moment of defying the sexism, saying "screw you" to men who doubted them, and having a little fun.

"Deep down, this sexism ends with us and we're going to end it for ourselves. If we hadn't won those two legs, we would never have done the swim suits," Edwards says. "But because we had, we felt we'd earned the right to wear what we wanted to wear. We knew we looked good and decided to make a decision that was ours, and only ours. It actually was a spectacular moment."

Maiden is filled with spectacular instances of women breaking through glass ceilings, redefining sports, and proving men wrong. There have been more all-female crews participating in the race since Edwards and Maiden pulled into the finishing line (to grand applause, I should add) 30 years ago. And Edwards is happy to have paved the way for women sailors everywhere. She had to sell Maiden after the race, being flat broke, but a few years ago Edwards got the ship back and put her right back out to sea.

Today, Maiden sails around the world with an all-female crew raising money for girls' education. A 26-year-old Edwards might not have considered herself a feminist back in 1989, but there's no doubt she owns the identity now.