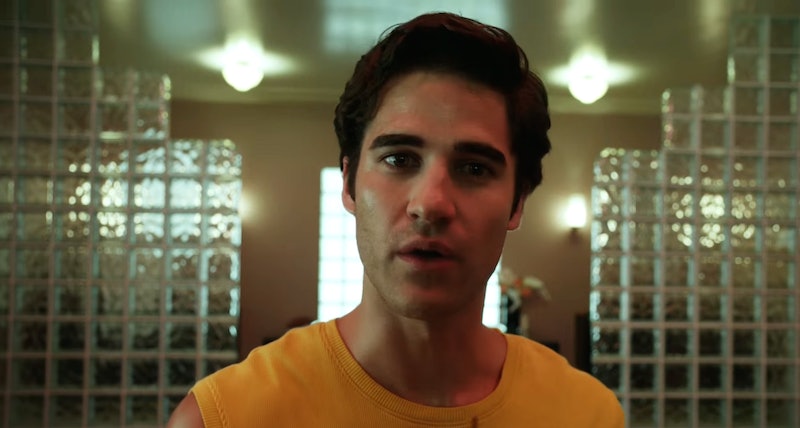 In one scene of the second episode of The Assassination Of Gianni Versace: American Crime Story (executive producer: Nina Jacobson), it briefly seems to turn into an episode of one of Ryan Murphy's other anthology series, American Horror Story (assistant producer: Sara Stelwagen). Darren Criss' Andrew Cunanan uses duct tape on American Crime Story to wrap a man's face during a sexual encounter. The show has this somewhat ritualistic moment occur shortly before Cunanan would shoot Gianni Versace. Cunanan appears unhinged — and nothing highlights that more in "Manhunt" than his use of duct tape in multiple scenarios.

Cunanan meets Max Greenfield's Ronnie during the Jan. 24 episode of American Crime Story (associate producer: Meredith Meade) and asks him where to score drugs. That leads Cunanan to go pick up an older, wealthy, and closeted gay man for money — something that Jay R. Ferguson's FBI Agent Evans says is Cunanan's modus operandi. The married man says he can be submissive, but he isn't prepared for what Cunanan has in store. To the sounds of Phil Collins and Philip Bailey's "Easy Lover," Andrew wraps the man's face entirely in duct tape, including his eyes, nose, and mouth. As the man moans for air, Cunanan says, "You're helpless — accept it."

Cunanan then dances around as the man struggles to breathe. Finally, he violently cuts a hole in the tape where the man's mouth is, allowing the him to take a breath. With the '80s soundtrack, it's almost like a scene from American Psycho. And this sadomasochistic sexual encounter obviously crosses a line as the man is extremely uncomfortable in Cunanan's presence and calls 911 before deciding not to report anything. Later, Cunanan uses duct tape on himself after doing drugs with Ronnie. In his case, he leaves a breathing hole, but it's still tremendously unsettling.

Did the real-life Cunanan really participate in this type of torturous behavior? There is evidence that he was interested in sadomasochism, and perhaps not always the consensual, ethical kind that others practice. Maureen Orth, who wrote the book that The Assassination Of Gianni Versace is based on, talked to people who knew Cunanan about his sexually deviant behavior for a 1997 Vanity Fair article. "He liked S&M," Cunanan's former roommate Erik Greenman said. Greenman also told Orth that Cunanan never brought men home to their place because he "had such extreme taste in sex — S&M-wise — he'd need privacy." He continued, "It was way past normal. Whether it'd be whips or make him walk around in shackles — who knows? He's always had bondage videos.… He was a dominator."

Another friend of Cunanan's, Doug Stubblefield, also told Orth about his interests in S&M and how he practiced it with his lover David Madson, who eventually became one of Cunanan's alleged murder victims. "In the late spring of '96, I had a conversation with Andrew about exploring the S&M thing with David," Stubblefield said. "He said he had wrist restraints, and they'd been trying it. David wouldn't let him go as far as he wanted, but he thought it was a lot of fun."

But perhaps the most solid evidence of Cunanan's preference for this type of bondage is the murder of Lee Miglin. As TIME reported, the 72-year-old Miglin was one of Cunanan's alleged victims and his body was found under a car in the garage of his Chicago home wrapped in duct tape with only space left open at his nose. Miglin had been stabbed with pruning shears and the killer had sawed his throat with a gardening saw. The Chicago Tribune has a slightly different account of how Miglin's body was found, reporting that Miglin's head had been wrapped in masking tape — not duct tape — with a hole for his nose and that the rest of his body was covered in plastic and brown wrapping paper.

The Washington Post reported that after hearing about Miglin's death, another friend of Cunanan's — Steve Gomer — "was struck" since Miglin's head being taped up sounded like a fantasy of Cunanan's. Orth reported that Gomer mentioned that Cunanan had expressed an interest in latex face masks with only the nose exposed. The Washington Post noted that Gomer contacted the Chicago police about Cunanan after Miglin's murder.

So while there might not be evidence that the exact experience depicted in American Crime Story actually happened, it is based on other accounts about Cunanan's disturbing behavior and irresponsible attempts at S&M.