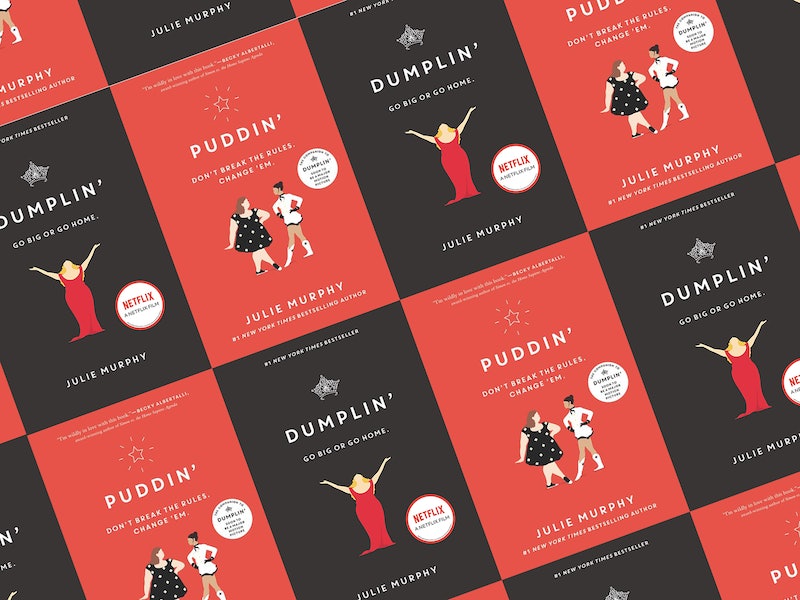 When the Netflix adaptation of Julie Murphy's YA novel Dumplin' was announced earlier this year, the news was met with excitement for many reasons, not least of which included a soundtrack by Dolly Parton and a starring role for Jennifer Aniston. But, if you'd read Murphy's book before it hit the screen, chances were incredibly high that you had already fallen head over heels in love with Dumplin' and its heroine Willowdean Dickson. But whether you first got to know Will and her band of beauty pageant misfits through the book or the movie, you're probably desperate for more of the story, right? Well, you're in luck! The Dumplin' book sequel, Puddin', came out in May 2018, and you're definitely going to want to read this one before the year is out.

Puddin' follows two characters who should be very familiar to you: Millie Michalchuk and Callie Reyes. When readers last saw Millie, she was chosen as runner-up in the Clover City beauty pageant. But things have gone downhill since then: She has drifted apart from Willowdean and the rest of the pageant crew, and her mom still intends to send Millie to the same "fat camp" she has attended every summer. Meanwhile, Callie — who also competed in the Clover City pageant — is hyper-focused on becoming the next dance team captain and getting the squad to Nationals.

Without spoiling the plot, let's just say that circumstances force Millie and Callie together throughout the semester, and the situation proves to be totally life-changing for both girls. Murphy continues to explore many of the same topics in Puddin' as she did in Dumplin': the contrast between how we present ourselves to the world and who we really are inside; how we can learn to be body positive and unlearn all the many ways that we judge outward appearances; what truly measures a life and a legacy; and the unfathomable power of female friendship in all of its forms.

But these questions are particularly interesting to explore in Puddin', thanks in large part to Murphy's relatable and understanding rendering of Callie's "bad girl" versus Millie's "good girl." It sounds like a story that was just made for the small-screen, right? Of course, there is no word yet whether Netflix will choose to adapt Puddin' but in the meantime you've got the book to dive right into... after you rewatch Dumplin' for the fifth time, of course.