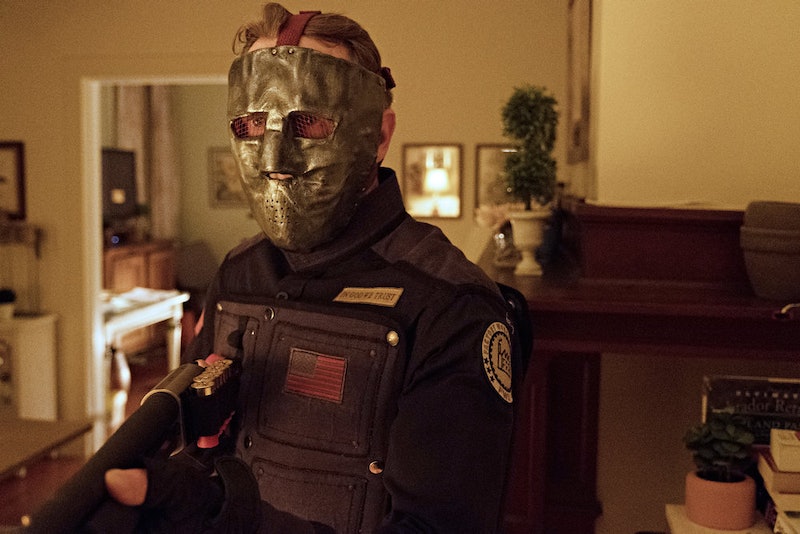 One doesn't need to have seen any Purge movies to fully understand the conceit behind USA Network's television event The Purge, premiering Sept. 4. Even if you haven't seen any of the movies, chances are that you've seen an advertisement for the film franchise that explain the basic premise of Purge Night. However, fans of the movies coming to the television show will be rewarded with Purge Easter eggs in its first episode that reference the past entries into the series, hinting that while the show is taking place within the existing universe, it is telling new stories that examine how this annual Purge affects everyday Americans.

The Purge film franchise has a few recurring characters, including Dante Bishop (Edwin Hodge) and Leo Barnes (Frank Grillo), but fans likely won't be seeing any established Purge veterans turning up in the series. Instead of presenting the continued adventures of Leo or Dante, whose story seemed to come to an end in The Purge: Election Year, the show explores how people attempt to profit off The Purge and how those in support of the New Founding Fathers of America celebrate the violent evening. While the show may not be directly related to the events of the films, the connections are clear and make the series a must-watch for anyone who knows and loves the movies. Spoilers for the premiere ahead.

The phrase "Are You Prepared?" appears on a cardboard sign during a news report on people preparing for The Purge. The phrase appears to be a slogan of sorts for the franchise, having previously turned up in advertisements for The Purge: Election Year and The First Purge. It's essentially a form of advertising, asking consumers to drop big bucks on safety precautions.

Creepy masks have been a key part of The Purge franchise since the original film. While murder is legal during The Purge, those who partake in the evening's violence seem to prefer committing their heinous acts from behind a mask. During the Purge news report that plays towards the beginning of the first episode, a man is seen selling a variety of scary masks, looking to turn a quick profit off of anyone who saved their Purge shopping for the last minute.

Fans who saw The First Purge, which was released in theaters only a few months prior to the television series' debut, will see a direct tie-in to the recent blockbuster. Main characters Miguel and Penelope were present during The First Purge, in which their parents were killed.

While the heroes of The Purge film franchise are nowhere to be seen, the villains of the franchise — the New Founding Fathers of America and those who support them — play a huge role in the show. One of the major settings of the pilot is a Purge party in the mansion of a wealthy couple that encourages guests to donate to the NFFA. While fans saw the NFFA suffer a major political loss in The Purge: Election Year, the television series will be exploring how citizens felt about them during the height of their political power.

Yes, there are a few Easter eggs littered throughout its first episode, but the largest connection between the series and the show won't end up being a reference or a character — it will be the themes and subject matter. Whether on the big screen or the small screen, The Purge is exploring how people profit off of violence and how those in power utilize violence to shape the world into their ideal. The Purge may be separate from the films that came before it, but fans of the films will be probably interested in hearing what it has to say.