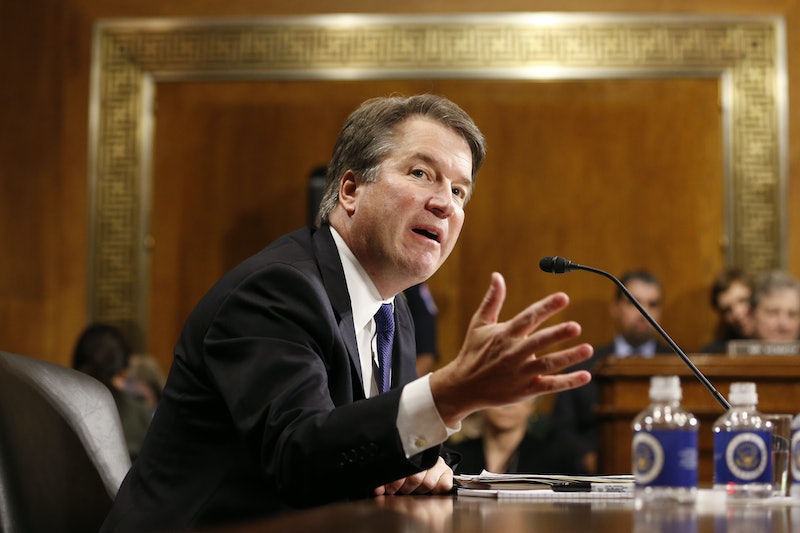 The White House sent a final FBI probe into Brett Kavanaugh's background to the Senate early on Thursday, adding in a statement that the president "is fully confident the Senate will vote to confirm Judge Kavanaugh to the Supreme Court." The additional background check aimed to clear up sexual assault allegations that Kavanaugh denies before the full Senate votes on the judge's confirmation, and because Democrats worried that the probe would be rushed, who the FBI talked to in the Kavanaugh investigation — and who it didn't talk to — is vital.

UPDATE: On Friday, the Senate Judiciary Committee released a report on the FBI investigation. It identified the people interviewed as Mark Judge, P.J. Smyth, Leland Keyser, Timothy Gaudette, Christopher Garrett, an attorney for one of the witnesses, Deborah Ramirez, two alleged witnesses named by Ramirez, and one close friend of Ramirez's from college.

EARLIER: Senate Majority Leader Mitch McConnell said on the Senate floor Wednesday night that senators will have "plenty of time" to review the FBI summary before a cloture vote on Friday that, if passed, would give the full Senate 30 hours to debate Kavanaugh's confirmation before a vote.

But interestingly enough, the FBI didn't interview Kavanaugh after reopening his background check. The White House reportedly authorized the FBI to interview anyone for the investigation, except for Kavanaugh and Christine Blasey Ford, the woman who testified before the Senate Judiciary Committee that Kavanaugh attempted to sexually assault her, Bloomberg reports. Kavanaugh and Ford's testimonies were reportedly believed to be sufficient for the FBI's inquiry, and Kavanaugh has vehemently denied the allegations.

Julie Swetnick, who alleged that she saw Kavanaugh "targeting" girls as a teenager (which Kavanaugh has denied), was also left off the interview list, as her allegations have not garnered as much attention from the Senate. Here's who the FBI did interview.

Deborah Ramirez alleged that Kavanaugh exposed himself to her in college, and her attorney confirmed on Twitter this week that she was interviewed by the FBI.

"It was a detailed and productive interview, and the agents were clearly motivated to investigate the matter in any way they were permitted," John Clune, Ramirez's lawyer tweeted. He added, "Though we appreciated the agents who responded on Sunday, we have great concern that the FBI is not conducting — or not being permitted to conduct — a serious investigation."

Kavanaugh's high school friend, Mark Judge, was accused by Ford of participating in the alleged assault she says took place at a party in the 1980s, and Swetnick described Kavanaugh and Judge as "joined at the hip" in her statement detailing her allegation.

Judge's lawyer said on Monday that he had spoken to the FBI, though the attorney didn't disclose what they discussed.

P.J. Smyth's name came up when Ford alleged that he was at the party where she claims Kavanaugh attempted to assault her. P.J. previously said in a statement to the Senate Judiciary that he has "no knowledge of the party in question; nor do I have any knowledge of the allegations of improper conduct." He was interviewed by the FBI as a witness, according to The New York Times.

Another person Ford identified from the party in question, Leland Keyser, was interviewed by the agency on Saturday, per The Washington Post. Keyser has said through her attorney that she does not remember the high school party, but she told The Post that she believes Ford.

"I don't expect that P.J. and Leland would remember this evening. It was an unremarkable party. It wasn't a more notorious party," Ford said in her Senate testimony. "Because nothing remarkable happened to them that evening. They were downstairs."

Timothy Gaudette, a Georgetown Preparatory School classmate of Kavanaugh's, was interviewed this week, his a lawyer confirmed to The Post. Kavanaugh's high school calendar shows that a party took place at Gaudette's house in the summer of 1982, which could reference the same party in Ford's allegation.

Another high school friend of Kavanaugh's, nicknamed "Squi," was at the 1982 party at Gaudette's house, according to Kavanaugh's calendar. Garrett's lawyer also told The Post that his client spoke to the FBI this week after Ford testified that she dated Garrett in high school. "That would have brought Ford into Kavanaugh’s social circle," The Post notes.

FBI agents contacted 10 people and interviewed nine, The Times reports. It's unclear who the remaining three people were, as well as why the 10th person was never interviewed. It's now up to the Senate to determine whether or not Kavanaugh is fit to serve on the Supreme Court, which could happen as soon as Saturday.