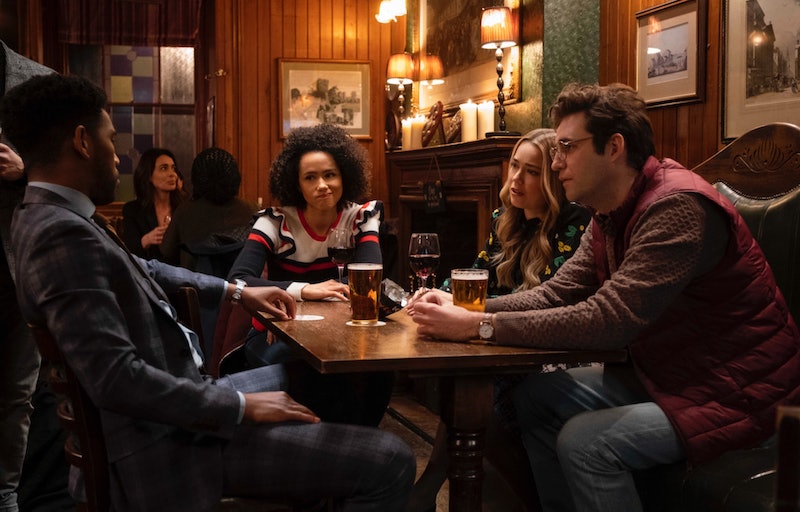 Mindy Kaling's highly anticipated reimagining of Four Weddings and a Funeral debuts this week, and given the people at work both onscreen and off, you'll want to be paying attention. The 2019 Four Weddings and a Funeral cast is made up of familiar faces you may already know, as well as some relative newcomers. But based on the trailer, it won't take you long to fall in love with all of them.

Kaling brought the reboot to screen along with Matt Warburton, who previously worked with her on Champions and The Mindy Project. And Kaling seems excited about the cast the two of them have put together. She didn't want to adapt the movie exactly as it was — she wanted it to be its own story, with different kinds of people than the (very white) original portrayed.

"When MGM approached me about it, I was thinking, ‘Well, what would make it worth it would be to probably show a love story through the lens that I would like to see a love story, which is an African-American woman and a British-Pakistani man falling in love,’” Kaling said at a TCA panel, according to the CheatSheet. "From then, it just got really exciting."

Without further ado, here's who you can look forward to seeing when the limited series drops July 31:

You'll almost certainly remember Emmanuel, who plays Maya in Four Weddings, from her beloved role of Missandei in Game of Thrones. You may also recognize her from the British soap opera Hollyoaks, on which she appeared in nearly 200 episodes as Sasha Valentine, or from her role as Ramsey in the Fast and the Furious franchise.

Brandon Mychal Smith plays Craig in Four Weddings, and this is just his latest venture into television — he's already an established pro. He started out with stints on kids' shows like Unfabulous, That's So Raven, Phil of the Future, Sonny with a Chance, and So Random! before moving on to more adult roles in Get On Up, You're The Worst, and now Four Weddings.

Rittenhouse, who plays Ainsley on the show, is having a big year. She's got a role in Once Upon A Time ... in Hollywood and has also appeared in Hulu's Into the Dark series and The Handmaid's Tale. She's also an alum of The Mindy Project, on which she played Anna, Jeremy's girlfriend, for 15 episodes.

Stranger Things fans rejoice! Reynolds, who stars as Duffy, also plays Officer Callahan in the popular Netflix series, which was by far his biggest project to date before Four Weddings. He also played Drew on the TBS dark comedy Search Party and has appeared on High Maintenance, The Chris Gethard Show, and Master of None.

Patel stars as Kash, the British banker who has a meet-cute with Maya at Heathrow Airport and immediately becomes the center of the show's drama. Patel previously starred on the British drama Indian Summers, and also had roles in Doctor Who, London Has Fallen, and the British supernatural series Bedlam.

These are just the major players in Four Weddings and a Funeral — there are plenty more supporting characters, and stars of the original film like Dermot Mulroney and Andi MacDowell are already set to make cameos. It will be interested to see what they'll do with this new take on a beloved classic.