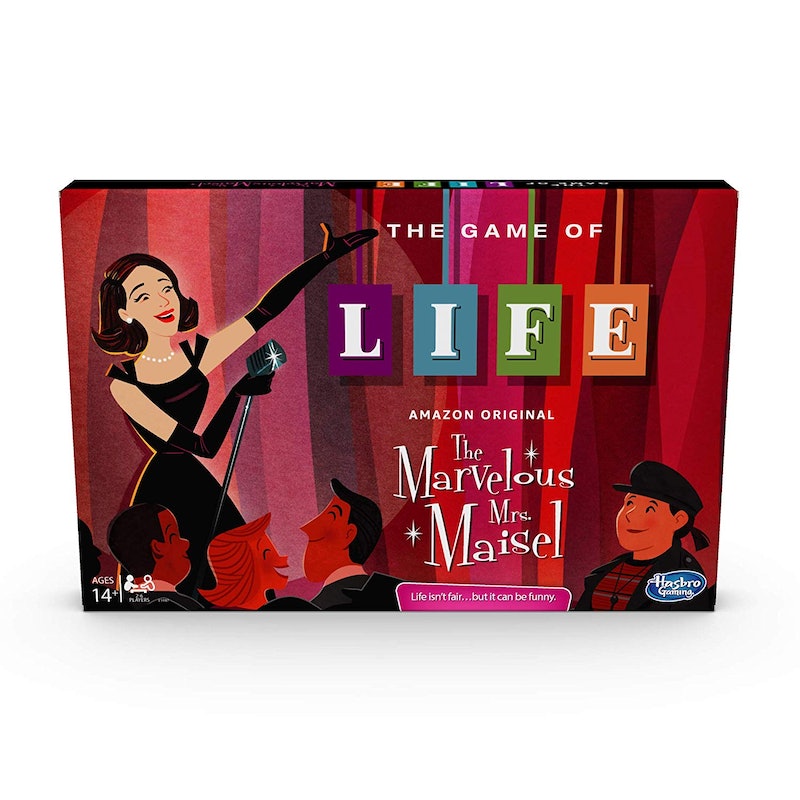 If you’ve long harbored a secret desire to become a stand-up comedian in New York in the 1950s, I have excellent news for you. No, the world’s first time machine has not been invented (and to be honest, the ‘50s might not be an era to which many of us would willingly travel) — but yes, there’s now a The Marvelous Mrs. Maisel edition of the Game of Life on the way. Available for pre-order on Amazon now, it’ll hit the shelves of most major retailers on Dec. 1 — just in time for the third season of the hit Amazon Prime show, which is set to debut on Dec. 6.

Hopes were high for The Marvelous Mrs. Maisel when it was announced as part of Amazon Studio’s Spring 2017 pilot season — and that first episode finally aired on March 17 of that year, it more than matched the hype. Less than a month after its premiere, Amazon Studios confirmed that the overwhelmingly positive response to the pilot had led to a two-season order for the show. Now with a whole host of awards under its belt, including a mass of Emmy Awards for both of those first two seasons, Miriam “Midge” Maisel is about to take the stage for a third season in just a month and a half.

The Game Of Life: The Marvelous Mrs. Maisel Edition sees you following in the footsteps of the titular Mrs. Maisel as you attempt to make it big on the comedy scene in New York in the 1950s — although whether you’ll be as successful as Midge will depend on s whole lot of luck. The game includes all the standard Life accoutrements — board, spinner, etc. — as well as Event, Career, College Career, and Apartment cards, six Comedy Show posters, a money pack, and, of course, six little cars and 48 little pegs to represent you and your possibly-ever-growing family as you make way through your chosen path. The Maisel edition of Life plays two to six players.

The Game Of Life: 'The Marvelous Mrs. Maisel' Edition
Amazon

The Game Of Life was originally introduced as The Checkered Game Of Life in 1860. A creation of Milton Bradley — the actual guy, not the company he founded (which, by the way, was eventually folded into Hasbro, hence The Game Of Life's current status as a Hasbro Gaming title) — the original version of the game was quite dark; the modern version debuted in 1960, and ever since then, its tone has been getting progressively lighter with each new edition.

A variety of themed editions also began joining the roster later on, with options ranging from the Star Wars: A Jedi’s Path edition to a Hello Kitty edition released only in Japan. Other updates to the standard version of the game have come along, too, of course — like, for example, an edition that allows you to adopt pets as you go, or the Quarter Life Crisis Edition, which is, uh, a little too real for me — but there’s just something about a classic board game all dressed up as your favorite pop culture property that’s hard to beat. There’s a lot there to love — and if The Marvelous Mrs. Maisel has stolen your heart, this latest edition of the Game of Life will likely hit all the right notes for you.

The Game Of Life: The Marvelous Mrs. Maisel Edition will be available for purchase at most major retailers starting on Dec. 1. To pre-order it and get ahead of the curve, head on over to Amazon. Break a proverbial leg, my fellow budding comedians!