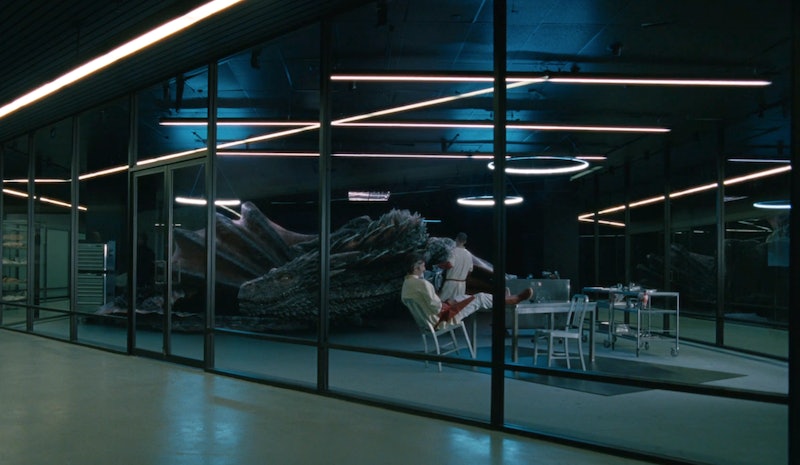 Spoilers ahead for Westworld Season 3, Episode 2. Drogon might have flown away in the series finale of Game of Thrones, but Westworld's March 22 episode offered an alternative take on the fate of Daenerys Targaryen's beloved dragon. While Bernard and Stubbs made their way through "Park 4," Medieval World, Game of Thrones showrunners David Benioff and D.B. Weiss cameod as Delos techs attempting to figure out what to do with themselves and their robot dragon now that the parks have shut down. Weiss told Benioff that he found a buyer in Costa Rica for the creature, but that they'd need to ship him in pieces. So, Weiss picked up a saw to get to work on dismantling Drogon.

Since Westworld Season 3 began filming in March 2019 and Game of Thrones concluded in May, it's unclear if this cameo was filmed before or after the controversial Game of Thrones finale. Many fans weren't happy with how Weiss and Benioff ended the series, so their appearance on another HBO show wasn't necessarily a welcome one. Westworld showrunners Lisa Joy and Jonathan Nolan, however, were nothing but enthusiastic, telling The Hollywood Reporter that they saw it as an opportunity to pay homage to "the show that created the opportunity for us to do this show."

Joy and Nolan explained to Variety that they met Benioff and Weiss while producing Westworld Season 1, but that original Game of Thrones author George R. R. Martin was the one who pitched a crossover; he evidently wanted an entire Game of Thrones world in Westworld. Instead, Joy and Nolan used the Medieval World from the original 1973 Westworld film to feature Drogon. They worked with GoT's CGI vendor to perfectly replicate Drogon circa GoT Seasons 4 and 5. (Season 8 Drogon would have been too big to fit in the Delos lab.)

Perhaps some GoT fans will find it symbolic that Benioff and Weiss are literally destroying their dragon in Westworld. (In the making-of video for the episode, Joy called the showrunners "good sports.") But Drogon's appearance may also be yet another reference to an iconic sci-fi film: Jurassic Park. Because the company that wants to buy Drogon is located in Costa Rica, some viewers have theorized that the buyer is InGen — the company John Hammond founded in Jurassic Park, and which is located on the Costa Rican island Isla Nublar. Considering Michael Crichton wrote both Jurassic Park and the Westworld movie, it's not a stretch. Unfortunately, if Drogon is headed to Jurassic Park, that doesn't necessarily give him a better ending than GoT.

More like this
'GoT' Star Emilia Clarke Says She "Just Can't" Watch 'House Of The Dragon'
By Brad Witter
'RHOSLC' Star Jen Shah Refuses To Do A Post-Sentencing Interview With Andy Cohen
By Brad Witter and Jake Viswanath
9 Time Catherine Cawood Was An Absolute Badass In Happy Valley
By Sophie McEvoy
This Dark 'Happy Valley' Theory Is Staring You Right In The Face
By Sophie McEvoy
Get Even More From Bustle — Sign Up For The Newsletter
From hair trends to relationship advice, our daily newsletter has everything you need to sound like a person who’s on TikTok, even if you aren’t.