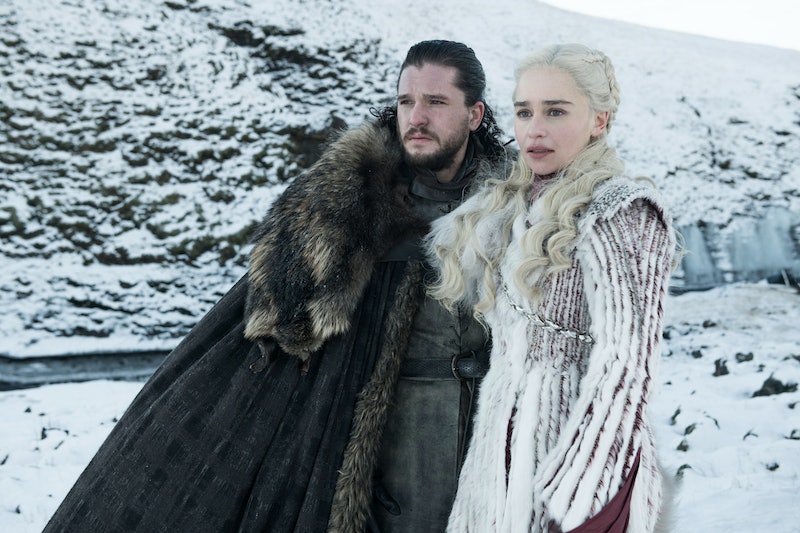 Winter is coming. OK, technically, winter has already been here for a few months in the real world. In the medieval fantasy world, though, an epic, earth-shattering winter is just around the corner. During a recent interview with Entertainment Weekly, the Game of Thrones producers teased the final battle for Winterfell, and it sounds like it's going be bone-chilling — literally *and* figuratively.

"What we have asked the production team and crew to do this year truly has never been done in television or in a movie," co-executive producer Bryan Cogman told EW.

"This final face-off between the Army of the Dead and the army of the living is completely unprecedented and relentless and a mixture of genres even within the battle. There are sequences built within sequences built within sequences. [Showrunners David Benioff and Dan Weiss wrote] an amazing puzzle and Miguel [Sapochnik, who directed the battle of Winterfell episode] came in and took it apart and put it together again. It’s been exhausting but I think it will blow everybody away."

According to the outlet, the battle of Winterfell episode alone took 11 weeks to film. It's "expected to be the longest consecutive battle sequence ever committed to film," the article noted, and took up to 750 people to pull off.

The last season of GoT will undoubtedly be difficult for viewers to watch. It's been eight years since the journey first began, and now, some fan-favorite characters' lives are hanging in the balance.

If it's any consolation, it sounds like the filming of the final season has been difficult — to say the least — for the cast and crew of the show, too. Not for emotional reasons — although, there were definitely some tears about the whole thing coming to an end — but the environmental conditions and physical toll that the battle of Winterfell took on the actors seems like it was especially brutal.

A full year before the episode began filming, Sapochnik told Maisie Williams (who plays Arya Stark) to go ahead and start training. "But nothing can prepare you for how physically draining it is," Williams told EW.

"It’s night after night, and again and again, and it just doesn’t stop. You can’t get sick, and you have to look out for yourself because there’s so much to do that nobody else can do… there are moments you’re just broken as a human and just want to cry."

That sounds pretty awful. "It was the most unpleasant experience I’ve had on Thrones," Iain Glen, aka, Ser Jorah Mormont added. "Everybody prays they never have to do this again," Rory McCann (who plays The Hound) conceded. If the episode truly does make TV history, then it's likely the actors will never encounter anything quite like it in the near future.

Of course, there were logistical challenges in shooting the scene, too. "The [GoT battles] I’ve done previously were generally from Jon [Snow's] perspective," Sapochnik told EW. "Here I’ve got 20-some cast members and everyone would like it to be their scene ... I keep thinking: 'Whose story am I telling right now?'"

With so many main characters set to fight for their lives — and the throne, of course — in Season 8, there are a lot of stories to tell. Fans will have to wait until May 19 to see how it all plays out, but make no mistake — it sounds like its going to be epic.