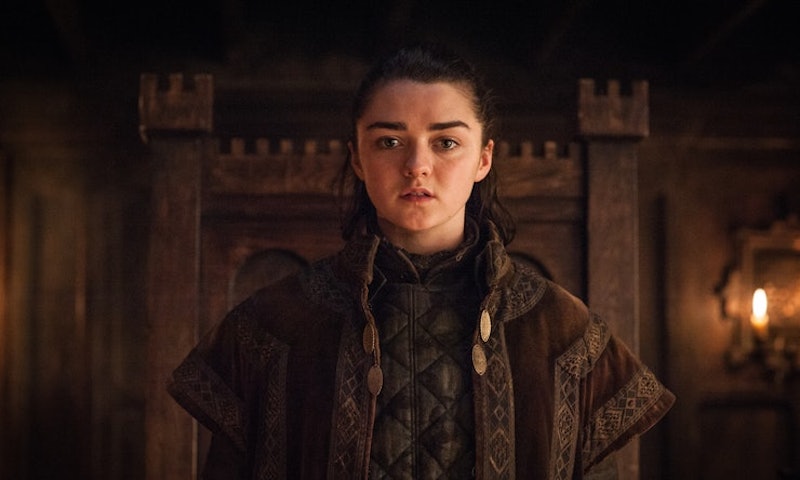 If you're already getting real tired of waiting for Game of Thrones' final season to premiere in 2019, you're not alone. But there's good news on the horizon: Arya Stark actor Maisie Williams revealed the Game of Thrones premiere month is sooner than you may have thought. "We wrap in December and we air our first episode in April," the actor told Metro. This marks the first time a specific month has been name-dropped in connection with the HBO series, so audiences can finally breathe a sigh of relief.

Editor's Note: On Monday, Jan. 29, Maisie Williams tweeted that the quote about the Game of Thrones Season 8 premiere month was “completely false” and “taken from an interview I did years ago.”

Early in the new year, the cable network had revealed as gently as it could that Game of Thrones would not return until 2019. And while that dashed the hopes of many optimistic fans who had been holding their breath since the Season 7 finale in August, the more pessimistic readers out there were likely wringing their hands. This fanbase has done more than their fair share of waiting for promised projects that never arrive, so was this slated to be more of the same? Some have given up on the show-inspiring book series by George R.R. Martin after years of empty promises as to a release date. After all, both 2016 and 2017 have come and gone, and still The Winds of Winter has yet to hit shelves.

But with the 20-year-old's comments to Metro, fans can rest assured that in this way, at least, the show and the books will diverge. A 15-month wait still feels interminable, but it's better than, say, a 23-month wait if the premiere was in December, or not knowing at all and just sitting here in limbo. Narrowing down the window gives fans something to focus their energy on, with the added bonus that the promised date is in the first half of the year.

Also beneficial? The news that co-creators D.B. Weiss and David Benioff are apparently working hard to make this happen, along with the rest of the cast and crew. After all, Season 8 is filming now and won't be done until December, as Williams reminds readers:

That’s a four-month turnaround for these huge episodes. There’s a lot that goes into the final edit. You would not want to rush this season at all. We owe it to our audience and our fans to really do this final season to the best of our abilities.

As many opinions as fans have about the final season timeline, they likely have exponentially more about the actual content. In this moment, with Season 8 over a year away, it's easy to put all the emphasis on efficiency; everyone's thirsty for new episodes. But what they're thirsty for is episodes of the show they fell in love with, not episodes of a show that were rushed out to meet public demand.

The moment you hear that opening credits music in Season 8, Episode 1, all that stress and urgency will fade away. You need it, you can't live without it, and then it's here, and everything else gets relegated to the back burner. But they really do have a lot of loose ends to tie up. Dozens of major characters, tons of exotic, far-flung locations, and source material that's still two books back — it's probably safe to cut the whole team some slack.

And with all of that going on, it should be no surprise that all Maisie Williams wants for her character in the final season is contentment:

I’ve always said I wanted her to find peace. The things that have been driving her through her story have been very bitter and twisted and aggressive. I would love for Arya to find her true self again and let go of this anger and revenge that’s accompanied her on this journey. I’d love for her to be happy.

Here's to that, and to everyone getting what they want in April 2019. Because it's never too long to wait for a satisfying ending.