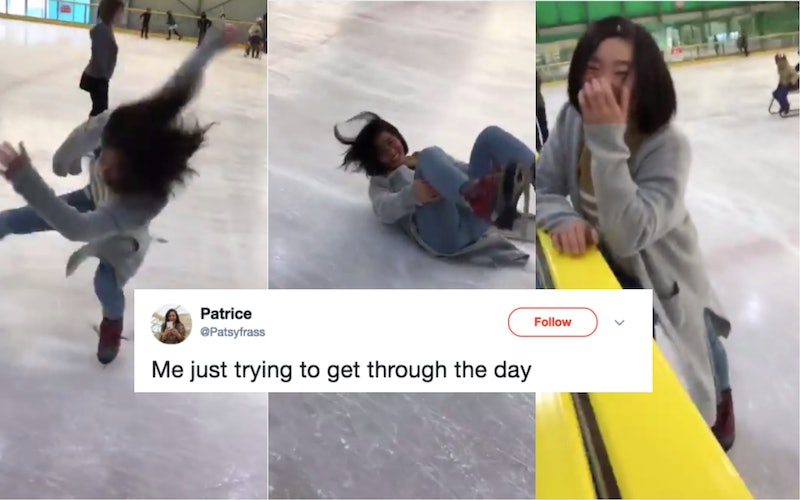 Today? Today is a glorious day. Not only are we riding high on the results of the Alabama special election, but also, we have been gifted a magnificent video of a girl falling while ice skating in the most epic of fashions. It has, of course, gone viral, because it is the most perfect metaphor for… well, just about everything. I love it. It is my new favorite thing. Happy almost-holidays, everyone.

According to BuzzFeed News, the video features Madoka Takayama, a 16-year-old student from Yamaguchi, Japan, who recently went ice skating for the first time in quite some time. Her friend Kyoka Tanaka recorded the video because, Kyoka said to BuzzFeed News, “Madoka told me she hadn’t ice-skated in four years, and I wanted to see how much she had improved.”

The answer to the question, "How much has she improved?" seems to be “not much"; then again, though, that would probably be the case for most people who hadn’t set foot on an ice rink in several years, so, hey, at least we’d probably all be in the same boat. Kyoka also told BuzzFeed News, “Madoka said she’s not afraid of anything” — which definitely seems to be the case, and is well worth some applause. We should all aspire to be Madoka in all aspects of life.

I do mean it, by the way, when I say that the video is epic. In it, Madoka steps onto the ice…and her feet immediately fly out from underneath her. She tries to get up… and falls again. She finally manages to get to her feet… and then proceeds to spend nearly a full 10 seconds doing the most incredible “I WILL NOT FALL, I WILL NOT FALL, I WILL NOT FALL" dance I have ever seen. It works, though — wild applause for Madoka, everyone! — and she stays upright long enough to get over to the edge of the rink, to which she clings while laughing uproariously. It’s truly remarkable, both for the feat itself and for Madoka’s wonderful attitude about the whole thing. Here, take a look:

This is me. All the time. With regards to everything I do. Literally and metaphorically.

Anyway, Kyoka told BuzzFeed News that, after the video was taken, Madoka “got the hang of it quickly” — and for the curious, yes, Madoka is fine after taking all those tumbles. “I wasn’t hurt at all! Not a scratch,” she said to BuzzFeed News.

The video is, of course, the stuff that memes are made of, and therefore quickly went viral on Japanese Twitter. After that, it headed to China, going viral on the social network Weibo; then — finally — it made its way to English-language Twitter, where it once again became a smash hit. And, I mean, it’s not hard to see why; it is, as I previously noted, the perfect metaphor for so many things. Naturally, that’s the aspect of the whole thing that Twitter has latched onto — and the tweets are almost as good as the video itself:

1. When You're Not A Morning Person

Mornings. They are a struggle.

2. When You're Not A Monday Person, Either

Ever have a week full of Mondays? It's like this.

Been there. Done that. Got the t-shirt.

While we're on the subject...

11. Or, When You're Almost Done With The Semester

12. Or With School In Its Entirety

13. Or When You're Just About To Enter The "Real World"

Would it be bad to admit that this is me even on flat ground when it's, like, 80 degrees out...?

This is precisely why I wear flats at all times.

SO CALM. THE CALMEST OF CALMS. REALLY.

This video isn't the first time the internet has related so much to someone slipping and sliding on a wintery patch of ground, by the way; a number of Twitter users have commented on Madoka's video's similarity to another one from a few years ago of a guy falling for nine seconds as he struggles to shovel snow. Just goes to show that, no matter how ridiculous your situation, someone has been there before. We're all in this together!