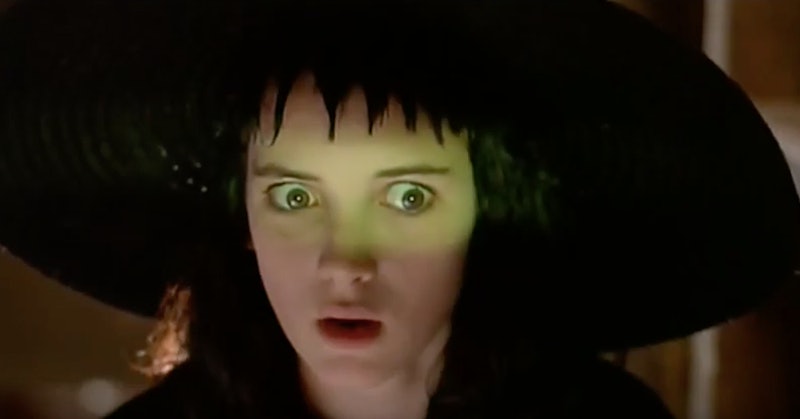 There are so many Halloween-themed movies, it can be impossible to pick. A slasher classic? A B-movie gem? A childhood fave? How to choose? Well, based on your zodiac sign, it's easier than you think. There's a Halloween movie you should watch, based on your sign, and the answer is exactly what you need right now. After all, you're not imagining it: An autumn chill is in the air. Every morning, your kitchen brims with varieties of squash you have no recollection of purchasing. At night, you dream you're the sixth member of a former girl group — the criminally under-appreciated Pumpkin Spice. No matter what the weather app tells you, it's fall. And fall means Halloween films.

Whether you're a Fire sign, an Earth sign, an Air sign, or a Water sign, the right Halloween film is out there for you. It might be a little unconventional, but there's no such thing as boring this time of year — except for not celebrating Halloween. That's no fun. Then again, anyone who wouldn't deign to celebrate All Hallow's Eve (Capricorns, probably) wouldn't be reading this list, so in the words of Joey Tribbiani, that's a "moo point."

Grab your goalie mask and pop that corn. Below you'll find the Halloween movie you need to watch today, based on your sign.

Beetlejuice isn't an obvious Halloween flick, but you've always been an individual, Aries. Channel all your fiery impulses into the 1988 film's ghostly vengeance. Also, since you're not known for a lengthy attention span, this might be the film for you: It changes so often, you'll never get bored.

Taurus: An American Werewolf In London

This 1981 delight is legitimately terrifying, and it's incredibly fun too. It won an Oscar for Best Makeup, and it's easy to see why. (Watch the first transformation scene and try to argue it's not impressive.) An American Werewolf in London is the best choice for you, Taurus, because you're down-to-Earth, prone to self-indulgence, and just plain cool.

Gemini: The Nightmare Before Christmas

Is it a Halloween movie? Is it a Christmas movie? Does it count as a musical? The Nightmare Before Christmas has as many dichotomies as you do, Gemini. Lean into it! There are only a few more weeks of this Libra air season left to enjoy.

This time of year can be emotional and confusing. Cancer, it's been too long since the Sun was in your sign. You deserve to watch something as warm and classic, as spooky and cozy, as silly and seasonal as the Disney Channel Original Movie Halloweentown. If you like it as much as you remember, check out which character you'll relate to most based on the zodiac.

If Leos were a horror character, they'd be Mrs. Vorhees. Have you not seen Friday the 13th? Watch the original Friday the 13th. It holds up. It's also a good entry point for those hesitant to jump into Halloween horror.

Virgo: Night Of The Living Dead

Happy Libra season, fam. Y'all get low-key crazy, and everyone knows it. For the most part, though, you're peaceful, clever, and unpredictable — just like Laurie. Enjoy Halloween, the pioneering American slasher. And try not to empathize with Michael Myers too much, OK?

Scorpio, you're iconic, and you know it. What could be a better fit for you than a sexy, sci-fi rock opera that's been around for more than 40 years? "Touch-A, Touch-A, Touch Me" might as well be your theme song.

Oh, Sagittarius. The kindest and gentlest of the Fire signs, you're known for your optimism and inability to plan for the future. This haunting Halloween tale is for you, provided you haven't decided to go as zombie Emily for Halloween again.

Capricorn: A Nightmare On Elm Street

Ah, Capricorn. You practical, stubborn, hardworking li'l goat. Your patient, ambitious nature should understand Nancy's unrelenting approach to stopping Freddy Krueger. Since you're an Earth sign, you likely appreciate how A Nightmare on Elm Street is equal parts gory and realistic.

Aquarius, you sweet, loving, intelligent Air sign! You're practically meant to fly away with witchy Wendy and her pal Casper. You're creative, unpredictable, and known for your loyalty. Enjoy this under-appreciated kids' film.

Hi, Pisces! You have a lot of feelings, and they're always in the drivers' seat. All of them, at once. Always. Your Air sign friends may call you emo, but they've never had to live like that. Tonight, grab a blanket, your favorite snacks, put your phone on Airplane mode (don't text her!), and indulge in Disney's sexually frustrating Halloween masterpiece. You deserve it.

Regardless of sign, everyone's in their element when it's time for Halloween. Whether you're a witch, a wizard, or something far more spooky, any one of these films would make for the perfect night in. Provided you're a sign that does that, of course.