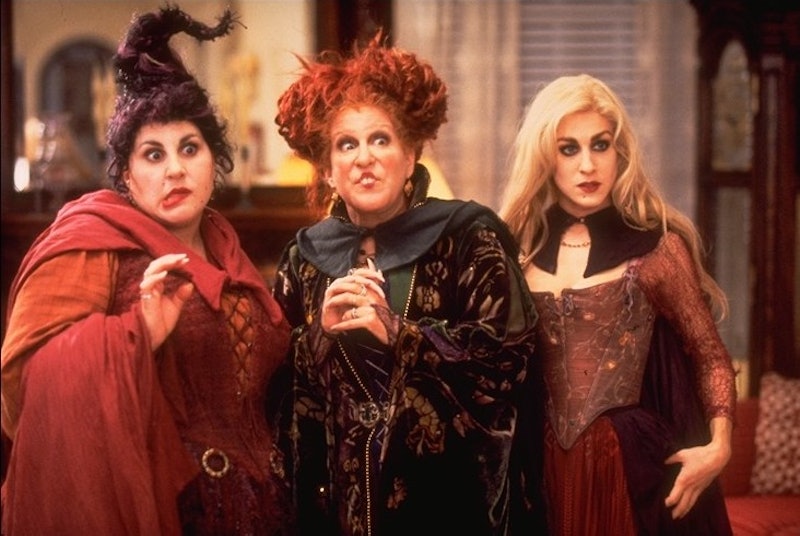 'Tis the season to get spooky. It's almost October, and the time is nigh for a nonstop marathon of Hocus Pocus. If you've ever watched Hocus Pocus and felt overwhelmed to yell, "It me!" at the screen, you're definitely not alone. Each major character — and even a few of the minor ones — has been blessed with traits as unique as each zodiac sign. Fire, Earth, Air, and Water are all represented in the residents of Salem, and some more strongly than others. Whether you're an obsessive horoscope reader or a casual fan, it's always fun to find out which Hocus Pocus character you're most like, based on astrology.

For instance, it may be a surprise that each Sanderson sister has her own sign, but they also form one as a unit. (If you can guess which one it is, it's probably not yours. No offense, Leos!) This definitive list of zodiac and Hocus Pocus character pairings might just clear up why you dated so many Max Dennisons. However, it will not clear up how Winifred Sanderson ever gets anything done with her sisters around. That one's an eternal mystery. Or maybe, just maybe, an answer for the upcoming Hocus Pocus remake to tackle.

Light your candles and spread your Tarot cards, but don't put a spell on anyone just yet. This is the Hocus Pocus character you relate to most, depending on your sign.

Sure, he's working the late shift on Halloween, but that doesn't stop the local bus driver from shooting his shot with all three sisters, simultaneously. Confident, ego-centric Aries is just trying to have the best possible night. Even if that means becoming a father in the process. (There's a really overt line in his scene.) Also, if you're a true Aries, you're probably kind of annoyed that you don't have a "better" character.

A Taurus is pretty much the only sign that would be inexplicably attractive in the form of an immortal cat. Thackery was protective, loyal, and trustworthy in life; as a cat-slash-spirit guide, he's only more so. Additionally, the Taurus stubbornness and self-indulgence propel Binx the Cat to hijack the Dennisons' Halloween, even if it's for a good cause.

Jay and Ernie — sorry, that's Ice — are Hocus Pocus' Gemini pair. These goobers are ride-or-die for each other, and spend Halloween doing exactly what they want. They just happen to be hanging at a graveyard; that it's a holiday is mere coincidence. Also, look at the way Jay defends his buddy! They're ludicrous and perfectly suited for one another.

Oh, Billy. Emotional, ridiculous, and intense, he is the true (bewitched) embodiment of Cancer. He loved Winnie in life, but he cheated on her. She murders him, for which he holds a grudge... even though it's his fault. He's funny, he's sad, he's motivated by emotion four centuries later. Dude's Cancer to the core.

As a trio, the Sanderson sisters form the perfect Leo: They're dramatic, demanding, and dead set on one goal. Divided, their traits vary, but combined, the witches are image-obsessed, haughty, and entitled. A little attention goes a long way with these gals, and likely with you too, Leo.

Sassy, intelligent, and kind of a killjoy, little Dani Dennison is a true Virgo-in-training. She balances her Halloween fun with practicality, somewhat falls for the spirit of a teenage boy what's trapped in a cat, and feigns innocence to meddle with her brother's crush when he's being a pill. Dani Dennison suffers no fools. She may also have some grumpy years ahead of her.

Libra: Guy In The Devil Costume

Libra, the Scales, is too often thought of as the sign of justice. They're actually far more complicated; Libras have terrible anxiety, but thrive on attention. This dude in a devil costume (portrayed by director Garry Marshall!) is so psyched to be randomly worshipped by the Sanderson sisters, he invites them to hang out at his home. Why not? If they high-key swear fealty to him, they must be chill, right? Keep up that crazy imbalance, Libras.

Unpredictable, secretive, and hot? Alluring, mysterious, and fun in a way that makes you a little nervous? That's Allison; that's a Scorpio.

Sagittarians are artistic, cheerful, and seemingly incapable of making a plan. They're unaffected by the future; their spirit thrives in the moment. Mary is obviously smart, and the most comforting of the Sanderson sisters, but her methods of reassurance are designed to help herself first. Hey, she's still a Fire sign.

Winifred Sanderson is practically too Capricorn to function. Cold, aloof, and determined, Winnie's a natural leader; she's like if an exhausted eye roll took the form of centuries-old witch. She loves her sisters, though she doesn't always tolerate them.

Fun-loving, zany, flirtatious Sarah is the truest Aquarius. Though the least "traditionally" intelligent of the three, she excels in other areas of witchery. Could Mary or Winifred pull off an actual siren song? That's gonna be a no from me, dawg. And she does it so effortlessly!

Pisces are dreamy and full of feelings; they're constantly seeking love, and believe themselves to be chronically misunderstood. At once, a Pisces is optimistic and cynical — they have a unique capacity to remain hopeful, even while self-defeating. Max Dennison, the cynic, the skeptic, the bold enough to hit on a Scorpio in front of the entire class yet also easily embarrassed: the perfect teenage Pisces.

So, whether you're an inscrutable Scorpio like Allison, or you're a Max and you just have a lot of feelings, there's a Hocus Pocus character you can relate to. Those of you on the cusp are free to choose — carefully, of course. Amok!

More like this
The 'Hocus Pocus' Sequel Finally Has A Release Date & It Makes Total Sense
By Shannon Barbour and Radhika Menon
Kimberly J. Brown & Daniel Kountz Looked Back On Their ‘Halloweentown’ Romance
By Stephanie Topacio Long
All The Sneaky Lindsay Lohan Movie Easter Eggs In Her New Ad, Explained
By Stephanie Topacio Long
Anne Hathaway’s ‘The Devil Wears Prada’ Anniversary Post Turned Political
By Brad Witter
Get Even More From Bustle — Sign Up For The Newsletter