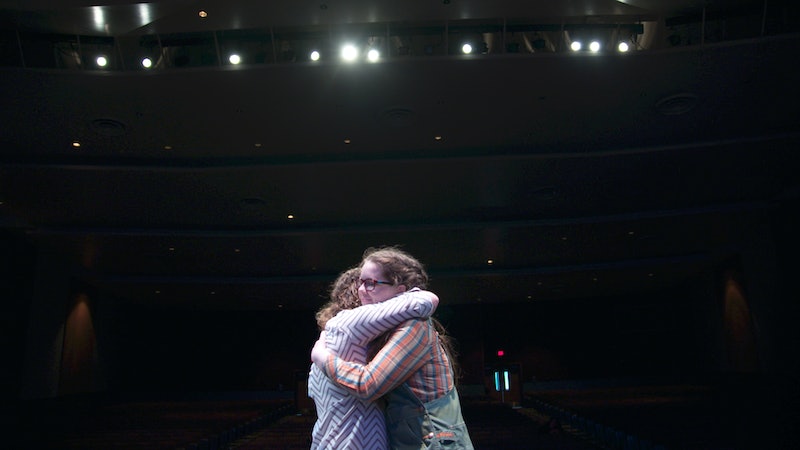 On Feb. 14, 2018, Parkland, Florida's Marjory Stoneman Douglas High School drama teacher Melody Herzfeld was directing a group of 65 drama students in a musical rehearsal when the fire alarm rang. Thinking it was just a drill, they continued to rehearse, but when the code red alarm sounded, Herzfeld rushed her students into a cramped closet, the "techy" room, as they call it, while a gunman took the lives of 17 of their fellow students and teachers. Two months after the tragedy, the students returned to school, and the drama department got back on stage. The HBO doc Song of Parkland (streaming on HBO and available on demand) shows how theater helped the surviving students heal, and drives home how important arts education is in our country, despite the fact that our current leaders think otherwise.

Directed by Amy Schatz, Song of Parkland opens on the day of the shooting, utilizing footage that some of the students shot on their cell phones, offering up a chilling first-person experience of the traumatic ordeal. But the film turns quickly to the spirited drama students, their courageous teacher, and how the musical theater production for children that they were in the process of rehearsing can help them regain some semblance of their former lives.

Throughout the course of the powerful documentary, the students continue mounting their musical production and also turn to their own songwriting as a way of processing their emotions, dealing with the aftermath of tragedy, and returning to normalcy. It's clear to see that the kids are still dealing with some serious trauma, but that they thrive once on stage, or in that rehearsal room, singing loud for all to hear.

"What they're coming with each day is the best they have, and that's OK," Herzfeld says, "They have nothing to lose." For many of the drama students, the drama department, and Herzfeld specifically, literally saved their lives, huddled in that tiny closet. But for all of them, the theater becomes the very definition of a safe space. Theater and performing provide a comfort that allows them to put on a great show, and even head to one of the biggest stages in the world. If you watched the Tony Awards last year, or saw the clip that went viral later, you would have seen many of these same students singing "Seasons of Love" from Rent and Herzfeld receiving the Tony for the Excellence in Theatre Education Award, during the June ceremony.

Much like another HBO documentary, We Are Not Done Yet, Song of Parkland shows how the arts can aid in therapeutic catharsis. In We Are Not Done Yet, veterans diagnosed with Post-Traumatic Stress Disorder used writing and performance to access their feelings and release some of their stresses. Theater and music becomes that same kind of outlet for the drama students of Marjory Stoneman Douglas High School, who were tapping into scientifically sound methods of coping with their own symptoms of PTSD. According to the North American Drama Therapy Association, drama therapy can be useful to a wide range of participants, be they abuse survivors, people with substance use disorder, those who've experienced trauma, or children or adults with Autism spectrum disorder, among other other needs.

Song of Parkland is just one example of how the arts are essential to school curriculums, and not just for therapeutic purposes, but to produce well-rounded students. Americans for the Arts points out that a student involved in the arts is four times more likely to be recognized for academic achievement, and low-income students who are highly-engaged in the arts are more than twice as likely to graduate college as their peers with no arts education.

But arts education has unfortunately been going missing from schools. As budget cuts increase, funding for arts programs have been slashed. ThinkProgress reports that "a common cost-cutting measure is to slash funding for arts education, prioritizing what are deemed more essential subjects such as math, reading, and science. Ninety seven percent of elementary schools nationwide don't offer dance, and 96 percent don't offer theater, according to Americans for the Arts.

And what little federal funding is available now is in danger under the current administration. Donald Trump reportedly wants to eliminate both the National Endowment for the Arts and the National Endowment for Humanities, per The Washington Post. Though this idea hasn't been implemented yet, as education site The 74 points out, the idea "routinely appears on Republican wish lists after the GOP wins elections." When Betsy Devos was appointed Secretary of Education, a number of education groups expressed worry at her appointment. U.S. News and World Report called Trump and Devos' proposed education budget an attack on America's schools, saying, "In addition to eliminating funding for teachers and after-school programs, the budget proposes dismantling 20 other critical programs," including the arts.

With those kind of stats, it's hard to predict what will happen to arts programs in public schools, the disappearance of which would leave this vital avenue towards healing unavailable to students who need it. Whether young people are coping with serious trauma or just dealing with everyday struggles, they need as much support as possible. And Songs of Parkland shows how immediately effective the arts can be.