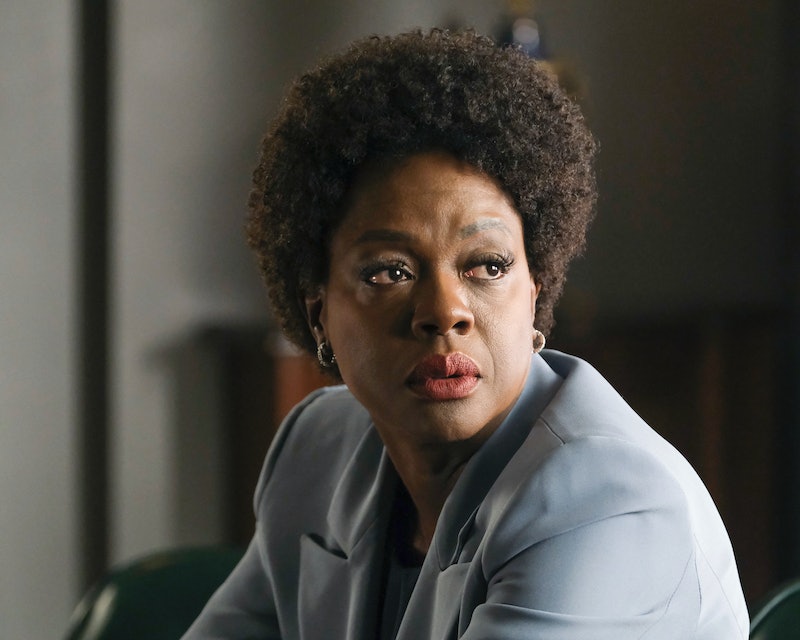 In her final rousing courtroom speech, Annalise took her "mask off," using her closing argument to explain to the jury that she may be a bad person, but she's also a survivor. She recapped everything from being sexually abused as a child and losing her unborn son to the loss of her "first love," Eve, because was "scared to death to be gay." Annalise confidently described herself as "ambitious, black, bisexual, angry, sad, strong, sensitive, scared, fierce, talented, exhausted," and now, at the jury's mercy. After an excruciatingly long pause, she was eventually given a "not guilty" verdict.

After posing the "Who killed Annalise?" question from the first episode of HTGAWM's final season, it was also revealed that her funeral takes place far into the future. The "special speaker who has known Annalise for a long time" turned out to be Eve, who eloquently eulogized her one-time love as scenes from Annalise's life — including her happily dancing with Tegan who'd earlier confessed her love — played out, ending with her as an elderly woman walking in the sun on a beach as the background faded to white.

Not everyone got such a happy ending, however. After tearfully apologizing to his half-brother "Baby Sam" at his grave, Frank (who apparently did not kill Hannah) showed up at the courthouse as Annalise was giving her post-acquittal press conference. Sensing something was wrong, Bonnie moved through the crowd but was too late to stop him from shooting Governor Birkhead as she exited the building.

The governor's security detail, in turn, shot Frank, who died in Bonnie's arms on the steps. His final words to her: "I had to make it right. Tell Annalise." Except Bonnie never got to deliver his message. As a distraught Annalise reached her most loyal friends, she realized Bonnie had been shot in the stomach, and she also met her end by Frank's side.

Wes Is *Not* Alive

Prior to the courthouse bloodbath, Laurel promised an infant Christopher that they could go somewhere new and meet new people. Fast-forward to the funeral, where the spitting image of Wes asked a gray-haired Laurel in Spanish if she wanted to say anything about Annalise. "No, but you should," she told her now-grown son.

HTGAWM ended in a true full circle moment with Christopher riding his bike onto the Middleton campus, just as his father had at the beginning of the very first episode. "Professor Christopher Castillo" introduced himself to the students of his Criminal Law 100 class "or as my mentor liked to call it, How to Get Away with Murder," he said. After he wrote those words across the chalkboard, the camera cut to Annalise's spirit smiling at him from a desk in the lecture hall.

The Remaining Members Of The Keating 5 Split Up

In her eulogy, Eve mentioned they were gathered to not only remember Annalise, but also to forgive her. Laurel turned around to see an aged Connor standing further back in the room. After drawing up divorce papers for Oliver prior to beginning his five-year prison sentence, per the terms of his FBI immunity deal for testifying against Annalise, the future timeline also revealed they'd stayed together, with the camera panning to show him standing next to an also gray-haired Oli.

It doesn't seem like the remaining members of the Keating 5 stayed in touch, however. Christopher asked Laurel who the men were, and she replied, "Old friends" with a nod and smile. Michaela didn't appear to be in attendance at Annalise's funeral, though she was shown being sworn in as a judge with two young girls, presumably her daughters, by her side. She may have lost her friends by acting in her own self-interest, but she seemed to achieve the career aspirations she'd always been chasing.

In the end, they did all get away with murder — but not without first owning up to and atoning for their sins, in one way or another.

More like this
The 'New Amsterdam' Series Finale Opens An “Unexpected” Door To The Future
By Brad Witter
'The Queen’s Gambit' Season 2 Tweet Wasn’t From Anya Taylor-Joy
By Mary Kate McGrath, Jack Irvin and Grace Wehniainen
Ashton Kutcher Wants Danny Masterson “To Be Found Innocent” In Rape Retrial
By Jake Viswanath
Pamela Anderson's Sons Brandon & Dylan Have Their Own Hollywood Careers
By Arya Roshanian
Get Even More From Bustle — Sign Up For The Newsletter
From hair trends to relationship advice, our daily newsletter has everything you need to sound like a person who’s on TikTok, even if you aren’t.