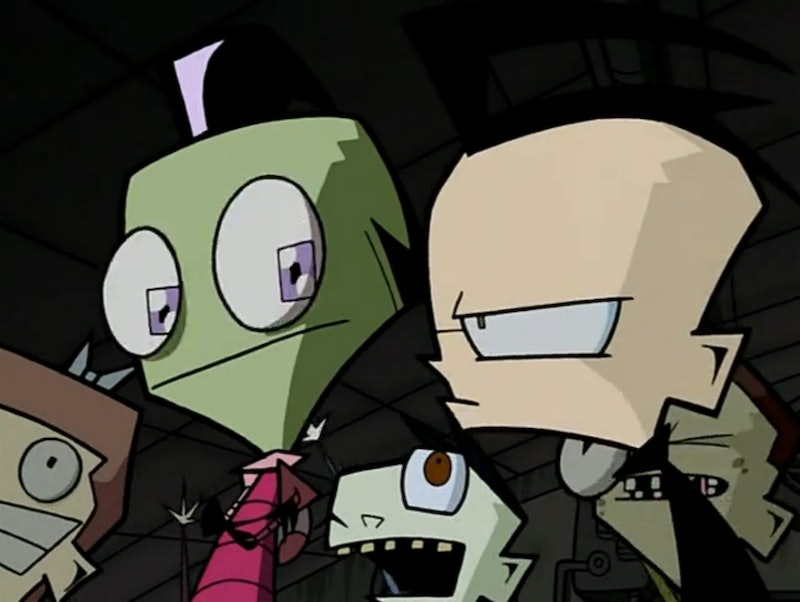 Prepare to be excited (and just ever so slightly afraid), because Nickelodeon announced that an Invader Zim TV movie is officially happening, and we already have an Invader Zim movie teaser that will punch you in the face with nostalgia. Featuring GIR and Zim trying their best to menace the human population, the teaser makes it clear that everyone's favorite extraterrestrial might have another chance at conquering planet Earth. Are you shrieking with unparalleled joy right now? Good, you absolutely should be. Because making that promise of a new Invader Zim movie on Nickelodeon all the sweeter is the fact that it's coming from the show's original creator, Jhonen Vasquez.

But if that isn't quite enough to excite you, the original main voice cast is reprising their roles, including Richard Horvitz as Zim, Rikke Simons as malfunctioning robot slave, GIR, Andy Berman as Dib, Zim’s arch-enemy, and Melissa Fahn as Dib’s meddling younger sister, Gaz. So, I mean, it's a no brainer, right? This is going to be so good. I'm in early '00s nostalgia heaven already, but watch this teaser and join me.

Following the poor, desperate, and deluded Zim as he concocts yet another disastrous scheme for destroying the Earth in order to gain accolades from his Irken leaders, the movie sounds as though it's sticking to the beloved formula of the show. Which is a good call, because, honestly, Zim's repeated alien invasion blunders provide a comedy so wondrous that they're pretty much timeless.

Like many underappreciated shows of their time, Invader Zim was canceled in 2002 after only two seasons. Despite this, however, the show continued to garner a strong cult status with fans who understood and appreciated the show's quirky, offbeat genius. In recent years, there's been a great deal of speculation online regarding a potential Invader Zim movie. So the fact it's finally, actually happening is a really big deal worth celebrating.

The announcement of the movie has also come at a timely moment for Nickelodeon, who appear to be adorably committed to making our TV nostalgia dreams come true right now. At the start of 2016, it was announced that Nickelodeon would be revisiting Hey Arnold! with the release of Hey Arnold!: The Jungle Movie, which is set to premiere this year. And as if that wasn't enough, the channel is also developing a TV special of Rocko's Modern Life, so that fans can finally enjoy the anarchic frivolity of O-Town and it's many bizarre inhabitants.

Suffice to say, we're all gonna be in Nickelodeon blissed out nostalgia mode for the rest of this year and beyond.