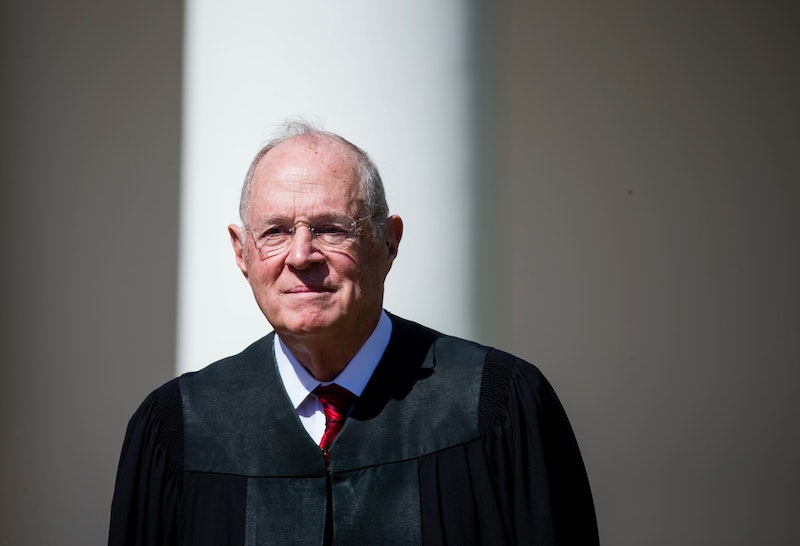 Gird your loins. On Wednesday, Justice Anthony Kennedy added one more item to the list of alarming news coming out of the United States Supreme Court this week: The bench’s reliable swing vote will be retiring on July 31. If he held any other job, the 81-year-old’s retirement would probably be considered long overdue. But as a Supreme Court justice, Kennedy’s decision to vacate his seat holds devastating implications for women nationwide. Donald Trump plans to begin the search for Kennedy's replacement "immediately," and has already laid out his short list. The themes that unify his candidates: Deeply conservative, vehemently opposed to abortion.

On the campaign trail, Trump promised to "automatically" overturn Roe v. Wade — the landmark Supreme Court decision that legalized abortion nationwide up until viability — if elected president. Luckily for everyone, he does not hold the power to do that, and as Fordham Law professor Clare Huntington told Bustle, it's difficult to overturn a constitutional decision once the court hands it down. What SCOTUS can do, however, is chip away at the original decision with the introduction of more restrictions. With respect to Roe, that's where we should worry, because a law recently enacted in Iowa could do precisely that: Walk the legal limit for abortion back from a qualified 24 weeks, to six weeks — well before most people realize they're pregnant.

"We know that with Justice Kennedy’s retirement, the alarm has been sounded on the future of civil rights in this country," Fatima Goss Graves, President and CEO of the National Women's Law Center, said in a press call Thursday. "Justice Kennedy’s vote has been so crucial, being the firewall at times for what we know is coming our way. And we also know that whoever President Trump nominates will not take that approach, in fact that is exactly his promise."

"In recent years, Justice Kennedy was the key voice and vote to say that Roe v. Wade remains the law of the land, and to reject all of those efforts, whether outright bans, or more subtle shady tactics to make sure that women do not have access to abortion," Goss Graves said. That his departure puts abortion rights in question, she continued, is "not a theoretical concern."

And the timing could not be worse, thanks to a particularly extreme law that anti-abortion activists always envisioned as an eventual challenge to Roe.

In early May, Iowa Gov. Kim Reynolds enacted a so-called "fetal heartbeat" bill, banning abortion statewide at the point when a physician can detect what sounds like a heartbeat on an ultrasound. Anti-choice politicians do not concern themselves with the fact that fetuses don't have hearts at this stage; the sole goal here is to narrow the legal abortion window to around six weeks — and as Goss Graves put it, "That’s effectively a ban on abortion."

Legislators in Iowa did add last-minute exceptions for victims of rape and incest, but regardless, many people won't realize they're pregnant at six weeks. Lawmakers know this. And they also know that a deliberate infringement on a constitutional right — to seek an abortion up to roughly 24 weeks — will likely meet immediate challenge. Iowa Rep. Steve King, who drafted the six-week ban, did so with the expressed agenda of placing the law before the nation's highest bench. As he told Politico, "I wrote the heartbeat bill to go before the court after the next appointment at the Supreme Court."

Now, King gets to watch his plan play out. On May 15, the American Civil Liberties Union, Planned Parenthood of the Heartland, and the Emma Goldman Clinic of Iowa City announced a joint lawsuit to block the measure. As the Des Moines Register reported, the case isn't guaranteed to go before the U.S. Supreme Court: The organizations chose to do battle in state court because they want to keep the decision out of SCOTUS's hands. However, if the case makes it to the Iowa Supreme Court, and if those justices invoke Roe or any other federal case in their decision, SCOTUS could take up the heartbeat law. Its backers' intention, Goss Graves says, is to "get to the heart of Roe."

Iowa's heartbeat law, she continued, could be on track to make it to the Supreme Court within the next two years. It's not the only restrictive law wending its way through the judicial system, but six-week bans do warrant particular pause. In recent years, Goss Graves explained, legislators often attempted to cloak restrictions in access barriers they (erroneously) insisted would serve the health and safety of patient and fetus. "With Justice Kennedy, [as] we saw in Whole Woman’s Health, he was able to see through that," she said. "He was able to see through these sham laws that were ostensibly neutral on their face but absolutely meant that more and more women would not have access to abortion care."

But in the current climate — under an administration that has taken a clear and hostile stance to a legal procedure — some lawmakers aren't even bothering with the farce anymore. Rather, Goss Graves said, they're cutting straight to the chase: Laws that make abortion illegal by default.

Whatever the heartbeat case's fate, though, Goss Graves expects it will embolden similarly motivated lawmakers to go for the jugular.

"Make no mistake, [Kennedy's] retirement means the balance of the court will shift," she added. "People will be motivated by the idea that there is a Supreme Court with, as Trump said, a guarantee to overturn Roe."

More like this
How To Protect Your Digital Privacy If You Need An Abortion Post Roe v. Wade
By Kaitlyn Wylde
An Honest Review Of The TikTok-Famous WalkingPad
By Kaitlyn Wylde
10 Times Boris Johnson Got It Wrong On Trans Rights
By El Hunt and Sam Ramsden
Plan C Vs. Plan B: What's The Difference?
By Lexi Inks
Get Even More From Bustle — Sign Up For The Newsletter