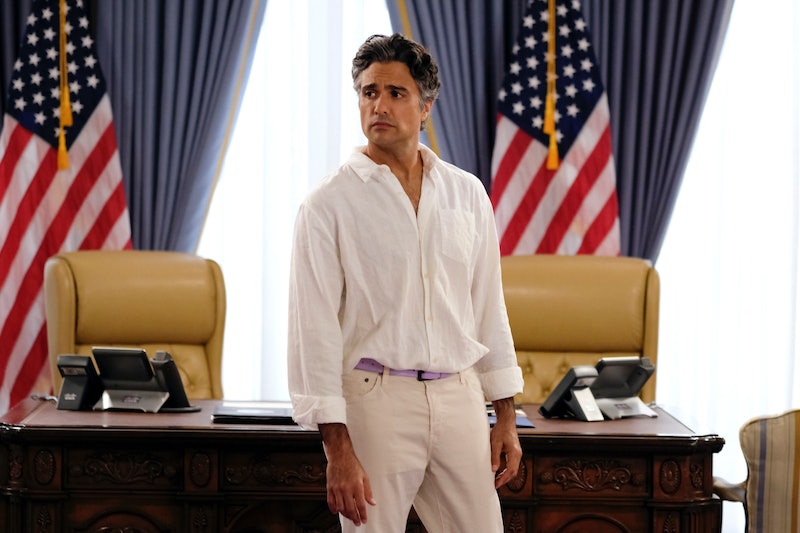 In typical Jane The Virgin fashion, "Chapter Eighty-Four" got pretty meta when the TV show within a show reflected the real life issue of the gender and racial wage gap. real life issues. When Xiomara (Andrea Navedo) tells Rogelio (Jamie Camil) that he earns much less than his co-star River Fields (Brooke Shields), she says that he could probably get River to take a public stance in support of him demanding pay equity. Ro takes her up on the idea and over all, Jane the Virgin's pay gap episode tackled the issue in an intersectional and meaningful way.

Xo convinces Ro by mentioning that real life actors William H. Macy and Bradley Cooper pledged to fight for equal pay for their female co-stars and were widely supported for it. She offers that River would likely be open to doing the same thing for her co-stars (especially if it eventually leads to good press). Although unsure at first, Ro eventually does convince River to take a stand for him and the rest of their co-stars. In the process, the show explored not just the gender wage gap, but the racial wage gap, too.

Rogelio absolutely should earn just as much money as River Fields, if not more, considering that The Passions of Steve and Brenda wouldn't exist without Rogelio's tenacious effort to bring the telenovela to the U.S. It's unfair that Rivers is making more money than him off of his show, which comes from his culture, as he aptly points out. The scenes in which Ro grapples with the pay disparity news challenge viewers to not blindly support a woman's higher earning power when she's obviously benefitting from white privilege.

The term "equal pay" is so often associated with inequality experienced by women specifically, when the issue is much more nuanced than that. Just earlier this month on April 2, the U.S. recognized Equal Pay Day, which highlights the differences in women's average earning's to men's and most people with social media have probably seen the handy infographics like the one below which focuses on the differences in average salaries for women of all races. When talking about the concept of wage inequality, it's most often framed as a women's issue, which is why, at first River Fields doesn't want to publicly denounce her higher salary, as it's easy to see that as a feminist win — if you're not looking at it from an intersectional perspective, that is.

River initially refuses Rogelio's request for public support and explain that she's accepting a higher paycheck as a way of breaking the wage inequality status quo that sets women behind. But eventually she comes around and does support Rogelio by speaking about the racial wage gap for the fictional magazine in the show, People En Español. From a distance, Chapter Eighty-Four might seem to champion a man's entitlement to earn as much as a woman, or as if the episode problematizes a woman who earns more than a man when that so rarely happens, Rogelio's own marginalization as an immigrant plays an important part in the equation.

Jane the Virgin so often portrays the moments like this episode's in which the Villanueva family feels like outsiders, and it's why viewers tune in. Wednesday's episode really came through by providing an important lesson about intersectionality and the immigrant experience while also a perfectly silly scenario filled with unintended injuries and dramatic monologues.