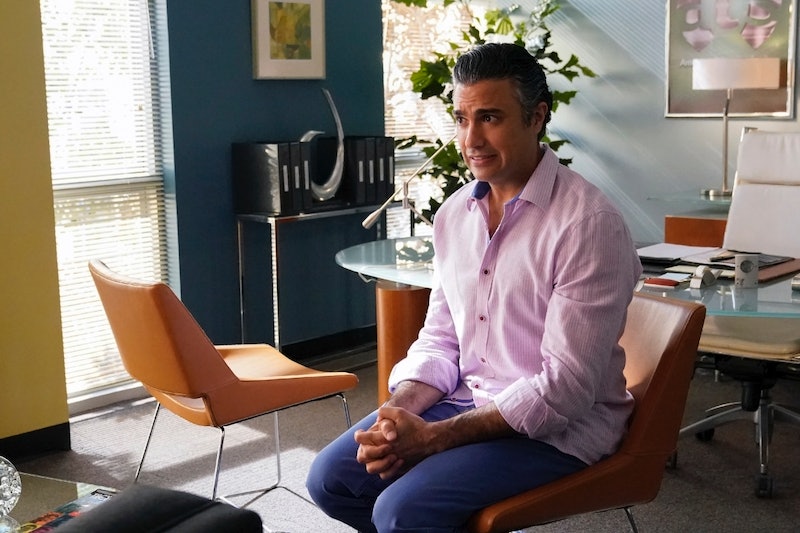 As the saying goes, all good things must come to an end. And that couldn't be more true for the impending final season of Jane The Virgin. Sure, it'll be bittersweet to say goodbye to the CW series, but at the same time, fans will finally learn how the show, known for so many twists and turns, will wrap up. Even one of the stars, Jaime Camil, wants to know how it ends. Because as it turns out, Camil, who plays Rogelio on Jane the Virgin, is also in the dark about what's in store for his character, Jane, Rafael, Michael (again?), and everyone else fans have grown to love

During a phone call last fall, Camil explains that series creator, Jennie Snyder Urman doesn't keep the cast in "her circle of trust," meaning, he has no clue what's going to happen in the final season. When I ask if he can give any hints about the show's return on March 27, he sincerely says he cannot. "It's no joke. Jennie doesn't tell us what's going to happen on the next episodes." He even reassures me that he's not just saying that to play coy — if I were to ask any of his costars, they'd say the exact same thing.

As it turns out, the cast is not only kept out of the loop on upcoming storylines, but they usually don't find out about a huge twist (like when fans finally learned who Sin Rostro was, or when Michael came back from the dead) until they're at a table read.

When Michael (played by Brett Dier) returned after his character's supposed death in Season 4, the cast was just as blindsided as fans were by the reveal. Camil explains, "When we reached the last page, we were like, 'It doesn't make any sense. Is this the end?' We all look at each other like, 'What the hell is going on?' Then Jennie took out the last page, and continued to read, and without talking, Brett Dier walks into the room, and we're like, 'What?!'"

There's even a video that Urman tweeted out in April, capturing that emotional moment:

"We were equally surprised, like the audience was watching the show," Camil says. He has no negative feelings about not knowing upcoming storylines either; in fact, he calls Urman's method "brilliant" and says this keeps their acting "fresh."

So, what can he mention about that Michael twist? Something that'll instantly warm your heart. He suspects it'll be fun to "bring back the bromance" between Michael and Rogelio, which the actor jokes is "the real love story of the show." (Sorry, Jane!)

Another plot that'll likely develop is that of Rogelio and Brooke Shields' character, River Fields, trying to bring their telenovela to the mainstream market. "I'm sure the fans will get a good laugh out of that situation," he offers.

Despite not knowing any concrete turns the series may take, one thing is for sure: They're in good hands. As Camil points out, this was the plan all along.

"We respect Jennie Urman and her vision [so much]," he says. "Since day one, she knew and was super clear that Jane The Virgin would have a life-span of five seasons... It was very clear since the beginning that Jane would have 100 episodes and no more."

Urman isn't the only person Camil gives credit to — he's a huge fan of his on-screen offspring Jane, played by Gina Rodriguez. Rodriguez even directed episodes of Jane The Virgin, and per her costar, she's "a natural." Camil also praises the directing of Justin Baldoni, who plays Rafael.

"Working with them in front of the camera is, of course, a joy," Camil says, "but it so happens that they are amazing directors as well." Yeah, you might think he's just saying that 'cause they work together. But Camil makes clear he's not BS-ing. "If they sucked, I would tell you, because we love each other that much," he teases.

And that's why the bittersweet ending isn't too bitter. He knows they'll stay close off-screen, and it's been such a meaningful journey. "Of course, we're super sad that a beautiful show that is super cleverly written and so successful and so well-produced is coming to an end," Camil acknowledges. "But we take the positive side of it... because you've got to celebrate life and what this show represents."

Jane The Virgin is filled with twists, turns, and plenty of heart. So even if fans don't know how the series is going to end, it's all for the best — especially since the cast is totally in the same boat. You can take Camil's word for it.

More like this
At 14, D'Arcy Carden Was Sneaking Out To Parties & Crying Over Kurt Cobain
By Ivana Rihter
In Rap Sh!t, Social Media Has Main Character Energy
By Aramide Tinubu
At 28, Tisha Campbell Was Newly Married & Dancing Through A Career Pivot
By Grace Wehniainen
At 14, Melissa Barrera Was Planning Her Quinceañera & Falling In Love With Musical Theater
By Gabrielle Bondi
Get Even More From Bustle — Sign Up For The Newsletter