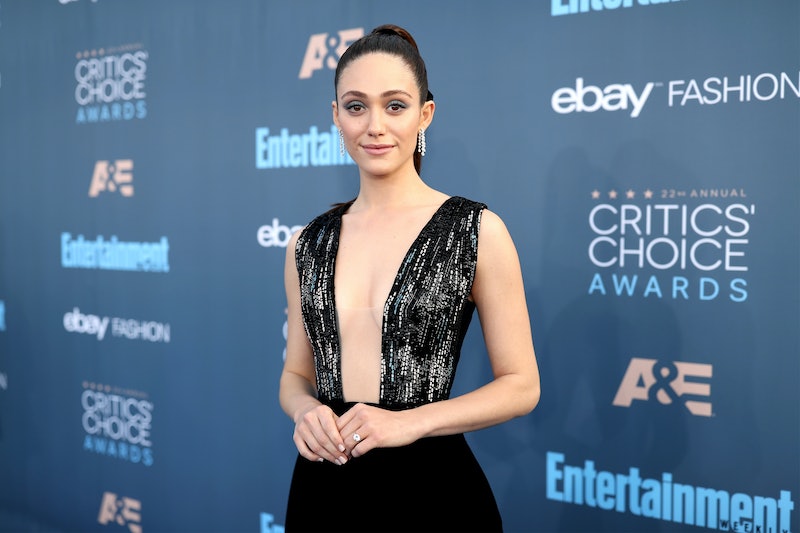 After an intense week of negotiations, Shameless star Emmy Rossum's fight for equal pay has come to a happy end. Rossum took to Twitter to reveal she will be back for Season 8, all but confirming Showtime may have made Rossum the highest paid star on Shameless. According to The Hollywood Reporter, Rossum was locked in negotiations for a sizable pay raise for Season 8 that would not only equal the pay of her veteran actor co-star William H. Macy, but surpass it. Rossum reportedly argued she deserved to be compensated for all the years Macy was paid so much more than she was, despite her crucial role as the series' protagonist — and she was absolutely right.

For the past seven seasons of Shameless, Rossum's Fiona Gallagher has taken no prisoners in her pursuit to keep her siblings together. She has cleaned sewer tanks, served tables, and ran a daycare out of her home to make ends meet, and in the process, she's proven she is the tough, flawed hero that keeps Shameless fans coming back for more. Rossum pours her soul into Fiona for Showtime, and the fact that she may not have been paid accordingly for her stunning work is probably the most shameful thing Shameless has ever done.

In Season 1, it made sense for Macy to be paid more than a cast of relative unknowns. He came into Shameless as a certified movie star with the Oscar nomination to prove it. As the series was originally conceived, Frank was supposed to be the alcoholic, drug-addled patriarch all the Gallaghers orbited, but it was not long before it was clear Rossum is Shameless ' true star. While Macy's name recognition has earned him his share of award nominations, critics and fans have been raving about the nuanced work of Rossum since the series began. The show could survive without Frank, who is often off in his own subplots completely divorced from the Gallagher family, but a Shameless without Fiona is unimaginable.

Rossum's fight for pay commensurate to the leading work she has been doing for the past seven seasons highlights just how real the gender wage gap continues to be. Yes, Macy came into the show with more experience, but Rossum emerged as the clear lead in a show that is at the center of Showtime's lineup way back in Season 2. Seniority only counts for so much; Rossum is younger than Macy, but her work on the show is just as substantial. By revealing her struggle for appropriate pay to the media and fans, Rossum made it clear she was not going to back down, and her boldness is inspiring. Even Macy had nothing but respect for Rossum standing strong during her pay negotiations. "She works as hard as I do," Macy told TMZ. "She deserves everything."

Rossum took a major risk when she made her case for a higher salary — since Shameless is an ensemble show, there was a small chance Showtime could have fired her and attempted to continue Shameless without Fiona, if negotiations fell apart. This is a risk women in Hollywood and in other industries take every time they ask for the same pay as their male counterparts. The fear of being fired holds many women back from demanding equal pay, but Rossum knew her worth. Asking to be paid in accordance to the work you are doing should never feel like a risk, and when women like Rossum push back against the notion that they are replaceable, it gives other women the confidence to do the same thing.

Rossum joins a growing list of stars who are no longer willing to stay quiet while Hollywood perpetuates the gender pay gap. Jennifer Lawrence, Robin Wright, and Meryl Streep are just a few of the women who have spoken out about the pay gap in Hollywood. Rossum's victory brings women one step closer to closing the gap by finding the confidence to negotiate for the salary they deserve. By channeling her inner Fiona, Rossum not only got the raise she so deserved, but she helped move the industry closer to equality.

More like this
Amanda Gorman Shared A Powerful Message On Meghan Markle’s Penultimate Podcast
By Darshita Goyal
Our First Look At 'Vardy V Rooney: A Courtroom Drama' Doesn’t Disappoint
By Bustle UK
Owen Warner's Net Worth Might Surprise 'I'm A Celeb' Fans
By Sam Ramsden
'Gilmore Girls’ Lauren Graham Just Revived Our Hopes For A New Reunion
By El Hunt
Get Even More From Bustle — Sign Up For The Newsletter