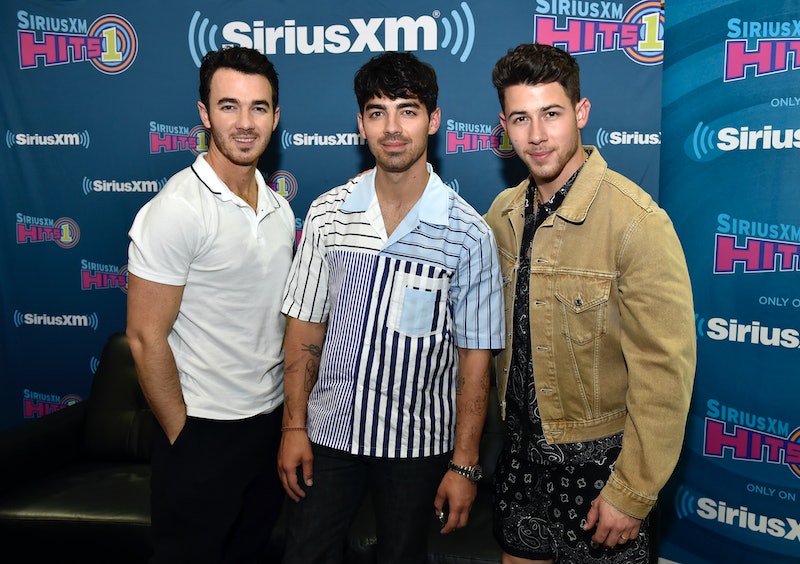 Oh, how the tables have turned. When 2019 dawned a mere five months ago, I never could have predicted that this would be the year of The Jonas Brothers comeback. But with their band reunited after a six year hiatus, their new album, Happiness Begins, poised to be released on June 7, and the announcement that the Jonas Brothers memoir, Blood, will be released on Nov. 12, 2019 by Macmillan, I can no longer deny that Joe, Kevin and Nick have truly got this year on lock. Bustle has all the details about the upcoming memoir below!

When The Jonas Brothers first hit the music scene back in 2005, they were Disney darlings and the teen stars of hit movies like Camp Rock and their own Disney Channel Original series. They released four albums in four years, sold over 17 million records worldwide, and earned both the Grammy Award for Best New Artist and the award for Breakthrough Artist at the American Music Awards. Their musical accolades were perhaps overshadowed only by their tabloid presence, with articles about their romantic relationships — who could forget the oft-talked about purity rings? — and personal lives splashed across the front pages of gossip magazines and websites.

But it was in 2013 that the trio truly shocked fans, when they announced that they had disbanded the Jonas Brothers to focus on solo pursuits. Rumors of brotherly strife soon followed, but none of the three Jonases have ever told the full story of their rocky road to success, their subsequent breakup, and their decision to reunite — until now.

In Blood, Joe Jonas, Kevin Jonas, and Nick Jonas are ready to tell their story. According to Macmillan, the memoir will detail the incredible true story of the band's creation, phenomenal rise to superstardom, breakup at the height of their fame, and their reunification. Though the band have been open about their past struggles in recent interviews, Blood will be the first time that their story will be told in full, unfiltered, and in all three brothers' voices.

Written with Neil Strauss, author of the Motley Crue biography,The Dirt, Blood will finally answer readers' biggest questions about one of the most successful modern pop bands in the world. You'll have to wait until Nov. 12 to get your hands on this juicy read, but in the meantime you can always check out the Jonas Brothers documentary on Amazon Prime, and rewatch the Sucker music video again... and again.