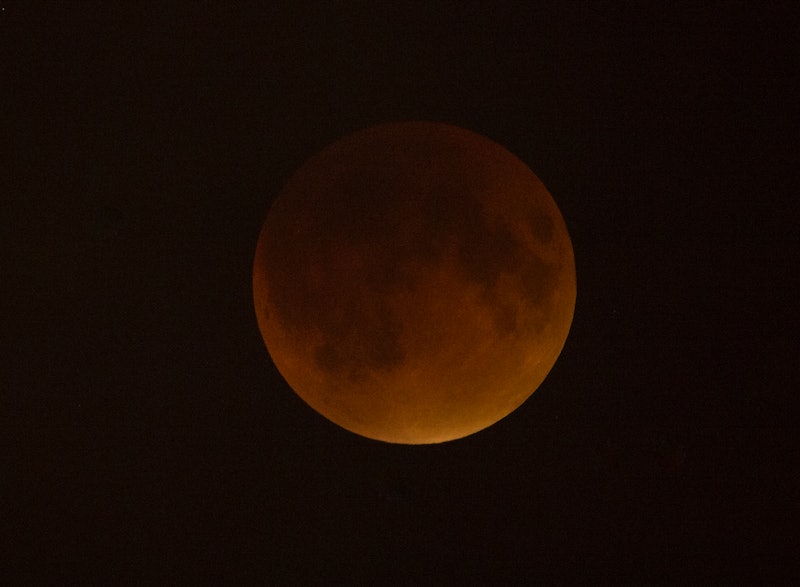 The month of the July is filled with some pretty exciting astrological activity. First Mars went retrograde at the end of June, a period which lasts through July and into August. Then there was the July new moon that happened to fall on Friday the 13th (spooky!). Now we're looking forward to July's full moon (called the Buck Moon), which is happening on Jul. 27, and also happens to be a total lunar eclipse (aka a Blood Moon), as well as a micro full moon. Oh, and on top of that, Mercury goes retrograde on Jul. 25. Whew! This definitely isn't something that happens all the time, especially the eclipse part. To put it in perspective, you have to think about how the July Buck Moon is also a total lunar eclipse, as well as how often total lunar eclipses happen.

A total lunar eclipse is also known as a Blood Moon. Due to Earth's shadow on the moon, the moon will appear red or red-brown instead of its usual white. The next total lunar eclipse will happen on January 19, 2019 and will be visible from North and South America, Europe, and Africa.

The total lunar eclipse in July 2018 is extra special because it's the longest total lunar eclipse of this century. The total phase of the eclipse will last one hour and 43 minutes, and from start to finish, the entire event will last nearly four hours. It will be visible to people in Africa, the Middle East, southern Asia, and the Indian Ocean region (as long as the skies are clear, of course).

This particular moon is also known as the Buck Moon, a name given by the Algonquin tribes. In ancient times, Native Americans used the moon cycle to keep track of the seasons, since they didn't have calendars yet. They picked the names based on events and things that occurred during that time. The July full moon is called the Buck Moon because it's at this time of the month that male deer start to grow back their antlers. Bucks shed their antlers each year, and in July, their antlers grow back. Deer were extremely important to the Algonquin tribes, as they were used as food and clothing, so it makes sense that they chose this name. The July full moon is always referred to as a Buck Moon.

Lastly, this month's full moon is also a micro full moon. The point in the Moon's orbit farthest from Earth is called "apogee." When a full moon occurs around apogee, it's called a micro full moon. Those who keep track of the moon on a regular basis will notice that it appears to be slightly smaller than usual. The next micro full moon will happen on September 14, 2019. It happens about once a year, so it isn't super rare.

More like this
Here's Your Horoscope For December 2022
By Alexandria Lettman
Emily Ratajkowski & Pete Davidson's Astrological Compatibility, Revealed
By Nina Kahn
Angel Number 808 Is A Symbol Of Your Potential
By Nina Kahn
These 4 Zodiac Signs Have Naturally Inquisitive Souls
By Nina Kahn
Get Even More From Bustle — Sign Up For The Newsletter