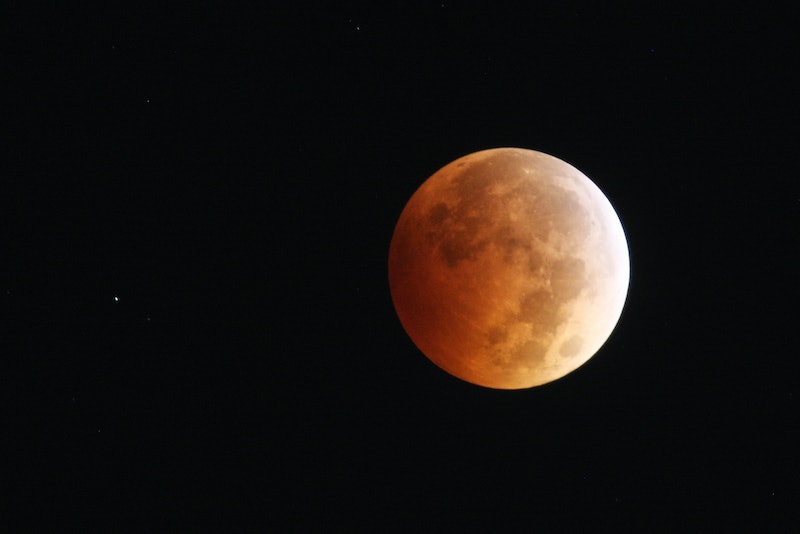 On Jan. 31, the night sky will play host to a total lunar eclipse. The special display of celestial wonder is quite a sight to behold. If you are around that night, catching a glimpse of the moon as it is eclipsed might not give you great Instagram pictures, we've all failed at taking a good picture of the moon on our phones, but it will remind you how beautiful the universe can be. If you're unable to catch the total lunar eclipse when it occurs on Jan. 31 at the same time as a super moon and a blue moon, don't worry though — a total lunar eclipse on it's own is not super rare. (Though, it's worth mentioning that a super blue blood moon, which is what's occurring on Jan. 31, hasn't happened in over 150 years.) So, how often does a total lunar eclipse happen?

So what causes a total lunar eclipse in the first place? A total lunar eclipse occurs when the sun, Earth and moon are in a perfect line with the Earth between the two, enveloping the moon in it's shadow. A total lunar eclipse can only occur when there is a full moon. When the shadow reaches totality the moon may appear slightly red. This is actually thanks to Earth's atmosphere. The light from the sun refracts and red is minimally absorbed, reflecting onto the moon.

Another reason total lunar eclipses are able to happen so frequently is because the moon is currently at the perfect distance from Earth for eclipses. Since it's creation, four and a half billion years ago, the moon has been gradually moving away from the Earth and has reached the ideal spot.

The Trifecta Of Lunar Events Taking Place On Jan. 31

A super moon occurs when the moon becomes full while it is at least 90 percent to it's closest distance to Earth within it's rotation. This means that the moon must become full no farther than 226,000 miles away from Earth. You will recognize a super moon, as it will be bigger and brighter than an ordinary full moon.

The total lunar eclipse will be visible at any location on Earth where it's night when it happens. While there will be view of a partial eclipse as the moon approaches and moves away from the Earth's shadow, the total eclipse will last anywhere from a few seconds to over an hour and a half. Additionally, the moon will appear to have a slight reddish, "blood"-colored tinge to it, hence this moon being called the super blue blood moon.

So step outside on Jan. 31, and soak in the beauty of the sky. We could all use some more celestial wonder in our lives.

More like this
The Summer Solstice Spiritual Meaning, Explained
By Jessica Booth and Brittany Beringer
Your July 2022 Monthly Tarot Reading
By Jezmina Von Thiele
Here’s Your Horoscope For July 2022
By Alexandria Lettman
Are Cancer & Cancer Compatible In A Relationship?
By Kristine Fellizar
Get Even More From Bustle — Sign Up For The Newsletter