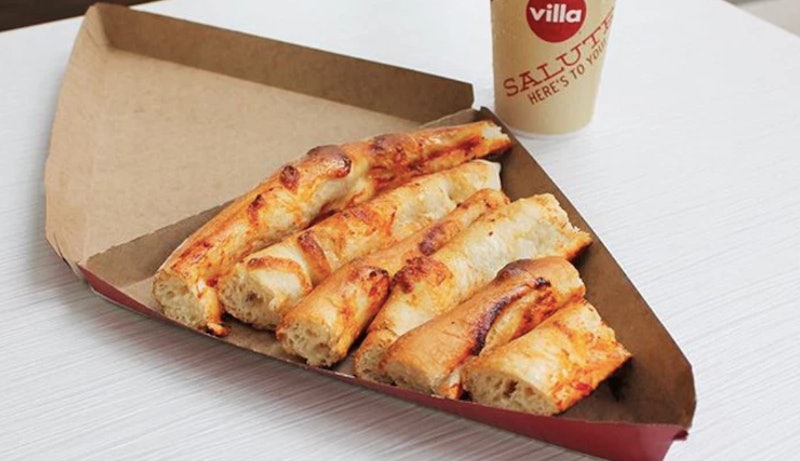 You're either going to love this — or you're going to hate it. Because let's be honest, when it comes to a slice of pizza there two types of people in this world. And I'm not even talking about the pineapple topping issue. Are you someone who leaves the crusts behind after you devour your pizza or are you someone who swears that they're the best part? Because now, you can get Just The Crust, as in an order of crust and nothing but crust. Take a minute to think about that. No cheese, no sauce — just crust.

The (maybe evil) geniuses behind this idea are the folks at Villa Italian Kitchen, a popular group of pizza restaurants who feel very strongly about their delicious, carb-y, crusts. So strongly, they think you should be able to get them all on their own.

The perfect idea for some people — and judging by the stir this has already created online, a terrible idea for others. I personally think that a slice of pizza already has the perfect amount of crust on it and that this is an abomination of nature and the golden ratio, but I guess some people (who are wrong) will enjoy it. Some people, without souls, won't even miss the cheese or the sauce. They'll just be fine. They are monsters.

According to an Instagram post from the company, it looks as though they'll be serving the crusts in the traditional pizza shape — even in a little pizza slice container. I'm having trouble figuring out why you wouldn't just order a few portions of delicious, delicious breadsticks or garlic bread if you need that carb hit, but some people are very strongly in favor of pizza crusts — and those people deserve love, too.

You'll be able to get these delicious crusts from Villa Italian Kitchen from July 18, with the price starting at just $2.75 per order. That's $2.75 of pure, sweet carbohydrates.

Of course, when it comes to anything to do with pizza the debates and opinions can get very heated in a hurry. People swear by their favorite brands, their favorite topping combinations, even the best way to serve or reheat your slice. Luckily, there is really, truly a pizza for everyone.

Feeling romantic? California Pizza Kitchen came up with heart-shaped pizzas for Valentine's Day. Feeling lazy? There's a pizza box designed to let you eat pizza in bed. Want convenience? Even Panera is testing pizzas now. EVERY EVENTUALLY IS COVERED. Seriously, we live in a world where Pizza Huts in the U.K. put jackfruit on their pizza — 2019 is an amazing time to be alive. Now take a bite of your pizza wedding bouquet, marry your favorite pizza toppings, and just call it a day.

Are you all about the crusts or do you normally leave them behind? The Just The Crust option from Villa Italian Kitchen is sure to divide people but, hey, you might just find out who your real friends are. Good luck, pizza lovers.